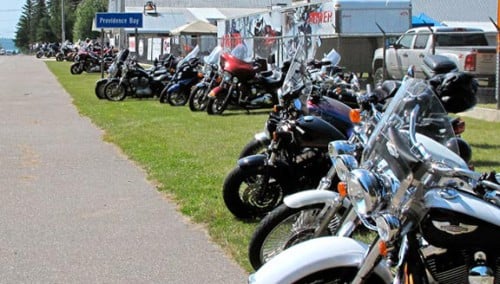 MINDEMOYA—Central Manitoulin Councillor Derek Stephens’ attempt to lighten the mood ahead of a council motion on an application by the Providence Bay/Spring Bay Lions Club and the organizers of Ride Manitoulin to allow grounds-wide consumption of alcohol on their liquor licence by plunking a bottle of scotch on the table and declaring “I love liquor, I love scotch,” backfired when Reeve Gerry Strong registered that he was offended by the presentation of liquor at the council meeting and that he considered the action to be inappropriate. “I find it personally objectionable,” he said.

Councillor Stephens countered that there was nothing in the council bylaws proscribing his use of the bottle of liquor as a prop.

Councillor Stephens was speaking in favour of the motion to grant the liquor licence application, asserting that allowing Ride Manitoulin participants to wander the grounds of the event drink in hand was safer and promoted more responsible drinking than confining revellers under a single roof or tent. “I think we do have to look at our policy,” he said. Councillor Stephens said that he felt it was unfortunate that there were two groups (the sponsoring Providence Bay/Spring Bay Lions Club and the Providence Bay Agricultural Society) who objected to a licenced event taking place on their property, which have done a lot for the community, had found themselves at loggerheads over the issue. “I feel it is unfortunate that there are hard feelings,” he said.

Councillor Patricia MacDonald said that she was very impressed by the presentation made by the Lions Club and the Ride Manitoulin organizers and their security personnel. “They seem very confident on their ability to maintain control,” she said. She noted that she felt that the confinement of alcohol consumption to a tent encourages binge drinking. “People will sit and drink their four drinks at once before they go off to watch the events,” she said.

Reeve Strong noted that although he was unlikely to get a vote on the motion, he saw the event last year and was not concerned about the security of the event, but said he felt it was important that the council look at their alcohol licencing policy going forward. “We need to set up a policy that is fair to everyone,” he said.

Councillor Beverly Cannard-Pearson said she was concerned with events getting larger and that the approach must be effective. “If you are going to confine adults they will act like children,” she said. “If you let them out into a bigger area, they will act like adults.”

“Time is of the essence,” said Councillor Ted Taylor, noting that in any event the organizers needed a clear answer to move forward with their application.

In the end, it was the history of the event being held over the past two years under the new regulations without serious incident which won the day for the application from the Lions and Ride Manitoulin.

Councillor Gloria Haner was the soul voice registering concern over the motion, maintaining that allowing the use of alcohol, particularly on that portion of the grounds where an emergency access road lies and within the bleachers, was inviting tragedy. “You can’t have people drinking while they are walking over the bleachers, it is hard enough to get up and down those things safely,” she said.

In the recorded vote called by Councillor Haner, only she registered a nay on the motion and it passed five to one. Councillor Adam McDonald was absent from the council meeting. On a recorded vote the reeve must also cast a vote on a motion.