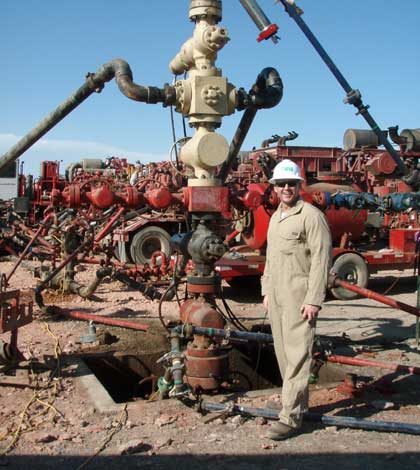 MANITOULIN—The Chiefs of Ontario have made it clear they are opposed to fracking taking place anywhere in Ontario, including Manitoulin.

“We are not going to allow it,” stated Patrick Madahbee, grand council chief of the Anishinabek First Nation after a Chiefs of Ontario special assembly last week. “The Chiefs of Ontario have passed a motion against any fracking taking place in any of our communities in Ontario, including Manitoulin and there is widespread opposition to it (fracking).”

“We’ve talked to Premier Kathleen Wynne to make our concerns known,” said Chief Madahbee. “It is crazy, this practice can ruin water tables in any area it is carried out in and everyone has to drink from the same water sources.”

“We are going to fight any fracking taking place,” agreed Glen Hare, deputy grand chief of the Anishinabek First Nation. “Not just for Manitoulin but all of Ontario. Fracking needs to stop and on behalf of all of our communities we are saying no to it.”

Mike Wilton of Spring Bay attended the American Water Resources Association annual general meeting this past week where this issue was also raised. “I’ve been concerned with the issue of fracking for some time now. I found out at the meeting of companies looking at undertaking fracking, and carrying out explorations using a lot of different chemicals; that because they are patented, they don’t have to say what the chemicals are.” He said British Columbia is the only Canadian province to have a fracking registry.

Mr. Wilton also pointed out the province of Quebec has banned fracking and First Nations in New Brunswick are attempting to follow suit. But there has been nothing for Ontario. He noted that Manitoulin Island sits on fractured limestone and is situated on Lake Huron. “A past history of gas and oil wells in this type of strata and on Manitoulin Island itself leads me to concluded that there is every chance that fracking exploration will be attempted here.”

As reported in last week’s edition of The Manitoulin Expositor, concerns over the possibility of the controversial oil and gas extraction technology known as fracking taking place on Manitoulin Island have been heating up with the revelation in the fall edition of the Council of Canadians magazine Canadian Perspectives that the Ontario Geological Survey (OGS) drilled test holes near Little Current in 2012.

The information that drilling conducted was buried in the OGS publication ‘Summary of Field Work and Other Activities for 2012, Section 29 on the Potential Ordovician Shale Gas Units in Southern Ontario’ and revealed in an online blog by the Council of Canadians’ water campaigner Emma Lui, who also wrote the magazine article. The OGS is part of the Ministry of Northern Development and Mines.

“To be honest, I don’t really understand how it all relates,” said Ms. Lui of the drilling program and its results. “But the concern is that a number of things started about three years ago that has seen public money going into this exploration work before any kind of public discussion has taken place with the people of Ontario.”

Ms. Lui noted that the provincial government has committed to reviewing the rules governing fracking in Ontario as recently as this past January. As yet no fracking is taking place in Ontario.

Mr. Wilton said, “the (long) list of chemical compounds that may be permanently introduced to our ground water aquifer during such exploratory and development operations is truly intimidating.”

“As was pointed out in the story in The Expositor last week, they snuck through exploration on Manitoulin Island and no one knew this was happening, which is pretty damn serious,” stated Mr. Wilton. “People always want to say it is up to groups to rally and lobby against things like this, but each individual needs to do something, lobby the government against fracking.”