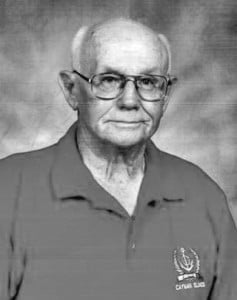 In loving memory of Alvin Pickard, a resident of the Manitoulin Lodge, who died at Manitoulin Health Centre, Mindemoya, on Friday, March 29, 2013 at the age of 93 years. He was born at Ice Lake, son of the late Robert and Elizabeth (Brandow) Pickard. He had worked as an auto mechanic for 60 years. Alvin had a variety of hobbies and interests which included craft skills, musical skills, artistic talents and enjoyed hunting, fishing, gardening, trapping, playing cards and was very involved in his community. Alvin will be especially remembered for his sense of humour. He will be sadly missed but many memories will be cherished by all who knew him. Alvin was predeceased by his beloved wife Helen (Strain) Pickard. He is survived by special long-time friend of Elenore Kane of Gore Bay. Loving and loved father of Donna Kay and husband Doug McDonald of Silver Water, Bonnie, husband Danny Henry of Silver Water, Marie, husband John Leeney of Espanola, Charles, wife Lynn Marshall of Red Deer, Alberta and Faith of Toronto. Proud grandfather of 11 grandchildren, 13 great-grandchildren and 10 extended great-grandchildren. Predeceased by grandson Jamie Henry. Alvin was predeceased by siblings and their spouses Laura (Nelson Rowe), Robert (Agnes Alexander), Earl, John (Gladys McArthur), Norman (Ida Noland), Elizabeth (John Robertson), George and Cecil (Joyce Dalgleish). Survived by George’s wife Margaret (McArthur) Pickard of Manitoulin Lodge. Also survived by many generations of nieces and nephews. Friends called at the Culgin Funeral Home from 5 pm to 9 pm on Sunday, March 31, 2013. The funeral service to celebrate Alvin’s life was conducted in the Wm. G. Turner Chapel on Monday April 1, 2013 at 11 am with Pastor Erwin Thompson officiating. Spring interment in Silver Lake Cemetery. If so desired, donations to the Lung Association, the Heart and Stroke Foundation or the West Manitoulin Cancer Society would be appreciated. Online condolences may be left at www.culginfuneralhome.ca. Culgin Funeral Home, Gore Bay, 705-282-2270.