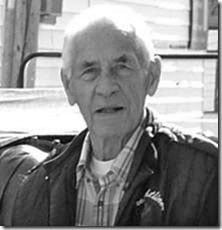 In loving memory of Godfrey Patterson, a resident of Gore Bay, who died suddenly and peacefully at the Manitoulin Lodge on Wednesday, March 27, 2013 at the age of 90 years. Godfrey was born at Providence Bay, son of Gertrude Patterson. He had worked as an auto body mechanic for many years. He had a number of interests and hobbies, which included hunting, woodcutting, playing cards and fixing up old cars. Godfrey and Celia had been the first managers at the Manitoulin Island Country Club, running it for many years. Godfrey was predeceased by his beloved wife Celia on September 14, 2012. Loved and loving father of Errol and Penny Patterson of Blind River, Dave and Bonnie Patterson of Gore Bay, Doug and Irene Patterson of Peterborough, Jack Patterson of Tottenham and Perry Patterson and partner Todd Bolivar of Gore Bay. Predeceased by an infant daughter. Proud grandfather of eight grandchildren and two great-grandchildren. Dear brother of Jack and Jim. Friends called at the Culgin Funeral Home on Saturday, March 30, 2013 from 10 am to 11 am. Funeral Service to celebrate Goff’s life was conducted in the Wm. G. Turner Chapel at 11 am with Mr. Lyle Dewar officiating. Cremation with the burial of ashes beside his beloved Celia in Providence Bay Cemetery. If so desired, donations to the Gore Bay Medical Centre or the charity of your choice would be appreciated. Online condolences may be left at www.culginfuneralhome.ca. Culgin Funeral Home, Gore Bay, 705-282-2270.