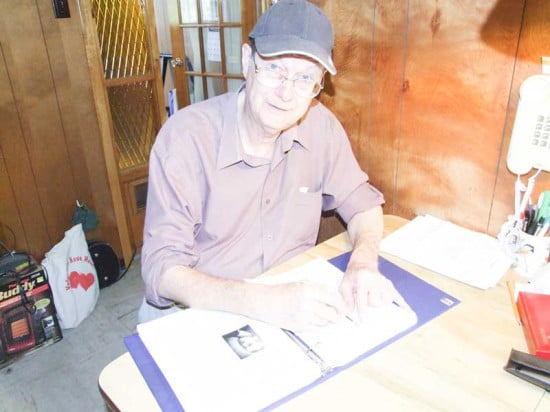 LITTLE CURRENT—Whenever a question of Island history arises in The Expositor office there is one name that springs unbidden to everyone’s lips, Alexander (Sandy) McGillivray. Little Current’s resident historian chronicled the Island’s past within The Expositor’s pages in his column The Little Current Story and has proven to be a wellspring of information about the region’s past. Now, his collected columns have been edited, updated and revised into a 800-page volume, appropriately also entitled The Little Current Story.

“I thought it would only be for one year,” said Mr. McGillivray. “If I had thought it would be as many years as it turned out, I might have been reluctant to start.” Had that happened, Little Current and the Island would have been much the poorer.

Mr. McGillivray was chair of Little Current’s centennial celebration committee. “At one point I suggested that someone should write a history of the town,” he said. “Well, when someone makes a suggestion like that, you can guess what happened next.” The columns began and continued long beyond the original estimate, but Mr. McGillivray had no problem finding things to write about.

In fact, there was so much material that he found he needed to organize them into categories and heading in order to bring them into a comprehensive theme beyond simply the history of the town.

“I thought it would be easier when I got into it,” he said. “I decided to divide it up into topics of five-year periods.” Business changes, health care developments, how welfare changed down through the years provided fodder for the writing mill. “You take welfare for instance,” said Ms. McGillivray. “Around the 1890s you could put the whole thing in a peanut shell. People who fell on hard times had to depend on their friends and relatives to look after them.”

Mr. McGillivray recalled a significant government grant that assisted with the centennial heritage project and the people who made things happen. Jennifer Billsborough was the first director and then Honorine Wright took over from her,” he said. “The heritage project began in 1989 and the columns in 1990.”

Flashing forward to little more than three years ago, Little Current’s Norma Hughson was talking to her Genealogical Society friend Marilyn Irish of Burlington about the columns and the wealth of information contained within. Ms. Irish’s Island connection is through the storied Manitoulin names of Lindsley and Dinsmore. “My friend said ‘it is really sad that these are not all in one issue,’” said Ms. Hughson. “I asked her ‘are you offering to type them?’” Three years later, the compiled, typed, edited, revised, retyped, re-edited, proofed, reproofed and re-edited copy was laid out, reproofed, re-edited and corrected into the final product, due to arrive this week.

Mr. McGillivray spent countless hours hovered over binders of typed copy, checking references and revising the copy to a form more appropriate to a reference book. “Sandy would have put a reference to ‘Joe Blow’s house’ in his column and everyone in town would know who Joe Blow was and where he lived, but in the meantime Joe Blow would have died and only a few people would remember where he lived,” said Ms. Hughson. “So Sandy would go through and change the reference to a house and street number.”

The immense amount of work was one very significant part of the project, but Mr. McGillivray places the bulk of the credit onto Ms. Hughson and Ms. Irish. “It would never have happened without their work,” he said. Ms. Hughson was quick to dispel that sentiment. “This was not a solo project,” she said. “I would type and scan and shoot pictures,” she admitted, but adding that “Sandy did all the writing, the editing and revising.”

There was also a significant amount of research that needed to be done. “We had a lot of the columns at the museum and a lot of the pictures, but there were also a lot we didn’t have,” she said. But each copy of the column was tracked down and each can be found at the Northeast Town public library on microfilm.

As to the column text so to the photographs. Each gem uncovered in the archives needed to be scanned and often they required some assistance to be ready for prime time. “Some were in such poor shape,” said Ms. Hughson. “We already had some experience working with photographs with Photoshop, but there is only so much you can do.” By all accounts, Ms. Hughson and company did manage to whip most of the photos into outstanding shape, but the carpenter sees the slightest flaw in a joint.

Mr. McGillivray said that he decided that the book would be a great resource for people newly arrived to the town. “The longer I thought about it, I realized that there is a lot of stuff in these columns,” he said. “Recent arrivals might benefit from learning about the history.”

The large concrete supports down at Low Island, the ruins over at Picnic Island, the coal docks and the railway, all these things and more have largely lost their historical and community context. ‘The Little Current Story’ is now there to fill in those blanks.

“So I said ‘If you are willing to do all that work’ I can take it on,” said Mr. McGillivray. “If I had to pay for all of the work they wound up doing on this it would have bankrupted me. How could I say no?”

Years of back and forth discussions and emailing ensued. Mr. McGillivray is not much of one for computers, so it fell to Ms. Hughson to act as intermediary along with her other roles. “Marilyn would type it, email it to Norma, then Norma would print it out for me and I would mark the copy up by hand, then Norma would take a digital picture and email it back to Marilyn.”

“It took a lot of time to get it ‘perfect’” said Mr. McGillivray. “I put quotations around perfect because even with all of that work, there are still likely to be a few typos in there yet.”

Mr. McGillivray said the project has given him a great admiration for novelists and writers. “When you struggle to paint a picture that conveys the meaning in a minimum number of words, well, it is quite a struggle,” he said. “We had too many run-on sentences of which I am probably guilty.”

Mr. McGillivray struggled over the price of the book, hoping to provide a bit of profit for the benefit of local museums, Mr. McGillivray plans to take no reward for himself donating his considerable amount of sweat equity along with that of Ms. Hughson and Ms. Irish. His reward is in seeing the job done and Little Current’s history securely gathered together in one place for posterity.

The Little Current Story will soon be available at the Centennial Museum of Sheguiandah and The Manitoulin Expositor office in Little Current with all proceeds going to the museum. An official book launch will be held at the museum once the book arrives (the first volumes of which are anticipated this week) and the book is set to be sold for $95. Manitoulin Publishing is providing the printing of the book at cost.

“We published the original columns in our paper,” said Publisher Rick McCutcheon. “It seems only right that we assist in this project.”

Mr. McGillivray has dedicated a good portion of his life’s work in documenting the town’s history and said that he truly appreciates all of the work of those who helped make the publishing of The Little Current Story a reality. “It was a labour of love,” he said.