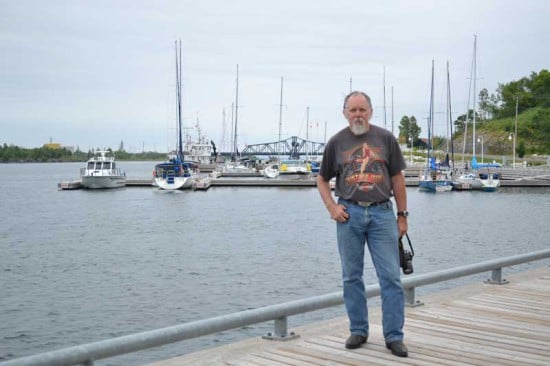 LITTLE CURRENT—Keith Hopkin’s love of trains didn’t stem from an early childhood romance with locomotives like many other railway enthusiasts, but they did peak his curiosity and by his late 20s he was captivated, joining railway associations and photographing railways and their machinery, which eventually led the Spring Bay native to begin researching Manitoulin’s rich railway history.

“I used to try and spot trains on trips to Toronto growing up, but it wasn’t like there were model trains under the Christmas tree or anything like that,” joked Mr. Hopkin when he sat down with The Expositor last week, following the unveiling of the Northeast Town’s new jigger, commemorating Little Current’s railway history. “Living in Spring Bay, we didn’t make it to Little Current very often, but I remember one time travelling to pick up a family friend at the Little Current station and seeing the train. It was a big deal and we took photos in front of the train and station.”

“Another time, my family and I had travelled to Willisville to pick blueberries,” continued Mr. Hopkin. “I was coming around the side of a rock cut and a steamer came blasting through and scared the hell out of me.” It was this same rock cut where Mr. Hopkin would later capture an image of a train in the 1970s rounding a horseshoe curve, a photograph which appeared on the cover of Branchline magazine, the Bytown Railway Society’s monthly magazine.

In the early 1970s, Mr. Hopkin said he was having lunch with family at the Ontario Science Centre in Toronto when he saw an old steam engine and three passage cars across the road.

“It was travelling on CPR’s mainline and I was amazed to see that there were still steam engines running in Canada,” said Mr. Hopkin. “I found out it was run by the Ontario Rail Association and soon after became involved. From there I began getting more involved with railway history and eventually photographing trains after buying a camera when my son was born.”

His interest in Manitoulin’s railway history was sparked by an image found in Turners of Little Current of the first train crossing the swing bridge. From there Mr. Hopkin began his research, speaking with individuals who had been connected to the railway, seeking photos and information from local historians and looking through microfilm of past Expositors.

“Georgian Bay was an important location for wealthy American tourists, who with the introduction of the railway to Manitoulin, were able to come up in their own private cars for fishing and vacations,” said Mr. Hopkin, noting the first train crossed the Little Current Swing Bridge in 1913. “It really changed the Island. Prior to the railway, everything came to the Island via steamships, which meant that people would have to last the winter, waiting for the spring for supplies. Once the railway was introduced, people had year-round access to food, supplies––everything. It would come to Little Current and then be carted off to the different communities.”

A favourite story of the area’s railway history for Mr. Hopkin is President Roosevelt’s visit to Birch Island via the Algoma Eastern Railway, a story that Mr. Hopkin has heavily researched and even written an article on for Branchline.

“In 1943, President Roosevelt came to Birch Island for fishing and relaxation amidst WWII,” explained Mr. Hopkin. “He came on his own train, arriving in late July and staying a week. It was a nine car train. His train was so important that they had it parked on the mainline and other trains would have to go around it. They even had the steam engine ready at all times to go back at a moment’s notice.”

“A special car was specifically built for the trip which had portholes on top in case the train became derailed and went into the water so that he could escape, two inch bullet proof windows and a reinforced floor in the event explosives were placed under the tracks,” continued Mr. Hopkin.

In the early ‘90s, after Canadian Pacific Railway (CPR) terminated rail service to the coal docks on Goat Island, Mr. Hopkin, along with other railway enthusiasts, mounted campaigns to save the line and run sightseeing tours.

“Unfortunately, I wasn’t able to generate enough interest and they are all gone now,” said Mr. Hopkin of the rail. “When Bill Caesar launched an effort to find a piece of railway machinery to commemorate the Island’s railway history I told him of a CPR Mikado, the model of steam engine that CPR began using in the 1930s on the line after taking over Eastern Algoma Railway, but is was over $100,000.”

Though it’s not a steam engine, Mr. Hopkin said he was thrilled that Mr. Caesar was able to obtain the jigger, which was unveiled last Sunday at the Bridge Park in Little Current.

“I think a lot of people are going to be surpised by the jigger and the fact that the swing bridge was built to bring trains across,” concluded Mr. Hopkin, adding that he was happy there would be something to help commemorate the Island’s railway history.