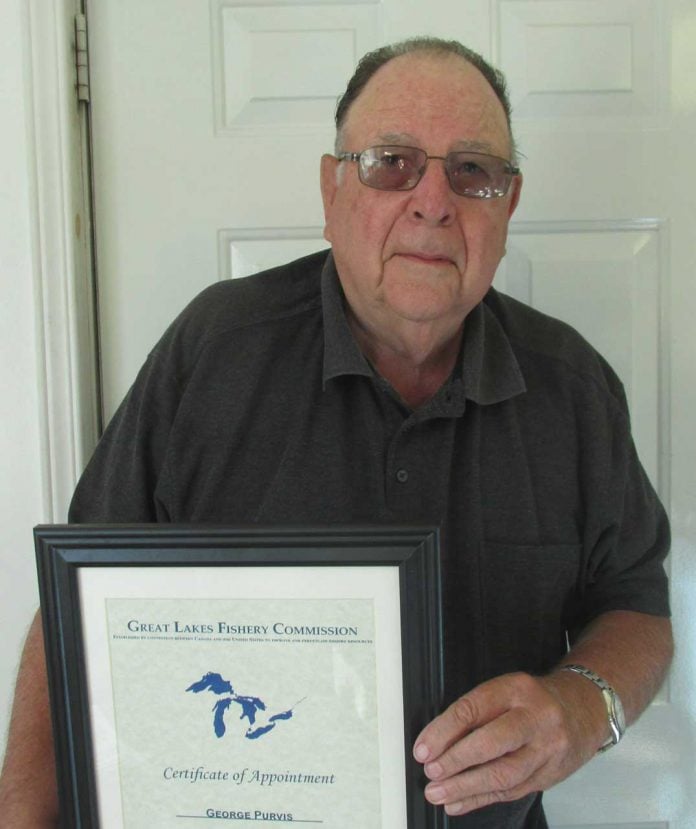 GORE BAY—Cormorant management and Canada’s Fisheries Act are just two of the issues that  members of the Committee of Advisors to the Great Lakes Fishery Commission have raised and want action taken on by the Canada and US governments, says George Purvis, who was appointed as a representative of the Canadian Committee of Advisors last November.

“One of the concerns our committee has raised is with Canada’s Fisheries Act proposals-in particular with proposed marine protected areas,” Mr. Purvis told the Recorder.

“With these protected areas they are looking at 17 percent of Canada’s Parks being protected and they now have started to look at water areas as well for protection. Two of these marine protected areas are proposed in Lake Erie and Lake Ontario and we are trying to figure out from Parks Canada what exactly will be protected. We have seen large fishing components like Fathom Five in Tobermory where recreational and commercial fishing is no longer allowed. If whole areas are made marine protected areas it will mean no fishing at all. This is something we don’t want to see and we are raising our concerns with the government on this issue.”

Another area of concern, said Mr. Purvis, is for needed cormorant management control. “I know in areas like the Les Cheneaux Islands in the US there are no fish left due to cormorants. They decimated the perch fishery for instance. And the US government had at one time allowed for a cull of cormorants, then they took this away. Now the perch fishery in that area is gone.“
“We want regulations in place to allow for some type of control on cormorant populations,” said Mr. Purvis. “We are not looking to kill all cormorants, but for regulations to be in place to allow for some type of control, so the fisheries will still exist in areas they (cormorants) are in abundance.”

Mr. Purvis said another concern with the proposed Canada Fisheries Act, “all fish will be protected, whether they are junk fish or not. In some areas this will cause the Sea Lamprey control people a problem if for instance on a river they aren’t allowed to use the same (lampricide) they use to control (sea lamprey).”

“The proposals under this legislation could be much more extensive and could pose a problem as I said for example in keeping sea lamprey under control,” said Mr.  Purvis. “The controls in place now have been very successful and the sea lamprey populations have decreased while bait fish numbers are up in the North Channel and Lake Huron.”

In a May 22press release it was noted the US and Canadian advisors to the Great Lakes Fishery Commission recently came together to discuss a number of issues pertaining to the Great Lakes fishery during the Commission’s annual meeting in Toronto. The committee of advisors is comprised of citizens who represent varied interests, including recreational and commercial fishing, academia, local and tribal governments, and the public-at-large. The Committee of Advisors meets regularly to consider issues, share information and provide input to governments about the management of the shared Great Lakes fishery.

This year, the committee passed three bi-national resolutions pertaining to issues effecting the entire basin. One was a resolution in support of double-crested cormorant management. “Over the past three decades, populations of double-crested cormorants have increased extensively and, in some areas, are having a significant negative impact on fisheries,” a release notes. “An adult cormorant consumes approximately one pound (0.45 kg.) of fish, including alewife, yellow perch and smallmouth bass per day.”

“Cormorants are protected by the Migratory Bird Treaty Act in the US and The Fish and Wildlife Conservation Act in Ontario. Due to these legal protections, there are few tools available to manage growing populations, despite their negative impacts on fisheries, which result in significant economic loss, loss of jobs; property damage and enormous ecological, social and cultural impacts.”

The Canadian and US Committee of Advisors resolution strongly urges the Commission to take a role in advocating and lending long-term support for policies and measurements of cormorant management, where populations have been shown to negatively impact the fishery and the ecosystem. They are also calling on all involved parties to work together to develop an over-arching long-term plan for Great Lakes-wide cormorant control.

A resolution was also passed regarding implementation of the  proposed Canada Fisheries Act calling on the GLFC to work with Fisheries and Oceans Canada and Ontario Ministry of Natural Resources and Forestry to develop strategies to rehabilitate fish stocks, control AIS, prioritize fish habitat restoration acts, and coordinate recovery actions for species at risk. The resolution also urged the Commission to advocate for the dedication of Great Lakes-specific funds for implementation of the revised Fisheries Act in the Great Lakes basins.