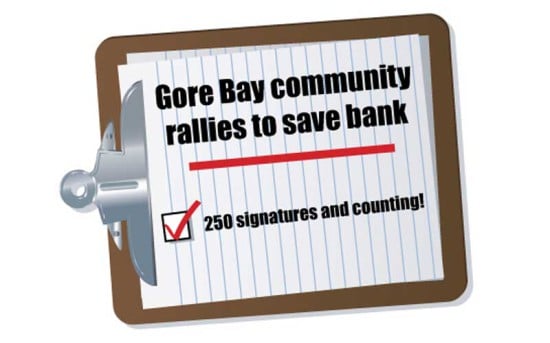 GORE BAY—Last week, residents of the Town of Gore Bay and area learned the news that the Espanola and District Credit Union, which has been a mainstay on the community’s front street for nearly 30 years, will be closing its doors with the branch moving to Mindemoya.

The decision to leave Gore Bay wasn’t an easy one, said Espanola and District Credit Union CEO Lindsay Liske, but it was supported unanimously by the board of directors, among them the six members from Manitoulin. (There are nine members in total on the Credit Union’s board of directors.)

This news has Carol Robertson, proprietor of Robertson’s IDA and the next door neighbour of the Credit Union, and a group of concerned citizens upset enough to draft a petition which has circulated Gore Bay businesses since Thursday afternoon, already garnering upwards of 250 signatures by Monday.

Ms. Robertson, a long time member of the Credit Union, told The Expositor that one of the most distressing elements of the closure is the fact the announcement was made without the consult of the member/owners. “Their website calls members shareholders and part owners of the company—this is the appeal of being a member, that you have say in the way the company is run,” she said. “But we had no say. The decision was already made.”

“We’ve been looking at the move, of opening a branch in Mindemoya, for the past nine years,” Mr. Liske said, noting that the original intention of the Credit Union was to have three Manitoulin branches, but a steady decline in business in Gore Bay has forced that institution to close. “It was purely a business decision.”

The move and closure will not take place until the fall and all three Gore Bay branch employees will have the opportunity to keep their jobs and commute daily to Mindemoya, Mr. Liske explained.

There are currently 840 members of the branch (almost the population of Gore Bay) and the Credit Union is hoping they will retain at least 30 percent of their clients with the move.

“We did 19 loans last year and three times that amount in Little Current,” Mr. Liske said, noting that business at the Gore Bay branch has been in a steady decline for some time.

He admitted that the membership was not consulted before coming to this decision, choosing to use the Island newspapers to get the message out instead.

The financial reasoning behind closing the branch just doesn’t fly with Ms. Robertson. “They give reasons of a steady decrease in loans from the Gore Bay branch, but had they informed their membership of this, perhaps we could have come up with a solution for the problem,” she said.

Ms. Robertson noted that Jeff Heitkamp, a member of the group petitioning to keep the branch in Gore Bay, called numerous businesses in Gore Bay, asking if they had ever been approached about a loan from the Credit Union. The answer each time was no. “A lack of loans is not a valid reason,” she continued. “They realized the problem, but didn’t try to solve it.”

The Expositor noted that Ms. Robertson has become a champion for Gore Bay’s downtown, recently saving the Stedman’s V&S store from closure by taking on the franchise. “I love our town, I love Gore Bay,” she responded. “I think Gore Bay has a lot to offer and I believe great growth is in our future.”

Ms. Robertson and Mr. Heitkamp attended the Credit Union board of directors meeting in Espanola Monday night, bringing forward their concerns and even presenting the board with 12 letters from members, each urging the board to rethink their decision.

A survey of Central Manitoulin residents showed an “overwhelming request” to have a branch in Mindemoya, the CEO said. “That’s where the growth is—the growth is in Central Manitoulin,” he added, noting the numerous new building developments that have gone on in the municipality, both business and residential.

“Deposit growth has always been good, don’t get me wrong, but it’s the loan growth,” Mr. Liske said, giving the example of 35 loans in 2008 with a yearly decline to 19 loans in 2012. “It’s also the demographics. Gore Bay has an aging population that is just not borrowing.”

The Credit Union is looking at two locations in Mindemoya, but will not say where they are just yet. As for the building in Gore Bay, the location will appear on the market in the fall, after the move.

The Expositor contacted Richard Stephens of Providence Bay who sat on the Credit Union board until last year and served many years as its chair. He had been a strong proponent of a Mindemoya branch. He said he thought it was unfortunate that the Gore Bay branch had to close, but was pleased that the Credit Union would finally be hanging its shingle in his neck of the woods. “It’s just the growth in Mindemoya,” Mr. Stephens said of the move. “I certainly wish them well and look forward to working with them.”

“It’s a gain for Central Manitoulin, but a loss for Gore Bay,” said Central Manitoulin Reeve Gerry Strong. “I hate to see it at the cost of someone else. We weren’t involved in the decision, it was strictly financial.”

Mr. Liske said that one of the downfalls in Gore Bay was that while the Credit Union may have had over 800 members, it was largely used for savings. “We didn’t get all their eggs in our basket,” he said. With the move to Mindemoya, the Credit Union is working on new strategies and marketing to ensure that Central Manitoulin residents know they offer a full slate of banking services, Mr. Liske said.

Ms. Robertson said she is doubtful that the Credit Union will be able to retain 30 percent of its West End membership once it leaves, and urges the board not to be “overly hopeful” of having an easy time of getting new members in Mindemoya with a well-established banking institution already in town. “It’s great to expand for Mindemoya, but horrible the way they’re doing it,” she said.

“This is going to be very hard on our town,” Ms. Robertson continued. “They’ve done a great disservice to the people of this town that have been very loyal to them over the years.”

The Espanola and District Credit Union’s regional expansion was, in fact, to Manitoulin nearly 30 years ago when it merged with the old Little Credit Union and, about a year later, with Gore Bay’s Manitoulin Credit Union. Each of these volunteer-operated local credit unions was close to 40 years old at the time of amalgamation.

At the time of these amalgamations, the Espanola and District Credit Union committed to eventually providing full-service banking to the communities whose small local credit unions had been absorbed in the amalgamation process. This was accomplished, with full-time branches in Little Current and Gore Bay, by the mid-1980s.

Ms. Robertson said that while it seemed the closure of the Gore Bay branch was a done deal, she remains hopeful that some board members will still change their minds and rethink their decision.