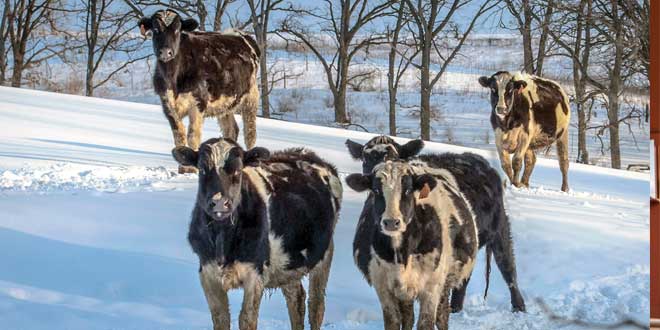 Local dairy farmers and their operations were recognized for outstanding quality in their milk operations and production. A gold certificate was presented to Jim and Alex Anstice. Mr. Seguin explained that to reach a gold level of milk quality was an outstanding accomplishment. “The requirements for a gold certificate are that bactoscan (bacteria) levels are under 10,000,” he said. “Under 10,000 is exceptionally good.”

The Bactoscan is a measurement of the number of bacteria present in milk. High bacteria levels reduce the shelf life of liquid milk and may affect the ability to produce good quality cheese. There are also legal requirements set by the EU in order for the milk to be suitable for human consumption, currently set at a maximum of 100,000. Other targets are set by the milk buyer with financial penalties for producers that go over the predetermined level set out in their contract. This provides an incentive to farmers to be as hygienic as possible and give the manufacturer an acceptable product to pass on to the consumer. However, a low Bactoscan is also desirable as it can reflect good parlour management, a clean environment and a low level of mastitis in the herd.

Northern dairy farmers consistently produce milk of very high quality. “To maintain those levels of quality an operation really has to be up to snuff on every level of milk production,” said Mr. Seguin. “Every level is tested. It is really a sign that our milk supply in Northern Ontario is something to be really proud of. In most areas in the North 48 percent of the producers received a certificate,” he said. “It sets the bar pretty high. I have some regions in the North where 70 percent of the producers receive a certificate and 40 percent receive a gold.”

“It speaks very highly to the public in ensuring that the product is safe and that it comes from healthy and comfortable cows,” concluded Mr. Seguin.