﻿PROVIDENCE BAY—The Dewar family’s eighth annual maple syrup auction has broken another record, with this year’s winning bid being the highest yet!

As was reported in last week’s edition of The Expositor, the annual auction was held between Monday and 6 pm last Friday. The winning bidder receives the first litre of maple syrup produced by the Dewar family and all funds raised through the auction, through bids and donations, goes to the Northern Cancer Foundation.

“Our goal this year was to make it past the $10,000 mark overall,” said Mr. Dewar. “It’s the generosity of the Manitoulin Island people who follow the auction and participate that make it such a success. A lot of people watch every year and make a bid. And we can boast that we had a bid of $1,200 on a litre of our maple syrup.” 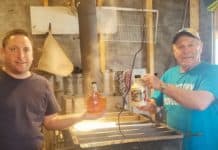 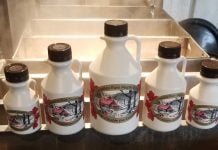 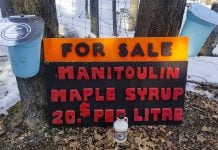 Giving back at syrup auction is a sweet gesture