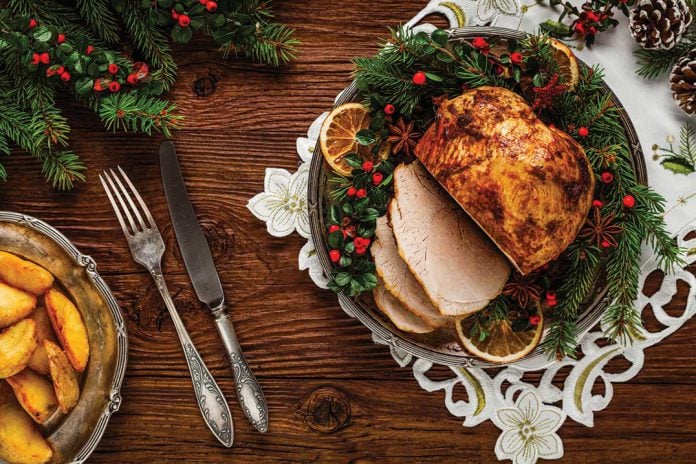 LITTLE CURRENT—When Jodie and Jason Elliott discovered that the annual free turkey dinner in Little Current would not be going ahead this year they decided to take on the event themselves. Fueled by an amazingly successful Gourmet Hot Dog night on December 18, where over 200 of the delicious Max Burt local hot dogs were served, topped by a wide range of high end garnishes, more than 100 people were served a hot turkey dinner the following Tuesday evening.

“The turkey dinner went really well,” said Ms. Elliott who, along with her husband and staff, turned the 100 pounds of donated turkeys provided by Rodney Deforge into delicious dinners for those who might not enjoy a Christmas turkey dinner otherwise.

“The turnout in the restaurant itself wasn’t all that large,” noted Ms. Elliott, “but we had about 40 dinners picked up for delivery to people. TLC (a Little Current retirement home) plated up the rest and delivered it to people around town that couldn’t get out.”

All-in-all, more than 100 dinners were served over the course of the evening.

“We also raised about $800,” said Ms. Elliott. “That will be going to the SHARE committee at Manitoulin Secondary School where some of our staff attend.”

Ms. Elliott said that the couple, who operate Little Current’s Elliott’s Restaurant, had learned a lot from the experience. “We will be doing things a little differently next year,” she said. “Maybe we will look at toys for children or something like that.”

The couple is already planning other community events for the coming year and wanted to wish everyone who participated in the event a happy, healthy and prosperous New Year.