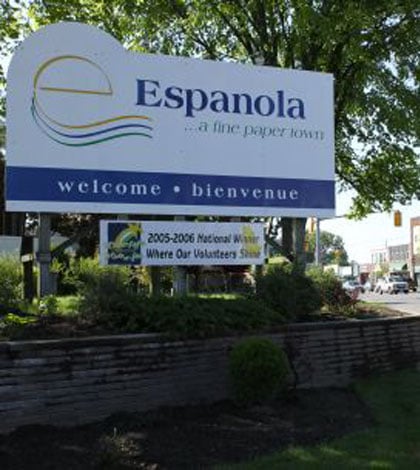 ESPANOLA—The spectre of load restriction on Highway 6 leading into the Town of Espanola is casting a pall over Island municipalities and businesses that depend on Manitoulin and Birch Island’s only year-round land link to the mainland.

The issue came to a head when the provincial government announced that it would be discontinuing its Connecting Link program and projects under that program would be rolled into the Municipal Infrastructure Investment Initiative (MIII).

The culvert in question lies at Darkie Creek at the bottom of the hill coming into Espanola from the south on Highway 6. Traffic on that portion of roadway is predominantly coming and going from the Island and Birch Island in the winter time and includes the substantial ferry traffic of the summer season and therein lies the rub.

“That roadway is the main link to Birch Island and Manitoulin and we don’t think it is fair that the taxpayers of Espanola should be footing the bill for the province to make the repairs,” said Espanola Deputy Mayor Jill Beer.

The municipality had applied for funding for the repairs under the now defunct Connecting Link program and had made another application to the MIII program for a different project involving the town’s water and sewer system. “The MIII program is basically a lottery system and we weren’t successful with that application either,” said Ms. Beer.

Municipalities were informed of the cancellation of the Connecting Link program in January, 2013. “Expressions of interest for the MIII funding were due January 9,” said Espanola clerk/treasurer Cynthia Townsend. “Not knowing in advance that this program would be discontinued, we had applied for a water and sewer project which we were also not successful in. Our mayor (Mike Lehoux) immediately followed up with a letter, but I cannot recall if we ever received a response.”

Oddly, the MIII funding is administered by the Ontario Ministry of Agriculture and Rural Affairs (OMAFRA).

“Mayor Lehoux met with Minister Glen Murray, Minister of Transportation/Minister of Infrastructure on July 26 in North Bay,” noted Ms. Townsend. “We followed up with a letter August 14 and again on September 13.”

“Knowing we were out of luck in funding, we had budgeted approximately $1,080,000 for this project in the 2013 budget,” explained Ms. Townsend. “This amount included work to address the safety concerns on the adjacent boardwalk. However, when bids were received the project actually came in at approximately $1.5 million. In our current financial situation, we just cannot fund this difference. Council has initiated an engineering study as would be required to implement half loading to preserve the existing life of the culvert. An engineering study in 2012 recommended the replacement of this culvert due to the poor condition at that time.”

But even without the bid shortfall, the question of who should shoulder the cost of the repairs is a sore point with the Espanola council. “We really shouldn’t have to be going to our taxpayers to fund what is really a provincial highway,” noted Ms. Beer. “This should be paid for by the province.”

Compounding the issue, repairing the culvert in question is complicated by the presence of a critical wetland beside and beneath the highway. “In consideration of the presence of the Blanding’s turtle habitat it was recommended to us that work not commence until after September 30,” noted Ms. Townsend. “Therefore work was scheduled to start October 1. We have since been advised by the MNR that there may be ways to mitigate the environmental concerns, however now we will soon be into winter. With a lack of required funds it looks like it will be next year if we do not hear back from the province in the next few days, which creates a huge safety concern for council.”

“We are looking at ways to extend the life of that particular culvert,” noted Ms. Beer. “If putting in place half load restrictions would extend the life and safety of that portion of roadway, it is something we have to consider.”

Should the culvert in that section of the highway fail, and considering that the locale of the culvert is smack dab in the middle of an endangered species habitat (the Blanding’s turtle), the situation would become extremely serious very quickly. There is literally nowhere to reroute traffic to bypass the site.

“We can’t do any of the work on the culvert until from the end of September to when the snow flies,” said Ms. Beer. Paving when the temperatures drop below freezing is not an option.

Particularly irking to the council members has been the replacement of at least four culverts between Highway 17 and Espanola by the Ministry of Transportation, not to mention the bridgework at the railroad tracks in Nairn Centre.

Ms. Beer said that it was unclear if the province would allow the municipality to put road restrictions in place, but if the engineering report indicates that the only other alternative would be a catastrophic failure, there may be little other choice.

A load restriction could have a severe impact on the operations of several companies, including Fisher Wavy, Manitoulin Transport and Lafarge locally, as well as a number of smaller timber and quarry operations.

“It would impact our operations and it won’t happen,” said Lafarge Terminal manager Howie Scruton. “We have to have full loads. The access to the highway was one of the reasons we chose this location 40 years ago,” he added. “With all of the goods flowing into and off of Manitoulin Island, that is the only way in or out.”

“I think it would have a definite negative impact on any of the local business community,” agreed businessman Jeff Wallace, chair of Fisher Wavy Inc, which operates an extensive harbour off of Highway 6 south of Espanola. “I am not aware of any of the Queen’s Highways that operate under restricted loads.”

“This, to us, is just a game the city has to play with the province,” said Mr. Scruton. “They have lost a lot of revenue lately and when that happens, how do you fix the roads? That being said, the province should be the ones dealing with this. They (the municipality) can’t be expected to pay for this. To my mind, the entire road between Highway 17 and Highway 6 south of Espanola should be a provincial highway. The road goes right through their town. Sure they get some benefit from that, but not enough to be able to take this kind of project on by themselves.”

Mr. Scruton said that Lafarge had received a letter about the matter, but he did not believe it should be up to the private sector to fix the problem.

“The culvert needs to be addressed and replaced,” said Mr. Wallace.

“Lafarge wants the culvert fixed,” agreed Mr. Scruton. “We have to have it fixed. No business can operate on half loads.”