Gore Bay really comes into its own in summer. Suddenly, (or so it seems) the waterfront comes alive with happy outdoor activity. Complementing the bustling main street vibe of shops, restaurants and services, a whole other dimension unfolds down on the bay at this time of year.

Water Street runs the length of the v-shaped bay held within two bluffs–an old-fashioned wooden boardwalk meanders from one end of the bay to the other. From the Inn at Gore Bay with its guest rooms and 1890 Restaurant beneath the East Bluff at the south end, to the far side of the marina at the north, the boardwalk weaves along the shoreline, a distance of perhaps two kilometres. Walk along here to discover the marshlands of Bickell’s Creek, the new children’s playground with tall waterspout for surprise sprinklings, the tennis courts, the Red Roof Pavilion, now home to Purvis Fish and Chips (opening in July). The marina is chock-full of gleaming white boats at anchor, masts tinkling in the breeze; the marina store is stocked with smoked fish and soft ice cream, maps and boating supplies and Canadian Yacht Charters (CYC) is in full swing for the season.

Here, across the street, is Gore Bay’s oldest standing hotel, the Queen’s Inn (1888), charmingly restored and prettily situated on a small rise that is the beginning of the slope of the West Bluff. At the time of Gore Bay’s incorporation in 1890, this area was the hub of commercial activity centering around busy shipping docks and fishing operations, and Borron Street to the south of the Queen’s Inn led to the large homes of the town’s founders. A walk up this hill reveals many of this era’s homes in leafy grounds and a little further up, the limestone courthouse built when Gore Bay became the judicial seat of the Island in 1889, sided by the old jailer’s home, now an award-winning museum of settler artifacts and modern gallery for contemporary art exhibitions.

Carrying on along Water Street past the boat yards and CYC’s sprawling marina headquarters, the vista opens up wide into the North Channel of Lake Huron and the quartzite hills of LaCloche on the far north shore.

This part of the waterfront offers much of interest, but let’s take a beach break first, right here at Gore Bay’s little sandy getaway on the edge of all the goings-on. Take a right at the end of the marina’s boat slips to a little sign behind Buoys’ Eatery with patio serving craft pizzas and beers under sail-shaped awnings. The Gore Bay Rotary Beach sign points up to a deck that overlooks the beach, where you can get the lay of the land and gaze at the deeply forested heights of the East Bluff and the gliding sailboats below while planning your dip.

The best way to get to the beach is around the corner by the gazebo, a shady spot for a take-out lunch or picnic, with wooden steps down to another boardwalk lined with a long built-in bench under the trees. A few more steps takes you down to the small, nicely maintained sand beach and rock pier extending into the bay where youngsters like to drop a fishing line and dogs on leashes like to explore. Step-free access to the beach is at the Harbour Centre, passing under the verandah, by the washrooms and change rooms (open dependent on pandemic restrictions) and down a gentle slope to the sand and water.

Enjoy the respite, have a cooling swim, maybe take a walk out into the middle of the bay on the long, limestone boulder-lined breakwall to the right of the beach at the marina. Shore up a little energy, though, for a stroll through the huge treasure box that is the Harbour Centre’s artists’ studios, galleries and shops, next to the beach.

Here, on the spacious ground and second floors, fine artists and all manner of creative makers work year round to offer their paintings, watercolours, pottery, jewellery and leather, knitted and quilted pieces, handmade cards, soaps and salves in their welcoming individual studios and shops.

In the third floor airy and temperature-controlled William Purvis Marine Centre, aficionados of marine history and lore of the Great Lakes will be amazed by the Town of Gore Bay’s vast collection of fascinating nautical memorabilia gathered over many years by historian and curator G. I. ‘Buck’ Longhurst.

A little detour down Lighthouse Road just beyond the Harbour Centre rewards with the sight of the Janet Head Lighthouse at the very end. Built in 1879 in the ‘Georgian Bay style,’ it has the keeper’s home on the second floor and the lantern light on the top floor, reached from inside by a steep ladder up the 40-foot light tower. The beacon still turns its now-automated beam across the water in a unique sequence of flashes that identifies its location for navigation. Although the lighthouse keeper’s home has been unlived-in for years, it’s been spiffed up for guided tours of the inside (pending pandemic rules).

Back across the road from the Harbour Centre, enjoy the craft beers of Split Rail Brewing Company, made with locally sourced ingredients like oats and hawberries, under their patio umbrellas; amble around the side to Finnia Chocolate and Cacao for a local, handmade, award-winning chocolate “bean to bar” experience that includes truffles and fudgesicles.

For those who like their beach with all possible amenities close at hand, Gore Bay’s beach is hard to beat–a hidden gem tucked amidst the town’s bounty of summer leisure activities, the best of both worlds. 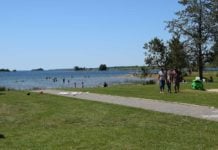