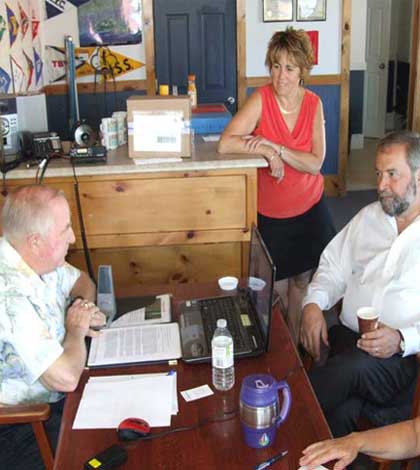 MANITOULIN—Thomas Mulcair sits quietly in the upstairs meeting room at the Anchor Inn hotel sipping a coffee as Roy Eaton conducts his daily Cruisers’ Net session on VHF radio. In a few minutes the leader of her majesty’s loyal opposition in Ottawa will take the microphone to address boaters tuning the radio sets on their boats in to the popular local boaters’ program, but for the moment Mr. Mulcair appears content to join the rest of the Cruisers’ Net crew listening intently to Mr. Eaton as he arranges assistance for a boater with a mechanical issue anchored somewhere in Georgian Bay.

This is Mr. Mulcair’s fourth visit to Northern Ontario and his first visit to Manitoulin Island and the NDP leader said he is already planning a return visit. Each of the leaders of Canada’s major political parties are out on what is colloquially referred to as the barbecue circuit, meeting and greeting ordinary Canadians on the coffee shops and main streets of the nation and Mr. Mulcair’s relaxed demeanor belies a whirlwind schedule that has seen him spend the past two days in the Sault Ste. Marie region, meeting with local union officials, municipal leaders and the North Shore Tribal council and touring Essar Steel.

Following his short shout out to the boating community, Mr. Mulcair and Algoma-Manitoulin-Kapuskasing MP Carol Hughes settle into another coffee and pain au chocolat at the Water Street Bakery on Little Current’s Water Street for an interview.

[Mr. Mulcair’s praise for Ms. Hughes is effusive. “Carol is an incredible riding MP,” he said. “Everywhere we have been on this trip, people have stopped me to take the trouble of mentioning that they don’t just see her at election time.”

With a riding one-sixth the size of France, that in itself is a considerable accomplishment.

He mentions a visit to the Tim Horton’s in Blind River on his travel across the Highway 17 corridor and stopping by another Tim’s in Elliot Lake the previous day. It seems Timmy’s isn’t just the purview of the current prime minister, who has evinced a tendency to hold press conferences in that most Canadian of venues. “The difference is we actually go to meet people,” he quips.

Mr. Mulcair has already toured the private fair grounds where the preparations for the upcoming Manitoulin Countryfest are reaching a fever pitch. “Wow, what dedication to build that,” he said. “That is a lot of infrastructure.”

The NDP leader, like any national figure, arrived on Manitoulin carrying preconceptions of his personality filtered through the national media. In person Mr. Mulcair projects as a warm and genuine individual, engaging and attentive, but more restrained than his predecessor Jack Layton. One hesitates to use the term “more serious” to describe the difference in Mr. Mulcair, for Mr. Layton was certainly just as earnest and serious about the issues of the day during his visit to Manitoulin, but where Mr. Layton practically vibrated with bon homme, enjoying an ice cream cone at Three Cows and a Cone near the Manitoulin swing bridge, his trademark grin shining bright and wide beneath his equally famous mustache, this NDP leader comes across with a solid confidence and gravitas.

The conversation soon turns to matters of national concern that figure large in the Northern Ontario psyche and Mr. Mulcair addresses the issue of missing and murdered aboriginal women. “The government has to call a commission of inquiry into this incredible national tragedy,” he said, adding that it is vital that the families of those who have lost loved ones are provided with some measure of closure in dealing with their grief.

Mr. Mulcair asserted his party’s commitment to finding redress of issues impacting the First Nations and that the relationship must be based on respecting inherent rights and meeting treaty obligations. He pointed out that as long as 250 years ago, the British government recognized the First Nations as nations. The government’s actions must go beyond the words of an apology to real action. “We have got to do a better job,” he said.

Mr. Mulcair noted that the current government enjoys the trappings of being in power. “They just don’t like governing,” he said.

The opposition leader also took aim at the Conservative government’s approach to the foreign worker program and immigration and its potential impact on the North. “This government is using the program to put downward pressure on the wages of Canadian workers,” he said. He used the example of one company’s application to bring in bricklayers for work in Sault Ste. Marie. “There are people in Sault Ste. Marie who can do that work,” he said.

Another national issue with very local implications cited by Mr. Mulcair was the burgeoning infrastructure deficit being felt across the country, as bridges, roads and buildings constructed in the 1950s and 1960s are nearing the end of their lifespans and in desperate need of refurbishment or replacement. The federal government, he noted, has been placing an ever-increasing portion of the burden of dealing with the infrastructure deficit with local municipalities and taxpayers.

In a message he was to reiterate in addressing the Manitoulin Municipal Association later that day, Mr. Mulcair noted that while municipal governments were responsible for 60 percent of the infrastructure in the nation, they only have eight percent of the taxation power. “The federal government has to step up to the plate and help replace that infrastructure built in the 1960s,” he said.

Even though the Conservatives have made building infrastructure a centerpiece of their government’s policy, Mr. Mulcair asserts the reality is that the Conservatives have cut millions from such spending since they came to power. “The last budget saw spending on infrastructure cut by $4.8 billion,” he said, citing the parliamentary budget officer’s report. “They talk a good fame,” he said of the government’s commitment to fiscal responsibility, but asserted that the government is allowing tens of billions of dollars to be taken from the pockets of Canadian taxpayers, citing cable and television rates as well as credit card rates and ATM fees that are unreasonably high in this country. “For the first time in history 80 percent of the people in this country have seen their income drop,” said Mr. Mulcair.

“The NDP is here to talk about sustainable economic development,” he continued, saying that a key component of that development centres on improving transportation in the North. The NDP leader cited the two lane nature of the TransCanada Highway and an antiquated railway system more suited to the 1800s. “Our rail system is an embarrassment for one of the leading countries in the developed world,” he said.

“We have communities that are still reeling from the impact of the late start of the Chi-Cheemaun ferry schedule this season,” said Mr. Mulcair. “We need to ensure that does not happen again next year.”

Mr. Mulcair also cited what he characterized as “an appalling lack of accountability of the current government in the House of Commons.” He also took aim at the current scandals surrounding the unelected officials ensconced in the Canadian Senate, calling it “useless.”

Mr. Mulcair later met with First Nation leaders at the United Chiefs and Councils of Mnidoo Mnissing and municipal leaders of the Manitoulin Municipal Association where he discussed issues ranging from recognition of the nation-to-nation status of federal relations with the First Nations to the need to move forward quickly with the federal responsibility for dredging of the Chi-Cheemaun ferry route.

In a release from Ms. Hughes’ office, the opposition leader’s tour was declared an unqualified success.

“The NDP has deep roots in Northern Ontario and I am very happy to have met with municipal officials and First Nations leaders, as well as local business owners and labour leaders from across the region in order to discuss important issues in their ridings,” said Mr. Mulcair following his tour. “The tour was a great success,” declared Ms. Hughes. “Thanks to meetings like these, the NDP is able to focus on the issues important to Northern Ontario—particularly economic development, job creation and rail safety, as well working with aboriginal peoples on nation-to-nation building.”

Mr. Mulcair was generally well-received while main-streeting across Manitoulin Island, including visits to Bridal Veil Falls and the Billings museum in Kagawong, with a stop by the Manitoulin Chocolate Works. TVO personality Steve Paikin, host of The Agenda, also happened to be in the neighbourhood while Mr. Mulcair was visiting the museum and dropped by for a chat.

“He really seemed to enjoy his tour of the museum,” said museum curator Rick Nelson. “I was surprised by just how attentive and quick he was to notice things.”