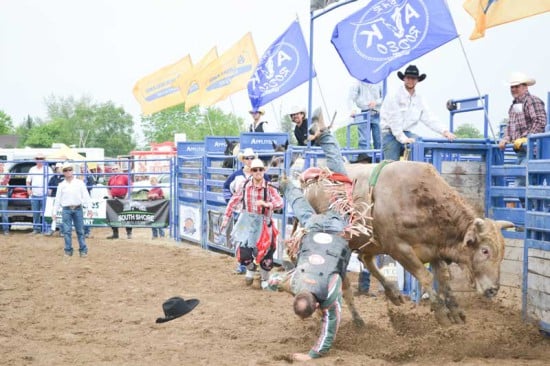 MANITOWANING—Manitowaning was full of cowboys and cowgirls, rodeo clowns, bucking broncos, bulls and thousands of spectators last weekend for the inaugural Manitoulin Rodeo.

“The rodeo went really well,” Manitoulin Rodeo committee chair Kayla Jansen told The Expositor Monday morning. “The stands were full and we lucked out on the weather; it was raining all around Manitoulin, but the sun was shining on Manitowaning.”

Ms. Jansen said that the months of hard work organizing the rodeo really paid off for her when the cowboys quoted the Manitoulin Rodeo “as the best facility in Ontario” at the end of the weekend.

“Some of the cowboys were only participating Saturday or Sunday, but they all came and tracked me down before they left to say goodbye, thank you and compliment us on the organization and facilities of the rodeo,” revealed Ms. Jansen. “They all said that they can’t wait to come back and it meant so much to me to hear that from them. It really made my weekend.”

Preparation for the rodeo included Randy Noble Construction building the ring at the centre of the Manitowaning fairgrounds and creating the new home for the annual event and first class grounds that will be used to host other western events in the future.

A-Bar-K Rodeo, the group that brought the event to Manitoulin, has also been hosted by the Wikwemikong Agricultural Committee in the past, and brought with them years of experience and some of Canada’s top rodeo cowboys and cowgirls.

Many of these cowfolk spend their weeks employed at more traditional jobs, but their weekends are spent travelling across Canada and the United States competing at rodeos.

Two of these weekend rodeo wranglers are Trevor Vanalstine and his partner Stephanie Leyzac, both of Orangeville.

“I work for a utilities company during the week,” Mr. Vanalstine told The Expositor. “These (rodeos) are just a weekend fun thing for me. Stephanie has been barrel racing her whole life, but for me this is just my second year doing the rodeo circuit.”

“It’s a rush,” added Mr. Vanalstine. “I just love it. There is nothing else I’d rather be doing.”

When asked about the hectic lifestyle, travel and risk (Mr. Vanalstine got stuck beneath and dragged by the horse Good Times during the competition) the couple both agreed, “It’s not how we envisioned our future, but we love it.”

The same story echoed through conversations with many of the rodeo’s cowboys throughout the weekend that The Expositor spoke with; it’s a different life, but one none of them would give up.

Daniel Fathers said that he had only been bull riding for the past two years, but revealed that he was one of the oldest riders in the rodeo circuit.

“It’s the fastest game of chance you’ll ever play,” explained Mr. Fathers of bull riding, “and the stakes are your life.”

Mr. Fathers said that he got involved in bull riding after “meeting some of the rodeo guys” at a conference. Next thing he knew, he was signing up for weekend rodeo school and joined the circuit.

“I’m an actor (as seen on CBC’s Heartland where he plays Stewart Forrest) by trade and a horse trainer,” added Mr. Fathers, “but now I can add bull rider to that list and I spend just about every weekend travelling all over to ride.”

“It is the world’s most dangerous sport,” continued Mr. Fathers. “The most common injury is groin pulls, but we get stepped on and kicked, break arms, fingers, and legs, last year I saw a rider get a horn in the hip bone. The minor stuff like broken fingers most guys just ride anyways. At least half the guys would ride through just about anything.”

In the off season Mr. Fathers said he stays in shape stretching a lot and riding bare back, but that everyone has different training techniques.

Tyler Facchini doesn’t appear to be a seasoned vet with his youthful looks, but he was last year’s Canadian Cowboys Association Eastern Division bull riding champion.

“My sister was into horses growing up and then I starting to get into riding when I was 12,” explained Mr. Facchini. “It’s a lot of travelling, but I won’t give it up for anything.”

The riders explained that there is much more to just hopping on a bull “and hoping for the best.”

“It’s a strategic game that happens really fast,” said Mr. Fathers. “These animals are bred for bucking; they are beautiful animals. They are 3,000 pounds and can feel where a fly lands on them and react, so they definitely notice a 200-pound man and are powerful and quick trying to get you off. It’s our job to anticipate what they will do and counteract it.”

Though neither Mr. Fathers, Mr. Facchini nor any of the other bull riders throughout the weekend were able to ‘ride,’ meaning that none of the riders were able to stay atop the bucking bull for the minimum eight seconds, the crowd didn’t seem to mind, enjoying the show all the same.

In the tie-down roping event, Jarod Nooren of Saint Thomas came in first, while Manitoulin’s own Harry Hodge placed fifth.

In the ladies’ barrel racing event Amanda Peidl came in first with a time of 15.55 seconds, while Ross Scully and Brad Heffernan placed first in team roping with a time of 8.9 seconds.

Finally, in the ladies’ breakaway roping event, A-Bar-K Rodeo co-owner Amada Orr of Dundalk showed the crowd how it was done with a first place time of 3.3 seconds, while Billy Jo Peidl of Straffordville came in first in the pole bending event.

Friday night, the Manitoulin Rodeo kicked off with a truck pull with Sean Givens, Wilson Manitowabi and Richard Trudeau, all boasting Dodge trucks, vying to pull the most weight. It was a tough fight, with Mr. Manitowabi finally pulling ahead, with 8,000 pounds and two feet.

Following the truck pull was a horse pull, with seven teams entered into the competition.

The gates reopened Saturday morning with the Honora Bay Vaulting Team showing off their skills, followed by a Manitoulin Horse Club event, showcasing the talents of many of the Island’s younger riders in barrel racing and pole bending.

On Saturday afternoon, Algoma-Manitoulin MPP Michael Mantha and Assiginack Reeve Brad Ham tried their hand at bull riding on the mechanical bull. Though neither stayed on for eight seconds, Reeve Ham was announced the winner, holding on for four seconds.

“I already feel intimidated going into the red,” joked Mr. Mantha of the inflatable red padding surrounding the mechanical bull. “I listen to bull, but I’ve never riden one before.”

“This is a fantastic event,” Reeve Ham commented to The Expositor. “This is hopefully the first of many.”

“This is fabulous,” added Mr. Mantha. “This event really shows Manitoulin’s rich history and what it has to offer.”

Following the A-Bar-K Rodeo, there was a dance at the Manitowaning Arena Saturday night, offering both cowboys, cowgirls and Islanders a chance to mingle and let loose to the sounds of Midnight Blue.

On Sunday, a children’s rodeo was held teaching children how to rope a calf, show off their creative side by building stick horses, race hobby horses, compete in bicycle barrel racing and get dirty with a loonie and toonie dirty pile treasure hunt.

“I’ve been to other rodeos, but this is great!” seven-year-old Avey Perigo of Sudbury told The Expositor as she showed off her cowgirl attire. “I really like the horses and cowgirls.”

Elizabeth Hook and her sister Jessica had travelled from Nipissing to watch the rodeo.

“I love the show,” said 10-year-old Jessica. “I ride bulls and horses,” chimed in her 14-year-old sister Elizabeth.

The stands were full and the praises were high throughout the weekend, showing that the Manitoulin Rodeo is an event that the Island can expect to see back again next year.