AUNDECK OMNI KANING—For the past 15 months a group of dedicated water interns have been studying to become water plant operators and source water technicians under an innovative program delivered by the United Chiefs and Councils of Mnidoo Mnissing (UCCMM) through a partnership with Water First. On Thursday, August 30 those 10 interns graduated from the program in a ceremony that included them each receiving an eagle feather to help guide them in their new careers.

“The Water First Internship addresses drinking and other water issues in Indigenous communities by providing 18 months of paid skills training and certification in water monitoring and treatment to Indigenous youth,” noted Isabella Tatar, consultant, Water First First Nations Water Solutions. “The program leads to certification as a Water Quality Analyst and Operator-in-Training; two of the foundation pieces to becoming certified water plant operators. The internship is currently operating in the seven First Nations on Manitoulin Island.”

The Internship is a collaboration between Water First, the United Chiefs and Councils of Mnidoo Mnising, Wiikwemkoong Unceded Territory and the Union of Ontario Indians (Anishinabek Nation).

The graduation ceremony began with a prayer and smudge conducted by elder Alma Jean Migwans and an honour song performed by High Eagle Singers of Wiikwemkoong before master of ceremonies Chris Pheasant introduced the guest speakers. Ms. Migwans explained how she was at a morning ceremony speaking about the water guardian—the loon—when a loon appeared on the lake. “Water is life,” said Ms. Migwans. “We need to protect the water.” 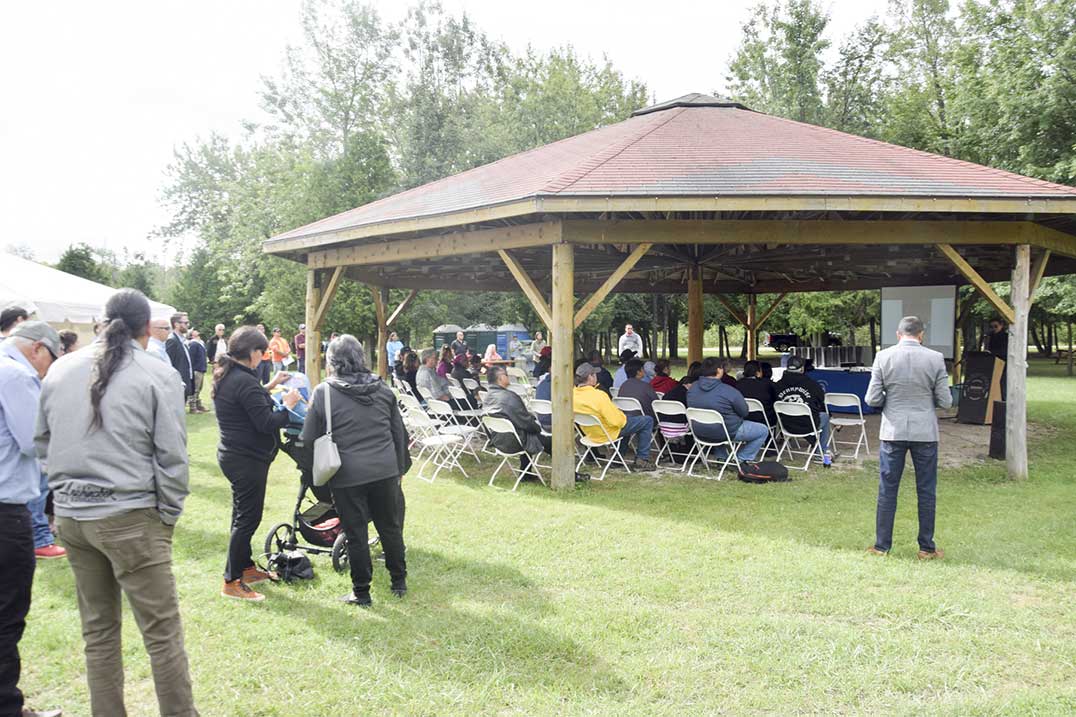 Former UOI Grand Council Chief Patrick Madahbee was the first speaker and relayed how Whitefish River Ogimaa Shining Turtle and M’Chigeeng Ogimaa Linda Debassige have long advocated on the importance of water. “I can’t stress enough the importance of the work you are doing,” he told the interns, who will ensure for their communities “when you turn on a tap in the morning you will get fresh, clean water to drink, you will be able to bathe in clean water.”

Mr. Madahbee congratulated the interns on having “toughed it out, saw it through.”

A video message from Patricia Hajdu, the federal minister of Employment, Workforce Development and Labour was played in which the minister congratulated the interns. Minister Hadju said that it had been an honour to have met the interns M’Chigeeng earlier in the summer.

Sheguiandah First Nation Ogimaa Andrew Aguonie congratulated the interns and delivered thanks to all involved in making the program a success. Art Jocko delivered congratulations on behalf of Ogimaa Shining Turtle and M’Chigeeng councillor Albert Beaudin did the same for Ogimaa Debassige.

UCCMM Executive Director Hazel Recollet also congratulated the students on their dedication and the UOI and Employment and Social Development Canada for funding the program, a sentiment echoed by Water First founder and Executive Director John Miller.

“The leadership and staff at the UCCMM, and at Wiikwemkoong Unceded Territory, thank you for believing in this project and dedicating essential local resources to it over the past two years,” said Mr. Miller. “In particular, Kevin Debassige, Ray Moreau, Bill Assinewe and Daryle Enoose, the program relied heavily on your dedication and skills, which you applied without hesitation, sometimes in the wee hours of the night, to keep the program on track and moving forward.”

Mr. Miller also thanked the UOI, “in particular Polly Bobiwash, with whom many of us regularly consulted and whose wisdom and steady advice was essential.”

“To our funders, both private and government, you know good ideas can remain on the drawing board, accomplishing very little, until somebody steps up and funds them,” said Mr. Miller. “ESDC believed in this partnership and generously funded its implementation. The success of this project has had a lot to do with having adequate resources to work with, and for that, ESDC, we sincerely thank you.”

Mr. Miller also cited the project’s lead instructor, Kendra Driscoll and Jag Saini, the project’s support instructor. “I had a feeling that things were going in the right direction when I witnessed some of the interns hugging both of you during some of our community visits,” he said.

“Last, but not least, I’d like to recognize the contributions of our First Nations Advisory Council,” said Mr. Miller. “On the ground, in such rich and diverse communities, we’d have so many blind spots without your guidance.”

Class valedictorian Eric Vautour gave a shout out to “water, the main reason we are all gathered here today” and congratulated a number of the interns who have already secured employment or are heading off to college for further certification. “May their journey continue along a path of purpose as well as the rest of ours.”

“The pilot project for the Water First internship turned out to be more than a memorable and exquisite experience,” concluded Mr. Vautour.

Each of the interns were presented with eagle feathers by elder Joe Jones, who along with Sue Chiblow (both of Garden River First Nation) comprised the elders’ group supporting the interns through their studies.

The ceremony concluded with an honour song, followed by a feast (appropriately featuring fish) and fellowship.