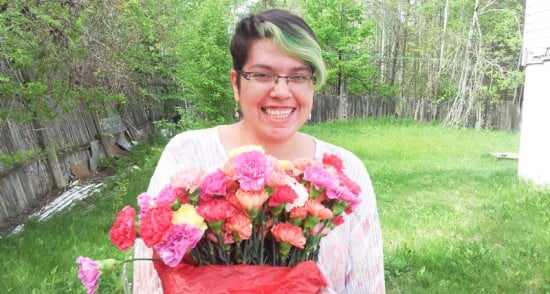 SHEGUIANDAH—Shelba Deer saw her community being torn apart by internal conflict and strife during the events of the past year and it greatly disturbed her. But rather than hunkering down and letting the wound fester, she longed for a way to promote healing and reconciliation in her community. One night a vision came to her in a dream—and planted the seed which was to become the Sheguiandah flower exchange.

“A month ago I had a dream about different flowers that were appearing everywhere in a dark background,” she recalled. “I was wondering why these different flowers were flashing before my eyes and they were very beautiful. I woke up and felt sadness overtake me. I drew a parallel between the flowers and my own community, how we cannot get along, co-exist and acknowledge each other’s uniqueness.”

“This was about saying ‘I’m sorry’ to those I may have hurt by my words, actions, even Facebook posts,”

Ms. Deer kept asking herself what she could do for her community. “How can I express my affection to the people to begin the healing process?” she asked. “I prayed and fasted for four days, and my focus became clearer as did my resolve to do something. This flower initiative is not about what our chief or our council can do for Sheguiandah; this is about what I can do in my own little way. My desire is for people to get along, without any political, family or personal gain. It should not matter what one’s family name is, it is their spirit and what lies within them that I wanted to touch.”

It was the “innocence and beauty within a flower as is within each of us” which came to inspire and inform her actions. “We sadly forget how we once were children, living carefree and playing in the open air. I kept asking myself, what will it take to start the healing and put an end to the hatred and deep rooted divisions within? It dawned upon me that if I started out by showing my love for the people, to start the process myself, that it just might catch on, that others may see the innocence and truth within each of us. I prayed to truly let go of what I have been told about this or that, and to humble myself by showing my affection to each and every one in my community.

The concept of the flower exchange is to show affection and both give and receive a flower to and from someone else.”

“This was about saying ‘I’m sorry’ to those I may have hurt by my words, actions, even Facebook posts,” she said. “It’s about truly being free and letting go, perhaps even taking a chance on new friendships and peace. Sheguiandah, my home, has become much divided, long before this protest. These hatreds and divisions go back 40-plus years, and it has gotten so bad that you can’t even look someone in the eyes or wave or say hello anymore. Everyone hides behind Facebook, and no one has any human contact anymore.”

Ms. Deer tried to set out on her floral journey of peace without any preconceptions or expectations. “I decided on my own accord to take on this flower exchange,” she said. “I did this because I care about the people and my community. To be be honest, I did not expect everyone to go out into the streets and hug, kiss and forgive one another overnight. I am not naïve. I am however hopeful, that if I can even reach one person with this small token, that they in turn can reach someone else and get closure, a hug, a hello, from a place of honesty and true forgiveness.”

In the end, the reaction was almost completely positive. “It went really well,” she said. “A lot of people were smiling, gave me a hug or shook my hand. Some people were surprised and not sure how to react.”

Ms. Deer’s flower exchange plans hit an unanticipated snag on the second day of her effort. “I woke up feeling really sick, I think it might have been a bit of food poisoning,” she said. “But I decided it was important to do this.”

It took about three hours to deliver the 76 flowers, carnations, that she had purchased for the purpose.

She said that there are some people who she fears might not be able to bridge the divide of generations. “Some of this is going back generations,” said Ms. Deer. “It is from our grandparents’ day, three generations ago.” But in those cases there is a word in Ojibwe that covers what to do. “We say ‘maano,’” she said. “It sort of means just ‘let it be’—don’t bother them.”

The divide in the Sheguiandah community has been disturbing for people both within and outside the community, with some taking sides and others having friends and acquaintances on both sides of the divide unwilling to choose.

“It is even worse when it happens within your own family,” said Ms. Deer.

Perhaps the healing can begin, with one proffered flower planting the seed.