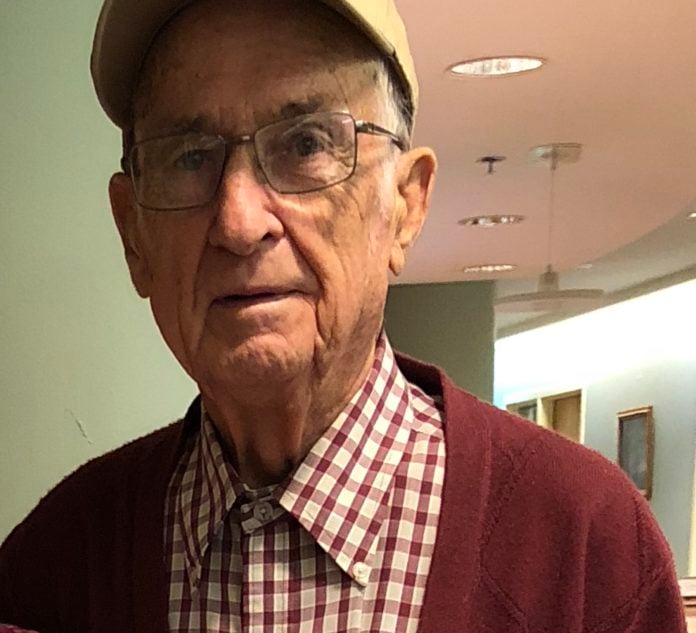 FLOYD AUTREL LOCKYER
“PORKEY”
May 23, 1933 – August 21, 2022
In loving memory of Floyd Autrel Lockyer who passed away on Sunday, August 21, 2022 at the Manitoulin Centennial Manor in his 90th year. Floyd, who was known to most people by his childhood nickname “Porkey”, was born in Little Current on May 23, 1933, the son of the late Clifford and Annie (nee Coughill) Lockyer. Growing up, Porkey was an avid hockey player, a passion that stayed with him throughout his life as he played on and coached many different teams. He was drafted to the farm team of the New York Rangers as a teenager but unfortunately a career in professional hockey was not to be. After graduating high school, Porkey worked briefly for Ontario Hydro before going to work for the Department of Highways (now M.T.O.). Hired to work as a labourer, Porkey worked his way through the organization, retiring as the Area Patrol Supervisor for the District of Manitoulin after more than 36 years of service in 1989. He then went on to elected office, serving as a member of the Little Current Town Council for three terms. He was a proud member of Doric Lodge No. 455 for over 50 years. After retirement, Porkey and his wife Lila purchased a home in Florida where they spent more than 20 years, happily living the Snowbird lifestyle. Porkey is survived by his wife of 66 years, Lila Lockyer, his daughter Tammy George (Ron) of Little Current, his son David (Rebecca) of Brampton and two granddaughters, Shannon Lockyer of Little Current and Makaylah Hopkins of Brampton. He is also survived by his brother Dean (Darlina, predeceased) of Little Current. Predeceased by his sister Audrey (Toots) McDermid (Murray) of Providence Bay, sister Betty Beaudin (Humphrey) of Little Current and Ethel (Sally) LaChapelle (Laurier) also of Little Current. Predeceased by his mother and father-in-law Nellie and Harold Size, brother-in-law Erling Size (Effie), Leland (Bud) Size (Nora), Norman Size and Ted Size (Jean). Survived by brother-in-law Harley Size (Irene) of Little Current and sister-in-law Moyra Size of Manitowaning. He will also be missed by many nieces and nephews. At Porkey’s request, cremation has taken place and there will be no funeral service
“He never looked for praise, he was never one to boast, he just went on quietly working, for the ones he loved the most. His dreams were seldom spoken, his words were very few, and most of the time his worries, went unspoken too. He was there … a firm foundation through all our storms of life, a sturdy hand to hold on to, in times of stress and strife. A true friend we could turn to when times were good or bad, one of our greatest blessings, the man that we called Dad”.
Dad … we will love you forever and miss you always.
Donations in Porkey’s memory can be made to the Manitoulin Centennial Manor Auxillary, the Heart & Stroke Foundation or the charity of your choice.