KAGAWONG—One might be forgiven for thinking that retired nurse and cancer survivor Mary Buie would greet bad news with a smile and cheery quip, and one might not be far off on that thought, but the results from her latest CT scan brought decidedly awesome news.

Ms. Buie is taking part in clinical trials of an experimental drug, AMG650, through Princess Margaret Hospital in Toronto after traditional chemotherapy and immunotherapy treatment failed to halt the progress of an aggressive cancer in her lungs and liver. As part of those trials, Ms. Buie recently had a CT scan performed.

“There has been a 46 percent shrinkage in the tumours,” she announced. “That includes the new one in the lung that appeared last year.”

It is important in these most trying of times to share good news widely, said Ms. Buie. “We can all use the lift with all the terrible things we see on the news every day.”

Ms. Buie said she is “absolutely thrilled” to be taking part in the trials, as much for the sake of others as for herself. “It is research like the kind in these trials that will help others get through their cancers in the future,” she said.

Ms. Buie is a woman with a strong religious faith and it is that faith, and the support of her faith community and prayer, which she credits for her continued buoyancy along with the scientific research.

“I think God is in there too for that amount of shrinkage,” she said. “God and all the prayers that have been said on my behalf. We know that God does not cause cancer to happen, but the power of prayer can be amazing.”

But the good news has come with an asterisk.

“My enzyme levels are elevated,” she said. “If I can’t get them down, then I will have to stop the treatment. My liver is producing too many enzymes.”

Ms. Buie said she is hopeful that a few lifestyle changes may assist in bringing those levels down. “I think part of it is my own fault,” she said ruefully. “I did celebrate with some wine and I did a six-kilometre walk. Both those things will bring your enzyme levels up.”

As a dedicated fundraising volunteer for cancer research, Ms. Buie was invited to take part in a virtual tour of a research lab.

“I raised over $1,000 for breast cancer research through Run for the Cure that I take part in yearly,” she said. “I have triple negative breast cancer—a more challenging one to treat—and the good news is that 80 percent of those of us who have it will now survive more than five years. All because of research!”

“There is a push for using viruses for treating cancer,” noted Ms. Buie, “they are curing some diseases like melanomas through those efforts.”

“The researcher we heard from is Dr. Tommy Alain and he operates out of the Children’s Hospital in Ottawa (Children’s Hospital of Eastern Ontario),” continued Ms. Buie. “He is close to many research labs so they can share ideas. They are able to grow cancer cells from patients in dishes and study their behaviour; trying to discover their different mechanisms. The researchers are making new discoveries for different diseases as well as cancer—especially for children. Cancer research is very much looking at the cellular and molecular biology of a person’s cancer. The advance in research is that it is much more precision medicine, providing preventative therapies, early diagnosis, targeted inhibitors and immunotherapies.”

The mechanics of this research takes place on the laboratory bench. “Researchers are working on the proteins in the cell to attract the immune system to target the cancer cells,” she said. “That is what my research drug, AMG650, is doing for me.”

Ms. Buie is no stranger to the staff and procedures at Princess Margaret Hospital. Not only is she a cancer survivor herself, as a nurse in the 1980s she often accompanied patients being transferred by air ambulance to the facility. “We would land on the helipad on top of the hospital and the paramedics would go in,” she said. “I have always been impressed with the dedication of the medical teams there. Princess Margaret Hospital is one of the top five cancer research institutes in the world.”

These days, she is just one of two patients at Princess Margaret Hospital taking part in the trials out of 40 in the world. “I am so very fortunate,” she said.

In the meantime, Ms. Buie is enjoying every moment of her life. “I have been blessed with the opportunity to visit with my grandchildren when I go down for my treatments in Toronto,” she said. “My family has rallied around me and we have laughed and celebrated together.”

Ms. Buie cites a small Indian and Thai restaurant she found close to the hospital. “Matagali is on Elm Street, right near the hospital,” she said. “It is just a tiny little hole in the wall and there is usually nobody else there, but they make a special supper just for me.”

Ms. Buie is now looking forward to a trip to Hawaii she will be taking in April with her daughter Jenn. “In April I go down to Princess Margaret Hospital and the next day we are leaving for Hawaii,” she said. “I could not have done any of this without the help of so many people.”

When it comes to cancer research, Ms. Buie encourages everyone to contribute to fundraising. “We can all do our part to beat cancer,” she said. “I was just listening to Terry O’Reilly’s ‘Under the Influence’ on CBC the other day. He was talking about how the hospitals are campaigning by not using children as victims, but as superheroes.”

EDITOR’S NOTE: Word is just in, there is more good news to share. Ms. Buie’s liver enzymes have dropped and she will be able to continue in the experimental trials. 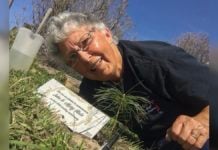