MAPLE RIDGE, BC – A veteran musician, a former Manitoulin Island resident, had one of his songs played on a Hockey Night in Canada telecast recently.

“I have always followed hockey and the Toronto Maple Leafs passionately, so to get one of my songs on Hockey Night in Canada is a big achievement for me,” stated Marty Zylstra, of Maple Ridge, British Columbia. “I got a text from my dad afterwards stating, ‘my son is in the NHL (National Hockey League)’ which was so cool; so true and cool.”

Mr. Zylstra is a veteran musician, and former long-time Manitoulin Island resident who, in late January, had a song he wrote and played, ‘Rattle the Glass,’ selected and used on Hockey Night in Canada telecast.

The song has been described as a “head-bobbing, foot-stomping four-minutes and 15 seconds of fuzzed out guitar, driving drums and pulsing bass, and seemed almost tailor-made for a hockey broadcast.” The song is on Mr. Zylstra’s album Boom Chicka.

It only took Mr. Zylstra a couple of minutes to write the tune. “When I wrote the demo, I thought it had an AC/DC vibe to it, so I offered it to other bands in the area, but they said ‘that’s your song and you should use it’.”

“And when I went to JP (Maurice), who produced the record, I said this song would not fit the album as my previous album had been a folksy, rock album,” said Mr. Zylstra. “Anyway, I played the song for JP and I told him if we produce this song it has to be super understated. Naturally it got the band in the studio and played it like a rock song.”

Mr. Zylstra and his family are probably recognized by many people on Manitoulin Island. His parents are Bill and Laurie. His mom passed away in 2018. “My dad still has a cottage on the island, he summers there and the rest of the year he lives on Vancouver Island.”

“Manitoulin is a great place to be as a kid,” he stated. He pointed out his father was a preacher and the family moved around a lot.

“After moving to BC I never left, it was here that I met my wife and she along with our kids live in Maple Ridge, a suburb of Vancouver,” continued Mr. Zylstra. “Yes, I’m hoping we will be able to visit the Island again in the future.”
“I did start playing music while I was living on the Island. I played piano and took lessons from a teacher from Mindemoya who used to drive to Little Current Public School to teach us,” continued Marty. “I got an electric guitar one Christmas, and it took me a month to learn how to play it.”

“I started to write my own songs from the start,” said Mr. Zylstra. “And, my first performance was at MSS—our band played a Nirvana song, and one of my own songs.”

He has played drums with a band, and was a member of a Beatles tribute band. He has played at the Canadian Football League Grey Cup, been featured on Much Music and several different musical television shows.

The song ‘Rattle the Glass,’ “was heavily inspired by hockey on that song,” said Mr. Zylstra. “I have always followed hockey passionately, and have always been a Toronto Maple Leafs fan.”

“I’m really happy with the new song, and the band is fantastic on it,” added Mr. Zylstra. To preview and stream ‘Rattle the Glass,’ visit distrokid.com/hyperfollow/martyzylstra/rattle-the-glass. 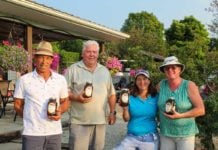 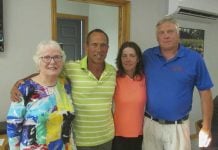