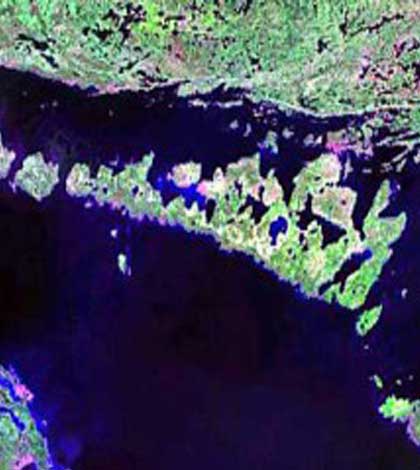 The sudden aggression displayed last week in New Brunswick during a protest against fracking (the polite term is shale gas extraction) in that province must give Ontario’s legislators a notion of just how volatile a topic this particular mining practice can be.

There is no fracking yet underway in Ontario but supplies of natural gas reside in the rock of Southwestern Ontario and we know that nature has laid up stores of it in the limestone substrate of Manitoulin Island.

The practice of fracking, the slang term used to describe the practice of hydraulic fracturing underground rock to release the natural gas laid up there, uses water treated with chemicals to break apart rock formations.

Oil and gas have long been coaxed from fissures, gaps, and cracks in rocks; fracking is simply a way to artificially induce more cracks (some of them more than half a mile long) by filling a bore hole with water, pressurizing it to as much as 8,000 pounds per square inch to split the rock, and forcing coarse material like sand and ceramic in to keep the new clefts open, thereby allowing them to produce for decades.

The process is analogous, in the world of energy extraction, to the mining of Alberta’s tar sands (the polite term is now oil sands) for the sourcing of natural gas and crude oil by means of fracking and oil extraction from oil sand, respectively, for this is what the world is doing to keep these products flowing as the easier-to-extract sources draw ever nearer to depletion.

One member of the Ontario legislature recently called for a government policy for this province on an industrial extraction process that many feel is more destructive than anything else in that it uses large amounts of fresh water, contaminating it in the process.

Ontario does indeed need a policy on fracking. Manitoulin Island residents should consider the possibility, however remote, that industrialists from our country and beyond may want to explore the possibility of removing natural gas here by means of this controversial method.

The level of emotion displayed by some of the New Brunswick residents protesting the fracking process, feelings that made a handful of them angry enough to fight with police and set a number of police vehicles ablaze, is indicative of how strongly many people feel about this particular method of natural gas extraction and its impact on people’s local environment.

Manitoulin people take pride, joy even, on living on the largest island in freshwater in the world; an island that itself boasts more than 100 of its own lakes, some of them monumentally large and all of them spring-fed.

We must assume that oil and natural gas prospectors are considering fracking to access stored energy sources. Before this happens this province should, as an Ontario legislator recently suggested, develop a policy on what would be allowed in this particular process of resource extraction and, most importantly for Manitoulin Island, where exploration and possible extraction would be tolerated.

On the societal level, we have recently observed the level of community division the wind turbine project has created.

Should exploration for natural gas and its removal by possible fracking be considered for Manitoulin, there is every likelihood to anticipate that the response would be nearly-universally negative and opposed by virtually all of the population of Manitoulin Island.

There is no reason to think that, in this province, the extraction of natural gas by means of fracking would be a government priority in the same way that the development of wind turbine farms and solar installations have been to the extent that Ontario encouraged their development with offers of high prices paid for the power they produce through feed in tariffs and the enactment of green energy policies that allowed these alternative energy projects to be somewhat fast tracked. If anything, given the public investment pledged to green energy sources and the promise by Ontario to shut down coal-fired generating plants, such a non-green initiative as fracking would, logically, be opposed by the government

But if there is money to be made by finding new sources of an in-demand energy source, that is non-renewable and where conventional sources will one day be depleted, then there will be pressure on government to grant permission for exploration and extraction, possibly by means of fracking.

But not, let us hope and agitate against, on Manitoulin Island.