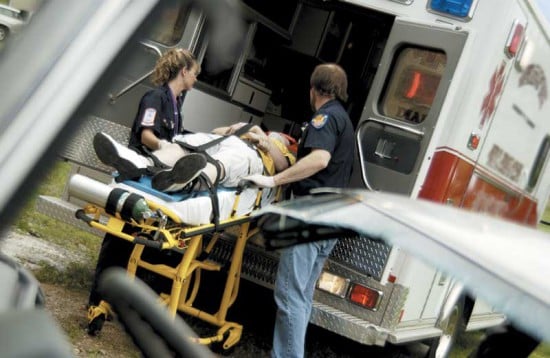 “This partnership has been approved for a pilot project through the NELHINs, looking at the non-urgent transfer of patient system,” Mr. Dominelli told the Recorder last week.

In a letter to Ray Hunt, chief executive officer (CEO) of the Espanola hospital, dated December 20, 2012, Louise Paquette, NELHIN CEO wrote, “the (NELHIN) is pleased to advise you that Espanola Regional Hospital and Health Centre will receive $184,078 in one-time funding for 2012-2013 to support the delivery/purchase of non-urgent inter-facility patient transportation pilot project per the expression of interest submitted to the NELHIN on October 30, 2012 for a six month period.”

Derek Graham, chief executive officer of the Manitoulin Health Centre (MHC), told the Recorder, “this is certainly good news. We’re just finalizing the logistics, within a three way partnership, in this demonstration project. The premise of what we are doing is to use recently decommissioned and suitably prepared ambulances as transport vehicles that would be designated for non-urgent transfers (of patients), and will be outfitted at that level.”

Basically, it would be augmenting the services that are already provided under emergency medical services (EMS), but designed for non-urgent transfers, the Recorder was told. In the LaCloche-Manitoulin proposal submitted to NELHINs, it states “the issue of non-urgent patient transfers has been ongoing for many years and remains unsolved in Northern Ontario. As pressures mount on EMS to respond to an increasing number of emergency calls, the ability of EMS (administered by the DSB) to continue with its historical inter-hospital transportation is decreased.

An executive summary of the proposal that had been submitted to NELHINs from the partnership states, “this expression of interest (EOI) is based on the original Manitoulin-Sudbury DSB non-urgent patient business case (submitted to the Ministry of Health and Long-Term Care on October 25, 2011), which had formal written support from several hospitals in the Sudbury-Manitoulin Hub including the NELHIN.”

“This proposal focuses on expanding capacity in a cooperative, collaborative and integrated manner and is predicated on the following components: 1, three recently decommissioned and suitably prepared ambulances will be used as transport vehicles, two will operate at any one time (the third will be held in reserve) with one car stationed in Mindemoya and the second vehicle in Espanola; 2, part-time patient transfer attendants will be hired and trained by Manitoulin-Sudbury DSB to provide 80 hours a week of non-urgent transport of patients between the region’s hospital sites; 3, appropriate and standardized triage of patient transport needs will be accomplished by the hospitals; 4, Manitoulin-Sudbury DSB will collect all required statistical reports to measure the degree of success of the demonstration project over the six-month period; 5, dispatch services will remain with the Central Ambulance Communication Centre (CACC) and; 6, funding will transfer from the NELHIN to one of the participating hospitals, who shall act as the administrative lead/paymaster for the six-month demonstration pilot project.”

“As the new service would be established through existing non-profit organizations, it can be operated at a lower cost than that of a private sector that is profit motivated,” the proposal explains. “Additionally, by building on existing infrastructure, services and processes, we are not reinventing the wheel. As each organization already meets rigid quality standards (e.g. infection control) there will be synergistic benefits of aligning these standards across each sector. This too will further support the work being undertaken to implement the Excellent Care for All Act. Ultimately, all organizations would achieve improved response times/reduced wait times by working together to better coordinate drop-offs and pick-ups to achieve better scheduling thus avoiding duplication of service and related multi-trips to and from Sudbury.”

“The three main stakeholders that this issue affects are EMS, the hospitals and the patients. For EMS, the reality of EMS in the province of Ontario is that there is a disproportionate increase in call volumes in comparison to an ability to provide the service. Call volumes are on the increase, rising at an astronomical pace. For instance, call volumes have risen nearly 50 percent in the past six years within the Manitoulin-Sudbury DSB to a total of over 13,000 calls for service in 2011. It is not necessarily the calls categorized as non-urgent transfers that are rising but with an older, sicker population there is an increase in calls for medical emergencies. While ambulances are performing relatively the same number of non-urgent transfers, the ability to respond to the increasing number of true medical emergencies is compromised. And the role of EMS with respect to non-urgent transfers is somewhat unclear and a significant number of patients being transferred by Manitoulin-Sudbury DSB EMS from one facility to another do not fall within the provincial criteria. When EMS is performing a non-urgent patient transfer it often occurs from one of three local hospitals facilities situated in Espanola, Little Current, and Mindemoya to Health Sciences North in Sudbury.” A table shows the time breakdown as to how long current resources are out when performing a non-urgent patient transfer to Sudbury which showed from Espanola, four hours and 23 minutes, Little Current, 5:45, and Mindemoya, 7:01.

“This is a six-month pilot demonstration project,” said Mr. Dominelli, “which will allow us to try out augmented system. Ideally we would like the NELHIN to fund this on a permanent basis, but at least with this project funding they are looking at the issue.”

Mr. Graham pointed out, “in the end this project will look at augmenting the current system will do and how it affects EMS in responding. We are trying to prove the worth of additional level of service, and whether this could be implemented on a long term basis.”