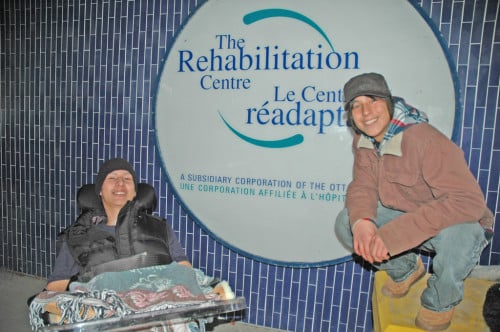 EDITOR’S NOTE—Since his May car accident, The Expositor has been following the recovery process of Aundeck Omni Kaning’s Gabe Abotossaway. The young man has overcome many obstacles since his diagnosis as a C4-5 quadriplegic (meaning he can move his head and shrug his shoulders, but could not move any of his limbs). He turned 20 in the intensive care unit of Health Sciences North in Sudbury and became the recipient of Ontario’s first diaphragmatic pacing system—a pacemaker that sends impulses to the diaphragm to help it inflate and deflate, meaning Gabe can breathe on his own, without the help of a ventilator. Now Gabe is taking the next step to recovery: rehabilitation at the Ottawa Hospital Rehabilitation Centre, with his mother, Beverly Abotossaway, by his side. The following update is written by Ms. Abotossaway. 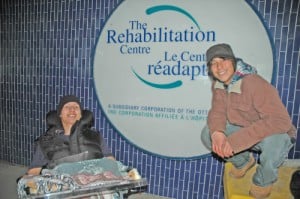 OTTAWA—Since The Expositor’s last article in September, so much progress has occurred. Gabe, at around the four-month mark after his accident, got movement in his left arm whereby he can move side to side. We also had some setbacks with infections and ongoing pain for Gabe. We are also now at the Ottawa Rehabilitation Centre and have been since November 21.

What many people probably don’t realize is that although Gabe has been classified as a C4/C5 quadraplegic, it doesn’t necessarily mean that he can’t feel anything and, unfortunately for Gabe, what we never shared before is that Gabe suffered extreme pain (neuropathatic) in all areas of his body, especially in his neck and shoulders. A lot of times my son was in excruciating pain, bringing him to tears and making me feel so helpless and unable to do anything for him. It was so unbearable for me to see him suffering and we don’t wish this on anyone.

This was a major hurdle as his health care team in Sudbury didn’t want to make the stronger narcotics (dilaudid, oxycotin, ketamine, morphine, etc), a necessity for him, leading to dependency. Earlier on in his hospital stay, Gabe was on these various medications and the decision was made to end them for his overall well-being later on. Gabe was also in agreement with this as they never really worked for him and he said it was the worst type of feeling being weaned off the narcotics and he told us he felt like he was going to die. It took at least two weeks for the cold turkey withdrawal.

Gabe does have other type of neuropathic meds to help with pain management and spasms and they are working well for him, but he still suffers 24/7 pain that he works through and tolerates with more natural types of treatments that he uses to relieve the pain symptoms. Chronic pain management will probably always be something that Gabe will deal with, but alternate treatments such as acupuncture have helped and I use the TENS machine (electronic acupuncture) on him and it has helped.

Finding a rehab centre that could take Gabe was also another hurdle. Lyndhurst in Toronto could not accept Gabe due to his unique diaphragmatic pacer and the need for respiratory therapists and more specialized care. This was quite surprising to us as usually spinal cord injured patients have respiratory issues and I think accommodating them should be a norm at rehab centres. Hamilton had a long waiting period so they couldn’t take him and he was out of their catchments areas as well. London approved him and Kingston was in the works too. Our preference was London as we have family in the area, but we agreed to take the first bed available as Gabe had been ready to begin rehab for some time. Ottawa approved his application right away so we waited less than two months for bed availability.

Gabe is so thankful to be in Ottawa and really likes the rehab centre staff and the specialized care he is getting here. Gabe has always had a private room but now shares a room with four other patients. This is good for him and he doesn’t mind the roommates as he is making new friends with people in similar circumstances. We are learning so much here, especially with techniques in respiratory care and we are comforted knowing we will have backup plans in case of pacer failure.

Gabe will learn how to use specialized equipment to control his own environment and be more independent. His electronic tilt custom wheelchair is being ordered and he will operate it by head movements. Gabe chose this type rather than a “sip and puff” chair (operated by blowing through a straw) and he is looking forward to learning how to operate his chair. Gabe’s daily routine at the rehab centre involves getting into his manual chair and attending appointments throughout the centre with occupational therapy, physiotherapy, respiratory therapy, neuropsych therapy and a psychologist, to name a few. While in Sudbury, due to extreme neck and shoulder pain, Gabe could only tolerate less than two hours in his chair, but I am happy to report he can now tolerate four to six hours and is able to attend his appointments rather than having workers come to his room.

Prior to the May 21 accident, Gabe weighed 160 lbs, but dropped to an all-time low of only 109 lbs while in Sudbury. Thankfully, Gabe was able to eat regular food once his feeding tube and trach tube were removed and he is steadily gaining weight. Prior to his accident, Gabe was a vegetarian but agreed to have regular meat diet to get more protein and weight gain and is looking so much better. As for myself, due to feelings of guilt and my son not being able to eat but moreso with all the stress that came with overcoming Gabe’s miraculous hurdles, I lost over 30 lbs (which is great because I was definitely over my body mass index). I, of course, do not recommend a “stress” type of diet but the much-needed weight loss is definitely better for my overall health so I can continue to care for my son. I am going to continue to lose more weight in a more healthy way to be in my appropriate BMI so I have the continued strength and energy to care for him once we do come home to Manitoulin.

With all of the physical rehabiliation Gabe is getting, from day one and my husband Max and I were more concerned about Gabe’s mental and spiritual health. I was praised at the Sudbury Regional Hospital for getting Gabe pyschology services (first time ever in the ICU setting, apparently) but Max and I wanted more for Gabe and enlisted the help of family and friends for more spiritual care through western and traditional methods. We never turned down help from all walks of life, religions or spiritual beliefs because Gabe believed we all may take different paths in spiritual enlightenment, but they all lead to the same thing which is God/the Creator. Gabe had traditional Native advisors from Wikwemikong, Whitefish River and from as far away as the northern James Bay area, including special ceremonies, and we believe this has been a contributing factor to his continued recovery. Before leaving Sudbury, Gabe also received his Anishinaabe name and two eagle feathers and it was so emotionally moving and an honour for Gabe.

Planning for his future is something we can now do and Gabe is working dilegently with his lawyers, rehab staff, and even Member of Parliament Carol Hughes. The focus is on coverage for his diaphragmatic pacer, if not for himself than for future patients and it is such a relief because when he was in an ICU setting we lived by planning only in terms of seconds, minutes and days. Gabe hopes to eventually complete his post secondary education, perhaps in Native Studies, teaching or political science and his future is awaiting him now. Gabe was kept here for a reason and he has many great things to fulfill in his life.

We will be having our family meeting in January, but it is anticipated that Gabe will be in rehab for at least six months here in Ottawa. Much planning is needed to come home as Gabe will need appropriate housing, equipment and services. Although Sudbury has the training for his diaphragmatic pacer, the health care providers on Manitoulin will have to learn as well so Gabe can come home. The Canandian Parapeligic Association in collaboration with Gabe’s legal counsel and rehab centre are assisting us to see that services are provided to Gabe. I will be contacting the health care service providers in the area to see that everything is in place for Gabe so the health centres can expect some communication over the winter and spring to prepare for Gabe’s needs. Health care workers will be exposed to the first ever diaphragmatic pacer patient in Ontario so there will be some education involved but more so to provide appropriate care and services to a spinal cord injured patient.

Gabe represents the power of the human spirit to deal with adversity in a positive way and he is certainly a shining example. Gabe is a living miracle and we believe he will regain more mobility to be self-sufficient and independent and will never settle because miracles have happened for Gabe since day one of his accident. I am not saying that Gabe will walk again or have the ability to use both arms, but I am not dismissing it either since there have been advancements with spinal cord injury patients. Researching medical journal articles and reading them to Gabe is giving us hope because we are living in the era where those with spinal cord injuries will move again.

Events happen in our lives and the miracle is that we adapt and cope and even rise above them! The events, good and bad, make us the people we are.