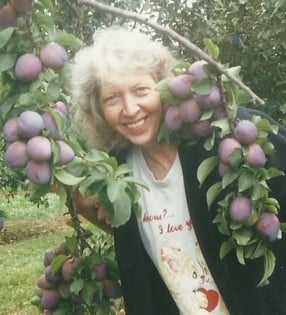 Geraldine Thomas passed away peacefully in her sleep on September 20th, 2017 in Mount Brydges, Ontario, at the age of 71. She will be deeply missed and cherished by her daughters Tracie Thomas, Jennifer (Rodney) Davis, and Rebecca Thomas. She was the proud grandmother of Emily Hayden (Matt), Joshua Davis (Tai), Rachel Corsaut (Scott), Isabelle Dube, Lily Dube. She is survived by her brother Martin (Molly) Ainslie and her sister-in-law Carolyn Ainslie as well as many nieces, nephews, and cousins. She is previously deceased by her parents Dustin Leone Ainslie, and Anne Ainslie (Stone), as well as her brother Ronald Ainslie. Gerry was the first baby girl born in the hospital in Little Current on May 1st, 1946. Gerry liked to be outside in the garden with her beautiful flowers. She was a country music lover, and particularly loved Hank Williams. Her favourite place to be was at home in Elizabeth Bay where she grew up, surrounded by water and nature. At the age of 16, Gerry moved to Toronto where she worked at Kresge’s and was amazed by all of the bright city lights. She enjoyed travelling and visiting historical landmarks, especially with her daughter, Tracie and going out to Alberta to visit her daughter Jenny. Some of their more recent trips include Washington DC and Mackinac Island. Gerry loved to visit markets and small shops, admiring all the fresh vegetables and flowers and various trinkets they have to offer. She admired the changing of seasons, particularly watching the leaves change and preparing for Christmas with lights and decorations of all kinds. She shared many of her hobbies with her grandchildren such as playing cards, coin collecting, and educating them on historical events. She spent her final adventure at the Niagara Falls Zoo with Tracie. There was a memorial service at the Elizabeth Bay United Church on Sunday September 24, 2017 at 3 pm. Memorial donations may be made to the charity of choice as expressions of sympathy and may be made through www.simpsonfuneralhome.ca.