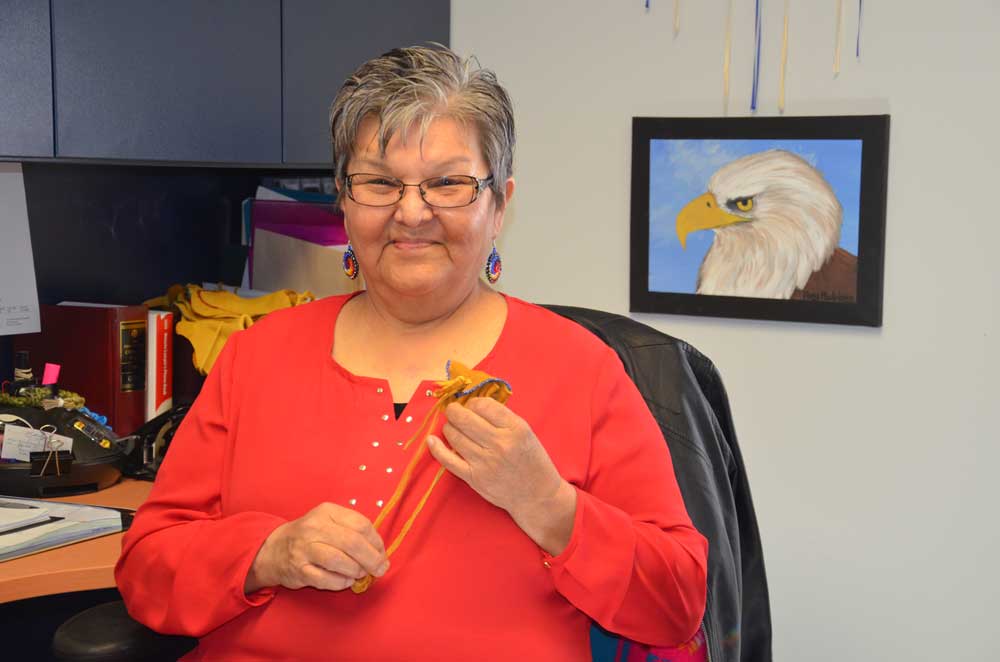 M’CHIGEENG—The Expositor sat down with Gladue report writer Marilyn Debassige recently to go through the concept behind the reports and the process involved in creating them.

“The significant overrepresentation of aboriginal people in the criminal justice system has been deemed a crisis by the Supreme Court of Canada,” noted United Chiefs and Councils of M’nidoo Mnising   Justice Program Manager Paula Corbiere in how the UCCMM sees the importance of the project here on Manitoulin. “Our goal in securing the Gladue Program was to increase culturally sensitive sentencing in the judicial district of Manitoulin through the implementation of Gladue principles and methodology.”

A Gladue report is a type of pre-sentencing and bail hearing report that the court can request when considering the sentencing an offender of aboriginal background under Section 718.2(e) of the Criminal Code. The Gladue reference comes from Regina versus Gladue, a 1999 Supreme Court of Canada decision. The Gladue case was the first to challenge section 718.2(e) of the Criminal Code.

“Knowing about the particular circumstances of an aboriginal offender opens the door for the court to pass a sentence that is appropriate and responds to the needs of the offender,” said Ms. Corbiere. “For example, the Gladue caseworker may link specific issues facing the aboriginal offender to systemic issues facing aboriginal people as a whole. Options to address these issues are identified and presented in the recommendations section of the Gladue report thereby attempting to meet the needs of that individual.”

“Knowing about the particular circumstances of an aboriginal offender opens the door for the court to pass a sentence that is appropriate and responds to the needs of the offender,” said Ms. Corbiere.

In securing the program on Manitoulin, with its large Anishinaabe population, was vital to ensuring access to that process. “Although every aboriginal person in the criminal court system is supposed to have access to a Gladue report, not everyone does,” said Ms. Corbiere. “We believe it is important for the Gladue program to be offered on Manitoulin Island because this service will assist our First Nation members in addressing the root causes of their offending behaviour, thereby decreasing the number of aboriginal people in the criminal court system.  Ultimately, we want our people to live healthy lives and by identifying and addressing the root causes of their behaviour, we will be able to accomplish that.”

There is a critical misconception about the Gladue report system that Ms. Debassige said she wanted to address clearly at the outset. “The Gladue report is not meant to secure a reduced sentence,” she said. “The purpose is to provide the court with a real understanding of what the individual has been through in their lives. It is meant to provide an insight into where that individual has been.”

Although the queries used in creating the report often start out with questions that are very general in nature, she explains, the process often digs deep into very personal and often traumatic issues that are quite often very linked to that individual.

The process usually begins with an individual who is facing sentencing coming to the UCCMM offices in M’Chigeeng for an interview. There is a referral made, either from the court, either the judge, the Crown or the defence requests the report so that it can be a part of the judge’s deliberations on an appropriate sentence.

Sometimes, depending on the circumstances of the individual, the caseworker may go to the individual to conduct the interview. “It often depends on the economic situation, whether they have difficulties in transportation, for instance, I may go out,” said Ms. Debassige.

The interview often is conducted just with the individual who the report is about, but it can also include family members. “Sometimes that is helpful, sometimes not,” she said.

The aspects of the individual that make up parts of the report can go into historical implications that extend from the family as well. “You wouldn’t think, perhaps, that the residential school system would have affected the younger generations, but that is often not the case,” said Ms. Debassige. The familial environment that the individual grew up in, or the lack thereof, can often be traced to the ramifications and impacts of that experience by senior family members and the loss of cultural grounding that the individual should have had access to growing up.

The caseworker collects basic demographic information from the individual, their First Nation, their geographic background, their parents and sibling relationships and grandparents.

“We go into their personal relationships,” she continued. “Whether they have partners, are they married, do they have children?”

As the process continues, the caseworker will begin to go into the specifics of any types of trauma the individual may have experienced or been witness to in their lives, anything that may have impacted them. “Have they experienced loss and what services they may have accessed,” said Ms. Debassige.

The report writer records any learning disabilities and whether the individual has been assessed for those issues. “Has there been a diagnosis,” she said. “The individual’s lifestyle is explored, including their first experiences with drugs and alcohol and what that looked like.” Included in that would be their experiences with the criminal justice system, but also what they would want to do if they had the opportunity to address the victims of the actions that led to the individual being before the courts.

“Have they accepted responsibility for their actions? What are their thoughts and feelings,” she said. Among that process, the individual may be asked what corrective measures they would be willing to undertake themselves,” she said. “For instance, if they did cause harm to an uncle or other relative, how do they feel about that.”

“They can come up with their own ideas,” she said. “Often they will tell me that ‘although I can’t talk to them, I would like to apologize.’ They feel bad and they regret their actions.”

Although individuals usually recognize that alcohol or drugs do not provide an excuse for their actions, the individuals often come to realize the role that substance abuse has played in their decision-making processes.

The report will go into what stresses the individual was under prior to when they committed the offense for which they have been found guilty. “What was happening in their lives,” she said. “Their addictions may have been so strong that they were taking over their lives. The offences may have taken place to feed their addictions, theft or violence.”

In her own philosophy, Ms. Debassige said that she does not believe anyone wakes up in the morning and says “this is what I am going to do, you don’t wake up and plan to be an addict.”

The caseworker will explore whether the individual has been previously incarcerated. “Have they been in jail for a period of time and how recently,” she said. In addition to the challenges of adapting to the cultural norms that an individual faces within the prison system, the process of re-acculturating to the very different norms in general society can also play a role. “It is a different world,” she said. “It has different codes of conduct that people adopt in order to survive in that environment.”

The individual’s experiences of Native cultural teachings are explored. “Have they participated in cultural activities, where are they situated in terms of our cultural identity. Have they embraced the teachings,” said Ms. Debassige. “Do they have a Native name? Do they know their colours? What that looks like with them?”

That exploration allows the caseworker a window into where the individual sits in relation to the community, she said. “What their sense of community is, what their level of community involvement might be.”

Ms. Debassige said that part of the process has expanded greatly since she came onboard.

The process is often a painful experience for the individual undergoing the report assessment. “The disclosures are often painful. Rarely do I do a report where the family has been in a healthy environment. I would say maybe two percent.”

Those disclosures may involve sexual abuse and violence from family members and that brings in an added complication when communicating with family members. Often, the abuse has never been disclosed to family members. “If the perpetrator is deceased, for example, I don’t disclose the identity.” There are a number of accepted strategies, including using initials in place of names. “But even there you have to be careful because the family can deduce,” she said.

That process takes its toll on the caseworker as well, who must maintain a strict confidentiality, even though the report will be entered into the court. “I sit down with my supervisor for debriefing,” she said. “Very early on I came to realize that people have bared themselves to me. They have shared their pain with me and that is a privilege.”

Ms. Debassige creates small medicine bags that she often gifts to the people that she is interviewing for the report. “I don’t adorn them a lot, just some simple beadwork, or place anything in them,” she said. But the act of sharing their stories with her calls out for some kind of mutual exchange, she said. Ms. Debassige also conducts simple ceremonies if it will help the individual in the process. “I have a drum and we can partake in a smudge,” she said. “We have been ‘indigenizing’ the program since it began.” It has been very helpful that Ms. Debassige is comfortable with Anishnaabemowin, bridging the language divide, particularly with older people being interviewed.

Despite the heavy emotional toll the interviews take, the interactions have been almost completely benign, with almost no suggestion of violence. “I would say it has only been an issue in one out of the 110 interviews I have had,” she said.

Demand for the reports has been heavy, with as many as 70 interviews taking place last year. The process takes about two hours to complete on average, but some can take as little as one hour.

The caseworker’s work is complete with the report. “I don’t go to court with them,” she said.

Ms. Debassige said that the program has been very successful. “The need is definitely there,” she said.

In addition to Gladue reports, the Justice Program has also begun to work on bail release plans for individuals who are incarcerated. “We help them to put the plan together,” said Ms. Debassige, adding that bail sureties will remain the responsibility of the individual.