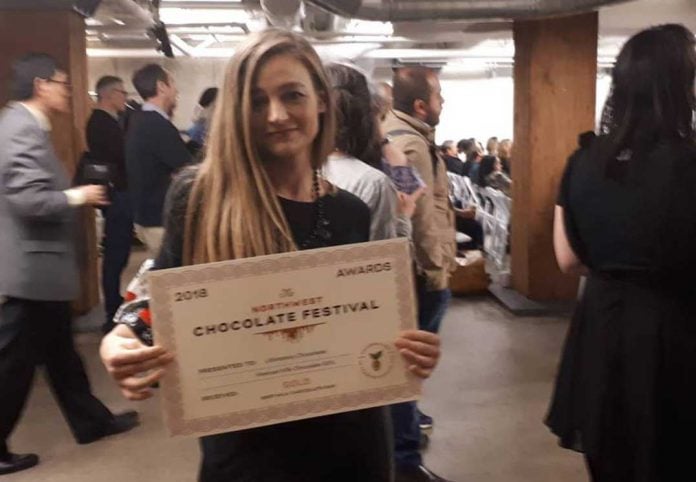 “I didn’t expect to receive the gold award,” said Ultimately Chocolate owner/operator Lisabeth Flanagan. “It was a real surprise when they announced I had won the gold award. I’m glad I entered (the contest).”

Ms. Flanagan explained the festival is a large gathering of bean-to-bar craft chocolate makers, chocolatiers, confectioners and chocolate lovers from around the world. “I didn’t have a booth at the conference-festival but I had sent my entry in advance, about a month ago,” she said.

After a week of judging all the entries in the various categories, the award winners were announced on November 9. In the weeks prior to the festival, chocolate makers submitted their chocolate bars for judging, and Ultimately Chocolate’s Mexico Milk Chocolate 50 percent bar was well-received by the judging panel, taking home first place in its category.

“The Mexican beans in the chocolate bar have a strong, unique flavor,” Ms. Flanagan told The Recorder.

Ms. Flanagan noted she has been selling the new Ultimately Chocolate Mexico Milk Chocolate 50 percent bar locally for a little while.

The award-winning chocolate bars and the CacaoCookie can be found at Loco Beanz Coffee House in Gore Bay and in Little Current. Orders can also be sent to info@utlimatelychocolate.com.