GORE BAY – While the Gore Bay town marina is now open after a province-wide reopening of some seasonal businesses was announced last week, it may not mean a lot of revenues for the Town of Gore Bay unless more restrictions are announced soon. As was reported recently, the Town of Gore Bay passed its budget for this year at a three percent increase, having made many reductions to meet this and it was revealed the town had garnered $169,000 in revenues last year on its marina.

“No, we assume it won’t mean we will be able make similar revenues that we had last year on the marina,” stated Gore Bay Mayor Dan Osborne on the opening of the marina, “unless we get a lot of traffic—a bunch of 100-foot boats here this summer. But at least we will be able to make up some of it.”

“The marina is now going to open on April 19. It is good news because locals will be able to get their boats back into the water,” said Mayor Osborne. “But with COVID-19 there will not be any American boaters, with the borders being closed, and I don’t see the amount of transient boaters being huge this summer, unfortunately.”

Mayor Osborne told the Recorder the washrooms at the marina will not be open, nor will the showers or laundry facilities. 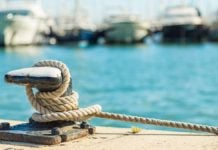