SAULT STE. MARIE—Although the typical theatre audience at the QUONTA Festival tends to be friendly, they also tend to be a bit of a tough sell, being largely made up of hard core theatre aficionados. So garnering the only full-on pure standing ovation of the festival was a pretty major accomplishment in itself, such that collecting the most awards of any of the productions in the festival was almost icing on the cake.

Adjudicator John P. Kelly said he was emotionally moved by the Gore Bay Theatre production of ‘Crime and Punishment.’

“It was nice that all of the actors received recognition,” said Gore Bay Theatre director Walter Maskel. “When you do a lot of roles like that it presents a very different challenge.”

Mr. Maskel noted that all of the productions, actors and actresses at the festival were outstanding, which makes the wins all the more gratifying.

The Adjudicator Award for light and sound, sponsored by the Espanola Youtheatre, was won by the Gore Bay Theatre.

“Richard’s brain pieces were really an incredible work of art that have to be seen in colour to truly appreciate them,” said Mr. Maskel. Mr. Gamelin has already received offers to purchase his set pieces as works of art.

The Adjudicator Award for properties, sponsored by ELATE (Elliot Lake Amateur Theatre Ensemble) was won by the ‘Incorruptible’ cast and crew of the Sault Theatre Workshop.

The Outstanding Director award, sponsored by Richard Howard, saw nominations for Andrea Emmerton and Walter Maskel of Gore Bay Theatre and Joshua Bainbridge of Gateway Theatre Guild. In the end it was Joshua Bainbridge who captured the adjudicator’s nod.

The Adjudicator Award for Integrity of Playing, sponsored by Thorneloe Theatre, was won by Michelle Goulet of Take Two Theatre.

The Adjudicator Award for stage management, sponsored by Ian Maclennan, was awarded to Colleen Halverson of the Sault Theatre Workshop.

The Adjudicator Award for Outstanding Newcomer to Theatre, sponsored by Espanola Little Theatre, had several nominations including Phoenix Deschene of the Sault Theatre Workshop; Victoria LeFort of Take Two Theatre; Brandi McCallum of Sault Theatre Workshop; Shawn Parker of Gateway Theatre Guild; and Zachary Smithers of Gateway Theatre Guild, but it was Victoria LeFort who gathered the award.

The icing on the cake for the Gore Bay Theatre team was an invitation to perform at Parry Sound’s Stockey Centre this summer. Although the performance has yet to be firmed up (“we have to make sure the actors can fit it into their schedules,” points out Mr. Maskel), being asked to put the play on at the centre that has played host to some of the most prestigious acts in Canada is no mean accomplishment in itself. 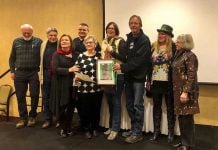 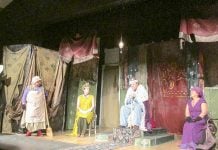