MINDEMOYA––Central Manitoulin residents celebrated the grand opening of their new Fire Hall No. 2, located at 6369 Highway 542 in Mindemoya, this past Saturday, May 26.

“This is state of the art,” said Councillor Derek Stephens, leading a tour of the new facility with pride. “There are people from Espanola here today. They’ve been here several times as they’re going to be building a new fire hall,” he continued.

Fire Hall No. 2 is a large red metal-clad building that contains a decontamination shower, a meeting/training room that seats up to 60 people and boasts a full service kitchen, five truck bays, an exercise corner and lots of storage space. “We’re centrally located to host MMA (Manitoulin Municipal Association) and other Island-wide meetings as well as training,” explained Councillor Stephens. “The facility is set up to be used as an emergency building, for long power outages in winter time and other emergencies. Everything can be run from the generator (coming soon). It’s all LED lighting and high efficiency everything.”

“A lot of thought went into the planning of this facility,” he continued. “Even the propane stove. Everything can be powered by a small generator.”

The official ribbon cutting followed facility tours and a barbecue. Truck tours were a big hit with the children. Mayor Richard Stephens welcomed everyone saying, “This has been a long time coming but we now have something we can be very proud of, and we are. It took a grand effort and a lot of people. It took engineers the job of building the structure on paper. It took Rob Sheppard and his crew to make that paper into a finished product. It took people like John (Fire Chief John Reid) to insist on what he wanted to see for the advantage of his people, so that we have what we need when we need it.”

Mayor Stephens noted he was proud of the equipment, building facilities including training and storage spaces. “Even a workout place,” he said. “Everything you need to have for your team.” He thanked Fire Chief Reid, Perry Keller and the entire fire team as well as Sylvio Berti, the project coordinator, who worked with all of the various organizations involved.

Fire Chief Reid thanked Central Manitoulin council. “Council has spent a lot of years on this. This council stepped up. It’s a good facility and we’ll get a lot of years out of it. We don’t have to use outside facilities. We can do everything in here thanks to council.”

The grand opening concluded with a live auto extrication demonstration by firefighters and EMS workers. 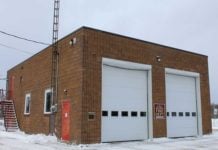