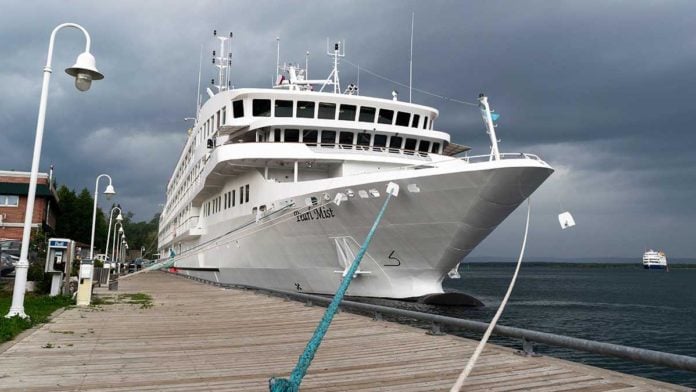 ﻿LITTLE CURRENT—Following a two-year hiatus due to COVID-19 restrictions, cruising on the Great Lakes resumes this year. A significant number of cruises have been scheduled for stops at the Port of Little Current and Killarney this season. The industry says not only are cruise lines interested in supporting the local economy, but they are taking steps to improve their environmental impact as well.

“We are thrilled,” said Stephen Burnett, executive director of the Great Lakes Cruise Association (GLCA). “It looks as though the cruise industry is voting with its feet in scheduling significant inventory this summer, and even more next summer. In terms of the business itself, it seems to be solidly coming back.”

Mr. Burnett believes most of the cruise lines are committed to sustainability. One way to do this is sourcing local ingredients. “Every cruise has a marine agent who supplies all of the things they need while they’re cruising a region and we’ve made them aware that Ontario generally has wonderful farm-to-table opportunities, with great growers in different parts of the province producing a variety of fresh produce, not only fresh vegetables but excellent meat, poultry, and fish,” he said.

Cruise ships have the ability to order fresh vegetables in advance, for example. “The farmers have a pretty good almanac of when their crops mature. We’ve had some marvelous conversations with some of the chefs on board these ships,” he said.

He thinks if communities are motivated to recognize cruise ships as part of their consumer base, this type of sustainability can spread even further around the Great Lakes. “We believe sustainability is the way forward. We are absolutely committed to that.”

The entire cruising industry is making significant efforts towards being more environmentally friendly, said Bruce O’Hare of Lakeshore Excursions based in Little Current but operating throughout the Great Lakes and St. Lawrence River. Although it hasn’t yet happened here, many (river) ports in Europe and the ports of Montreal, Halifax and Vancouver in Canada have designed shore power. That means when ships dock at a port, they shut off their engines and plug in rather than leaving their engines on to run their generators to keep lights on and refrigerators cold, “just like someone would do with their sailboat at Spider Bay,” he noted.

There are rules and regulations about dumping sewage or wastewater in the Great Lakes, and ships have their own on-board water treatment plants. “So they make their own water and they have sewage treatment plants as well, very similar to the technology that’s used in Little Current,” Mr. O’Hare explained. “When they get into ports, Sault Ste. Marie, for example, they hook up just exactly like at Spider Bay or at Wally’s for pump outs. They’re very conscious about making sure the Great Lakes stay clean, and it’s a very regulated industry.”

No unlawful discharge occurs on Great Lakes waters, and solid waste is retained on board until it reaches a port of call where it can be handled by local municipal waste providers, states Cruise the Great Lakes (CTGL), a coalition of states, provinces, ports, conventions and visitor bureaus, and cruise lines (including several that visit Little Current).

Great Lakes cruises are “unique in both experience and impact,” said CTGL. The ships are limited in size by the St. Lawrence Seaway system, with the largest holding a maximum of 400 passengers. The average size of Great Lakes cruise vessels is fewer than 200 passengers, 15 times less than the average 3,000 passengers on an ocean-going cruise ship.

Carbon emissions from fuel are more of a shipping issue on the Great Lakes, said Mr. O’Hare. “You have to remember that about 98 percent of the ships on the Great Lakes aren’t passenger ships. They’re cargo ships, hauling automobiles, steel, soybeans, wheat and other goods.”

He points to the launch of the first hybrid freighter on the Great Lakes this year. It’s electric and diesel powered, he said. “The shipping industry is generally moving in that direction.”

Specific pledges include maintaining a light shoreside footprint, sourcing food locally wherever possible, using shore power where available, and working toward to goal established by the Cruise Lines International Association in 2018 of a 40 percent reduction in the rate of carbon emissions across the cruise industry’s global fleet by 2030.

Some changes are small: Lakeshore Excursions used to provide bottled water, but in 2019 they put in a water cooler at the Ojibwe Cultural Foundation (for people to fill refillable water bottles). “We stopped providing bottles of water,” Mr. O’Hare said. “We have water we serve to the passengers in compostable cups that are made out of sugar cane. Those are some of the small things that our company is doing.”

GLCA is encouraging its member cruise lines to abandon offering everyone a bottle of water as they get off the ships, added Mr. Burnett. “Some of them may still do that but more and more, we’re finding they’re installing refill stations on board the ships so passengers can take their own bottle and refill that at a refill station.”

This offers a wonderful marketing opportunity as well, he said. “You can brand your bottles you give people with the name of the cruise line, bottles you give people that they can refill seven times on a voyage. What a fantastic opportunity!” Some of the cruise lines are actually buying into that and installing refill stations. “Not all of them yet but I would say we’re making some pretty good ground in that area.”

The cruise industry is dependent on tourism, Mr. O’Hare said. “Full stop. It is incumbent upon the industry to protect the natural beauty of the places it visits. There are, speaking of the cruise industry globally again, new ships that don’t have anchors anymore, because anchors can do damage to the coral reefs. When they get to a destination, they push a button and the propellors keep it in one location without throwing an anchor overboard. So yeah, it’s an important thing for the industry. Their success in the future depends on protecting the environment. It would be counterproductive to the industry to damage the environment.”