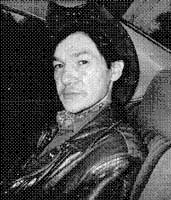 In loving memory of Daniel Endanawas, a resident of Sheshegwaning, who died at his residence on Monday, September 30, 2013. He was born at Sheshegwaning, son of the late Thomas and Rita (Pitawanakwat) Endanawas. Daniel had worked in carpentry, building houses for First Nations housing. In earlier years he liked to play hockey, and enjoyed watching his favourite team, the Maple Leafs. He also enjoyed hiking, puzzles, playing guitar and listening to music. Daniel’s favourite time was spending time with family and friends. Many precious memories will be cherished by his family. Daniel is survived by a son Matthew. Loving brother of Darlene Cada and husband Sam, Winnifred Panamick and Robert Endanawas. Predeceased by brothers and sisters Kathleen Fisher, Wayne Endanawas, Cynthia Endanawas, Laurenda Yellowhorse, Margaret Endanawas and Randolph Endanawas. Daniel is also survived by many nieces and nephews, aunts, uncles and cousins. Relatives and friends called at the Sheshegwaning Community Complex after 4 pm on Tuesday, October 1, 2013. The funeral mass to celebrate Daniel’s life was held at the Complex on Thursday, October 3, 2013 at 11 am with Fr. Jim Kelly as celebrant. Cremation to follow. Online condolences may be left at www.culginfuneralhome.ca. Culgin Funeral Home, Gore Bay, 705-282-2270.