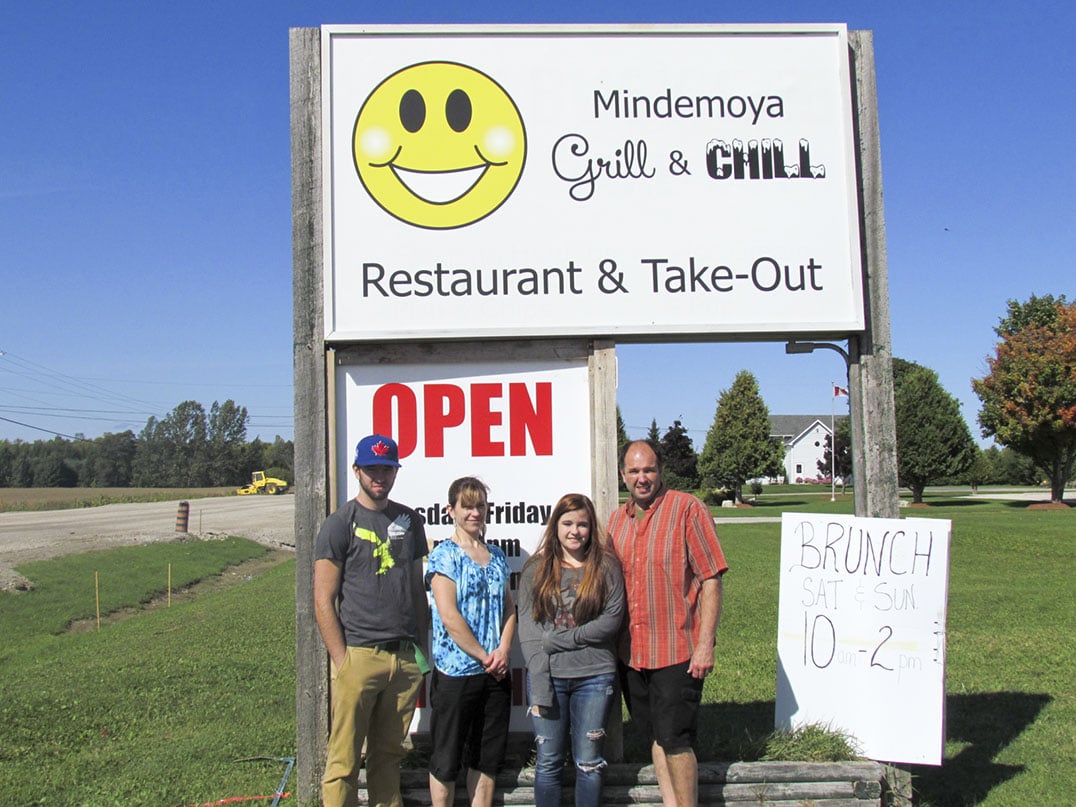 MINDEMOYA— Manitoulin can boast another year round restaurant as the Mindemoya Grill and Chill has opened in the old Happy Moose eatery. James and Angie Moggy have wanted to open a restaurant for some time and with the sale of the building, the dream became a reality.

The Moggys are very grateful to everyone who helped them with the opening from their children, Corey and Cassie, who helped with naming the business, to Angie’s parents Jennifer and Bill Orford, to her sister Amanda Gibbons.

“We appreciate the help of everyone,” Ms. Moggy said, “including Karen Wyman, Vicki and Darryl Kennedy and Dean Tipper who helped with everything, Barb Moggy and Kathy Graham who made pies, Charlene Van Horn who did dishes, and Bob Pearson of Beacon Images who made our signs and also a special thank you to Don and Lou Arnold and Perry and staff at Keller’s Garage for the beautiful flowers and plants.”

“We had a good first week,” Mr. Moggy added. “We appreciate the fact that so many people came out and we hope it continues.”

The menu for the new restaurant is extensive, ranging from veggie egg rolls and jalapeno poppers as two of many appetizers, a soup of the day, salads as a side or meal dish and a sandwich called the grandwich, which includes thick sliced bread, ham, salami, tomato, lettuce, mayo and cheese. There are all kinds of hamburgers offered including the works which is a double patty burger with bacon, cheddar and Swiss cheese, fried onions and mushrooms. Pickerel is served at the Grill and Chill as well as hot sandwiches and pork chops, chicken and roast beef dinners. The entrees come in either a regular or a seniors’ portion. People will be happy to learn that the Moggys have kept Eugene’s famous pork schnitzel on the menu with plain, Jager and Hawaiian pork cutlets offered. There is also a children’s menu and a variety of desserts will be served daily including pie with ice cream, banana splits, sundaes and ice cream floats. Cinnamon buns will be coming soon and other items will be added to the menu.

The hours of the new restaurant are from Tuesday to Thursday from 11 am to 9 pm and 11 am to 10 pm on Fridays. Saturday sees a 10 am to 10 pm opening and 10 am to 9 pm on Sundays. The weekend will see a brunch served on both days from 10 am until 2 pm and a supper buffet from 5 to 8 pm. The restaurant is closed on Mondays and patrons are reminded that the meals are cash only.