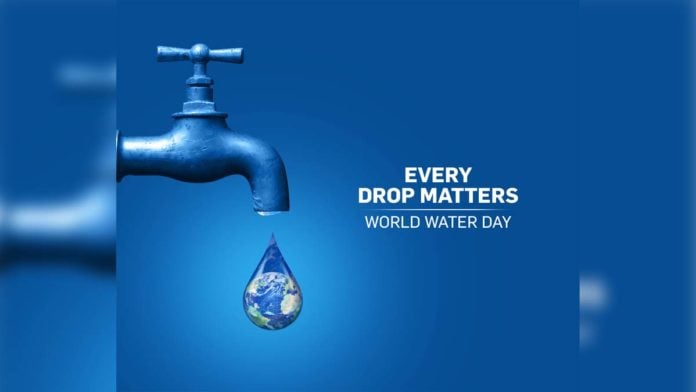 MANITOULIN—Approximately eight million people who live in the Great Lakes basin (on both sides of the border) rely on groundwater for clean drinking water, sanitation systems, farming and food production, industry and healthy ecosystems. ‘Groundwater: making the invisible visible’ was the theme for World Water Day 2022. For World Water Day on March 22, The Expositor took a deeper look at our own groundwater.

Groundwater is found in underground aquifers and feeds springs, rivers, lakes and wetlands and seeps into oceans. It is replenished mainly by rain and snow infiltrating the ground. As climate change worsens, groundwater will become more critical.

On Manitoulin Island, we have lots of fractured limestone beneath the soil, said Seija Deschenes, project coordinator for Manitoulin Streams. “There are lots of places where we have groundwater streams.”

You might see surface streams that suddenly appear to end, but they actually go underground before popping back up and continuing to flow further downstream. “There are other places where groundwater springs come up and feed into our local streams and make them cold water streams,” Ms. Deschenes added. An example would be Blue Jay Creek.

“That one has lots of underground aquifers that bring that springwater up and keep the stream really nice and cold,” she explained. “That’s extremely important when it comes to certain fish species, like brook trout. Brook trout require cold water streams to live in so if the water temperatures increase, it will become unsuitable for them to live there. They have a threshold for temperature and can only live in a certain temperature of water, so if our streams start to warm up, then that’s going to impact a lot of different species or those that come in to spawn in some of our streams.”

Manitoulin Streams uses nature-based solutions to protect and improve the waterways and shorelines they work on, which in turn impacts groundwater. “Restoring the banks and planting a lot of trees along our shorelines is really important because as those shrubs grow, they provide a lot of shade that will keep that water cool as well and protect it from the sun beating down on it as we get some warmer weather, which seems inevitable.”

They also use bioengineering techniques, where engineers narrow the streams. Narrowing the streams increases water depth. A stream that was really wide where, for example, livestock would go in and erode the banks, would become shallower as it continued to widen. Shallower water will warm up quicker. “By putting in boulder clusters to reduce the amount of space the water has to go through, it actually increases the water level a little bit,” she added.

Different weirs Manitoulin Streams had placed inside the streams help with holding back water so that in warmer months, the fish can still move up the streams to spawn, especially chinook salmon, which often experience problems because they enter the streams to spawn in late August and September, when the water is usually a little bit lower. Building that natural infrastructure allows the salmon to get into those prime spawning areas and reproduce. “That will help out with some of the climate change impacts, as well as all the trees and providing that shade along those corridors for the fish,” said Ms. Deschenes.

Islanders can plant trees on their own property to help, but the type of tree would depend on where their property is. Tree species tend to have a preference for wet or dry. For example, cedars will thrive where it’s a little wetter, as will red osier dogwood and alders, she noted. “Whereas if you have something like white pine or red pine, they like it sandier. An Island example where there’s a lot of sand would be the Providence Bay area.” Manitoulin Streams has done some restoration work along those high embankments where there’s a lot of sand underneath, and the pines like it there.

Tamarack or larch prefer a little wetter area and maples like it a tiny bit drier, she said. “Poplars like it wet and they are very, very fast growing. If you want something to establish quite quickly, poplar does quite well. They do have a shallow root system so sometimes you’ll find in a big windstorm they’ll be the first to tip over or the other thing is, is they are a sought-out food source by beaver.”

For lakefront property owners, she suggests planting trees in areas where a lake view Is not needed or alternately, plant trees that are spread apart in order to maintain a nice view. “The roots will still absorb all of those nutrients that might be flowing down,” she said. Roots act as a filter to prevent many contaminants from entering the water.

“A lot of people are on septic systems and if you have trees right along that shoreline and in the yard, they’re absorbing many nutrients that might otherwise go out into the lake,” she said.

Ms. Deschenes also encourages people to pump out their septic regularly, at least every two years, or to change it quickly if it’s faulty.

One thing that affects groundwater is “all the garbage that we’re seeing along the roads.” Ms. Deschenes noted that in a clean up last year, she collected 36 bags of garbage from one side of a short stretch of Highway 6, between White’s Point Road and the Northeastern Manitoulin and the Islands landfill. “As that breaks down, all those chemicals that go into creating the plastic goes into the water, she said.

She’s hoping there will be an Island-wide clean-up this year. It’s something she’s just starting to plan and is hoping to recruit everybody across the Island to help out. “We can have a huge impact in reducing the amount of plastics that could potentially go into the stream watersheds or blow right into the lakes, because that happens all the time.”

She pointed out that Canadians throw away three million tonnes of plastic waste each year. “Only nine percent of our plastic waste is recycled annually. The rest goes to landfills, waste-to-energy facilities and into the environment. When plastic enters our environment, it very slowly breaks down into smaller and smaller pieces, polluting the water we drink and harming the outdoor places we love. They breakdown to become what is known as microplastics.”

Approximately 10,000 tonnes of plastic pollution enter the Great Lakes every year, coming from coffee cup lids, plastic cutlery, foam dock materials, nylon ropes, plastic bags and wrappers, Styrofoam, personal care products, wipes and disposable contact lenses. “They continually break down through weathering, into smaller and smaller pieces, never going away completely,” she said. “This is leading to an increase in human consumption of plastics. On average, people ingest five grams of plastic every week, which is equivalent to the weight of a credit card.”

Ms. Deschenes pointed out that another big source of microplastic pollution is fibres from clothing. Almost 80 percent of clothing manufactured today contains artificial fibres such as polyester, nylon, acrylic, etc. “When these fibres are shed from clothing into our water through washing or direct contact like swimming, they don’t biodegrade like natural fibre but begin to slowly accumulate in the environment,” she added. “Microfibres in our aquatic habitats can be ingested by fish, wildlife and humans.”

Washing machine filters can reduce the accumulation of microfibres in our environment and our waters. On March 22, NDP MPP Jessica Bell (University-Rosedale) announced she would reintroduce her bill to ensure all washing machines sold in Ontario are equipped with a filter that reduces the shed of microfibres into water and soil systems.

Research conducted by the University of Toronto Rochman Lab and supported by Georgian Bay Forever (GBF) showed that filters captured an average of 87 percent of microfibres in a laboratory setting, and in a real-life setting were shown to ultimately reduce emissions from a wastewater treatment plan. Filters installed in about 10 percent of households can reduce emissions by at least 10 percent, or potentially more when combined with education to the greater community, according to the report. Washing machines aren’t the only source of microfibres found in the environment but are a major contributor.

“Our study with the University of Toronto estimated that if the approximately 1.2 million households in Toronto all had washing machine filters, then the annual microfibre capture could be in the range of 12 to 166 trillion microfibres diverted from going down the drain,” said David Sweetnam, executive director of GBF.

According to the Ontario Ground Water Association, almost 28.5 percent of the population in Ontario, including most rural homes and businesses, depend on clean and safe groundwater for their water supply: it is vital to the well-being of our communities and natural ecosystems, and we all must protect it and use it sustainably.