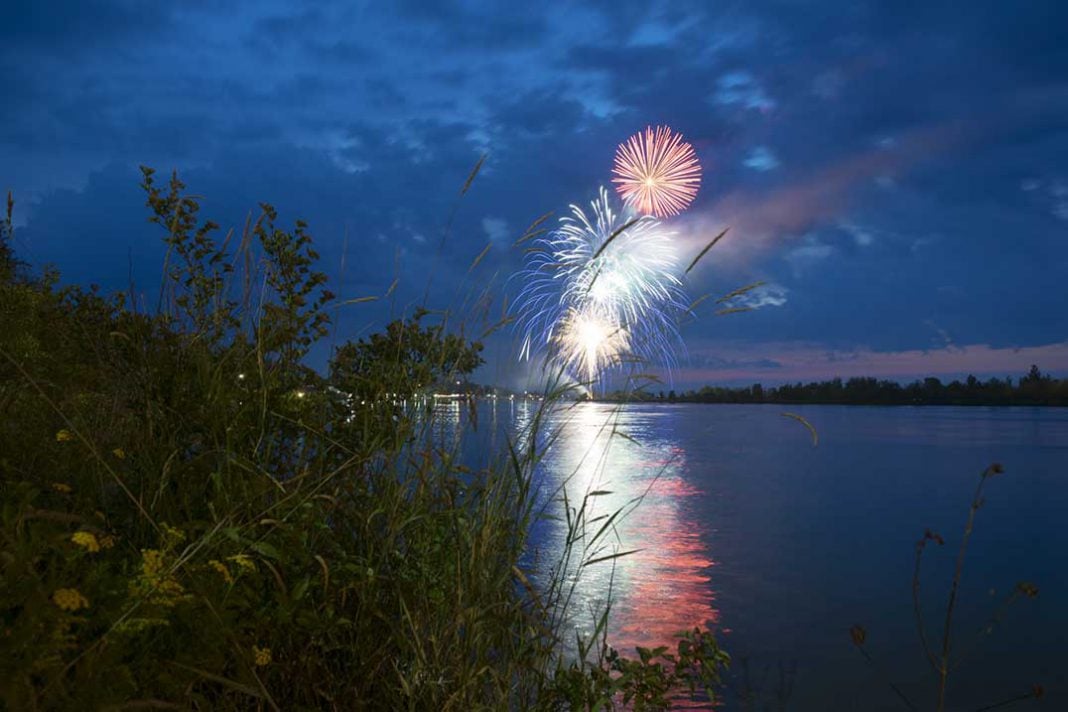 LITTLE CURRENT—The weather came together for the Little Current Lions Club Haweater Weekend in just about a perfect storm, quite literally, as the heavy downpour Sunday afternoon lasted just long enough to take the edge off the heat and humidity while soaking things down enough to help ensure the fireworks display went off safely.

Little Current Lions Club master of opening ceremonies Marcel Gauthier brought regrets from Algoma-Manitoulin-Kapuskasing MP Carol Hughes and Algoma-Manitoulin MPP Mike Mantha who had previous commitments (Mr. Mantha did make it to the Haweater Parade, where he could be seen enthusiastically tossing Frisbees into the crowd), but Northeast Town Mayor Al MacNevin was on hand to officially thank the Little Current Lions Club members and their volunteer helpers for their efforts.

“Oh my gosh yes!” said Little Current Lions Club President Bruce Burnett when asked if the weekend was a success. “This was one Haweater Weekend we will not forget. We had the weather, we had the crowds, and everybody seemed to be here to have a great time. It was a little warm, but that sure beats it being cold and wet for sure.”

New this year were the folks from the Carver Kings, with three professional chainsaw artists creating incredible art from raw logs. The beautiful carvings were being snapped up almost as fast as the carvers could wield their chainsaws.

“I was talking to Paul, the fellow from the Carver Kings, and he was telling me that he that if we have him back next year they will be bringing six carvers,” said Lion Bruce. “They were very happy with the crowds, there was always a good crowd of people there watching them work.”

Ski-Mazing Water Sports were another big hit that was new to this year’s festivities. “There was a lot of success with the parasailing, it really went over well,” said Lion Burnett. “They were very happy with how it went for the first year.” More than 100 people took to the air, parasailing to get a bird’s eye view of the festivities at Low Island and across the North Channel.

Gateway to Life Church really knocked it out of the park with the soapbox derby. “They had something like 90 participants,” said Lion Bruce. “Mayor Al (MacNevin) and I were there to cut the ribbon and get things started and it was non-stop fun from then on.”

The cardboard boat races are a perennial Haweater favourite and this year was no exception. From the hilarious Titanic award winners’ dunking to the ultra cute sight of little mariners pulling their cardboard creations forward doggedly with their tiny paddles, it was a true family event. This year’s Business Class winners, Heartwood Mushrooms, put naysayers swiftly to shame as their precarious appearing vessel won not one, but two events, managing to survive to the second finish line before disintegrating into a sodden but glorious pile of fibre.

Among the standard Haweater fare things were up as well. “Our numbers were up at the Hawdance this year by about 30 or 40 people,” said Lion Burnett. “We have a couple of adult things to help fundraise, but Haweater Weekend is all about family.”

The ball tournament had a great turnout, and the hot weather ensured that both players and spectators were thirsty and hungry.

The Haweater Parade took a new route this year, avoiding the main street downtown and the floats, Shriners and Sudbury Pipe Band were great additions. This year’s winners of $50 prizes were the 1951 Truck, Manitoulin Centennial Manor (aka the Bowerman family) and the Three on Three Hockey Champs.

Leapfrogging ahead of the parade was Alan Boyd, former community services officer with the OPP and leading light of the Manitoulin Amateur Radio Club. Mr. Boyd ensured a safe passage past each of the side streets along the route. “It’s part of what we do as the radio club,” he smiled.

Lion Bruce said the Little Current Lions Club was very appreciative of the sudden downpour that preceded the fireworks. “We were taking a lot of heat because of the bans and everything, but that rain really helped to dampen things down, in more ways than one. The crowds really love the fireworks, a lot of people tell us it is the highlight of the weekend so we are very grateful to the NEMI Fire Department and the fire chief and his team for helping ensure that everything went off without a hitch. The professional company that sets up the fireworks and sets them off really know their business so we had the confidence to go ahead, but the rain sure helped.”

If there was a fly in the ointment this year it was the drop in numbers for volunteers, so the Lions want to put a call out for help next year.

“Our club members and the people who came out to help really stepped up this year, but we were definitely down in the number of helping hands,” said Lion Bruce. “None of us are getting any younger and it takes a lot out of us when the hands are short.” Sadly missing from the volunteer roster this year were stalwarts like the incomparable late George Pennie of Manitowaning and late Ron Bowerman of Honora Bay. “Those guys always came out to lend a pair of hands, and usually brought a few more pairs along with them,” said Lion Burnett.

Helping out this year were a number of students looking to garner their volunteer hours and their help was very timely this year.

“Those young people really made a difference,” he said. “We had a lot of Lions who were doing triple duty this year and it was great to have a few younger folks helping out.”

Lion Bruce and the rest of Little Current Lions Club volunteers were still hard at it on Monday afternoon, taking down the last of the bouncy castles and cleaning up the various venues around town.

From The Expositor staff, and on behalf of so many of our readers who enjoy the fruits of the Little Current Lions Club members and their volunteer helpers: THANK YOU!