LITTLE CURRENT – The evening of June 19 was filled with music and light, as an outstanding lineup of Indigenous musicians was featured in a series of mini-doc/performances at ‘Giiwewizh,’ the Summer Solstice Indigenous Festival, with the night being closed off with a unique storytelling session written and narrated by Aundeck Omni Kaning’s Herbie Barnes and illustrated by a swarm of 200 rugged multi-coloured drones that took to the night sky.

Also attending the festival was Algoma-Manitoulin MPP Mike Mantha, who rode in for the event from Elliot Lake by motorcycle.

Ogimaa-kwe Corbiere began the evening by thanking the organizers, Indigenous Tourism Ontario (ITO) and the hosts in Ottawa, thanking and welcoming the audience to the traditional lands of the Anishinabek peoples of Mnidoo Mnising. She acknowledged and congratulated Regional Chief Hare.

Ogimaa-kwe Corbiere then referenced the genocide of her people and the victims of colonization all around the world before calling for a moment of silence. She went on to say that it was her “absolute honour and privilege to see so many of you here to enjoy this COVID-safe event.”

She went on to note that the evening would not only be filled with amazing music and how inspiring it was to witness a “one-of-a-kind ITO drone show, inspired and narrated by our own Aundeck Omni Kaning member Herbie Barnes. We are incredibly proud of you, Herbie, you are an inspiration to your fellow Indigenous members and youth.”

“I wrote the story and the drone company put together a drone show to go with it,” Mr. Barnes told The Expositor. “They said this is the first time they have done this with a story, usually they are doing it to music.”

As for the story, Mr. Barnes explained “I created a new legend based on the Twins, equal part light and equal part dark. The motif is a foundational concept in Anishinaabe storytelling and fable and delivers a powerful message of living in balance.”

As the mini-documentaries got underway, Ottawa host ELMNT FM radio in Ottawa introduced each of the 16 Indigenous artists from across Canada showcased in short documentaries produced by Jennifer Podemski and directed by Sarain Fox. Each artist told a visual story of their work, highlighting perspectives and meditations in connection to land/place, identity and their creative process.

The hosts noted that storytelling is an important part of Indigenous cultures around the world and that narrative sovereignty lies at the heart of the Giiwewizh project. “Indigenous people continue to advocate for the reclamation of their cultures, voices and narratives. Giiwewizh celebrates artistic excellence in the Indigenous music community, the invaluable contributions to the mainstream music scene, and the resilience of Indigenous voices.”

The first artist to be featured was Kanen, from the Innu community of Uashat mak Mani-Utenam, who unveiled her sensitive folk universe “reminiscent of humour and gentle melancholy.” Kanen delivered an “intimate and touching show marked by her mature voice, accompanied by ukulele, contrabass, guitar and energetic percussions.”

Next on virtual stage was Logan Staats, accompanied by his sister Leila. “Once in a red moon, an artist emerges on the scene as if fully formed,” noted his citation. Born on the Six Nations Reserve and raised in Brantford, Logan Staats started writing and performing music in his early teens. “His haunting and distinct voice has earned him multiple opportunities to share the stage with acts like Buffy Sainte-Marie, Keith Secola, Mumford and Sons,” just to name a few. Still a young man, Mr. Staats is now regarded as an accomplished, multi-nominated and an award winning artist himself. Forever a student of great music, Mr. Staats sincerely enjoys jamming, collaborating and learning from his contemporaries and other recording artists that inspire him.

Morgan Toney kicked the vibe up a notch as the Mi’kmaq fiddler blended the fiddle with Mi’kmaq songs, including the ‘Mi’kmaq honour song’ and the ‘Ko’jua.’

Closer to home, Nimkii from Wiikwemkoong Unceded Territories is a world renowned hoop dancer, champion dancer and singer. Nimkii has collaborated with and performed on stage with award winning artists but is now blazing his own path, “blending traditional singing drumming and dancing styles with contemporary music and dance.”

Artist Shawnee Kish makes her mark using music as medicine, utilizing a big soul voice to bring an empowering message. CBC named the two-spirit singer as its 2020 Searchlight winner and Billboard named Shawnee as one of their ‘Artists You Should Know.’ MTV put her on their list of their Top Gender Bending Artists. Shawnee’s songs like ‘Mirror Me’ and ‘Warrior Heart’ have become anthems of hope and strength and were performed at this past New York City 50th Stonewall with global artists Lady Gaga and Madonna, as well as performing at the 2020 Canada Day for the prime minister’s event in Ottawa.

Snotty Nose Rez Kids (SNRK) is a Canadian hip hop duo of Haisla (Indigenous) descent from Kitimat, composed of rappers Yung Trybez and Young D. Formed in 2016, SNRK released their first self-titled album in January 2017 and followed up that same year with their second full-length, ‘The Average Savage,’ in September 2017. The latter secured them Best Hip Hop Artist at the Western Canadian Music Awards, and cemented the duo on 2018’s Top 10 list of the coveted Polaris Music Prize and a 2019 Juno Nomination for best Indigenous Music Album.

The North Sound’s Alt-country sound hit the scene in 2014. Started by Forrest Eaglespeaker and supported by his partner Nevada Freistadt, The North Sound was created as a way to share stories in keeping true to Forrest’s Blackfoot identity and traditions from Treaty 7 Territory.

Following the musical mini-docs and performances the vehicles containing the audience processed out into a nearby field where they were lined up for the spectacular drone show produced in collaboration between Mr. Barnes and North Star Fireworks. 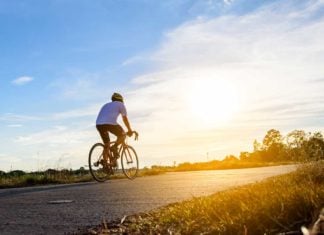