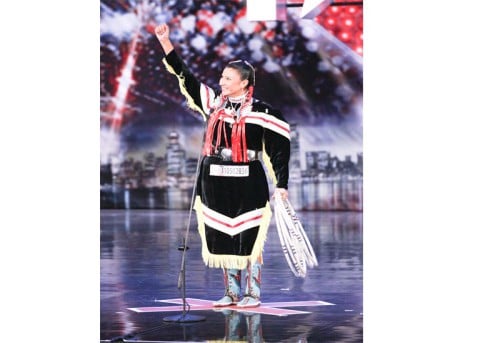 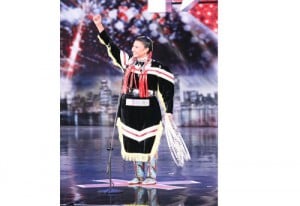 TORONTO—Wikwemikong’s Lisa Odjig not only has two world championship hoop dancing titles under her belt, she can now add nation-wide television fame to her list of accomplishments.

Ms. Odjig, who now resides in Toronto, can be seen on CityTV’s Canada’s Got Talent. This is a show where Canadians from coast to coast are encouraged to audition, showcasing whatever their talents might be before a judge, and finally in front of a panel of judges plus an entire (and very vocal) studio audience.

Canada’s Got Talent is the newest in an interntaional series of ‘got talent shows,’ originating in the UK.

Until learning of the Toronto auditions, Ms. Odjig explained that despite her busy job, she continues to keep fit and maintains a healthy lifestyle, which includes hoop dancing, a gift taught to her by her uncle Gordie Odjig and nourished by her parents Franklin Fisher Odjig and Margaret Jackson.

Drawn to it indeed, as the hoop dancer won the world championship in 2000 and 2003 and seven other championships across North America.

“I heard the advertisements for Canada’s Got Talent on the radio and thought I should give that a shot,” she said.

Next came an online application followed by an audition in Toronto on September 29.

Ms. Odjig got to work and made herself a new dress and beaded accessories and began practicing with her hoops every chance she got.

When the audition date came, Ms. Odjig said she woke up at 5 am, while it was still dark, in order to ready herself for the long day ahead, braiding her hair and putting on a first base of make up before heading off to the Rogers Centre. A good friend agreed to come with her for moral, and baggage carrying, support.

“When we arrived, there were already about 100 people outside the door and we had to wait in line for two hours,” she explained. “Once we got inside the doors, I registered and then there was even more waiting.

After the final hair and make up touches and the donning of the new regalia, Ms. Odjig was ready to face the judge.

“I was nervous, but ready,” she said, confidence in her voice. “It takes a lot of courage.”

When her number was called, the dancer faced her first judge. He asked questions about her, where she was from and about the dance.

“As soon as the song started I just took off,” Ms. Odjig said. “I knew this was my only chance, right now, so I gave it 110 percent. I felt so good about the performance.”

“He was kind of speechless,” she chuckled, remembering the judge. “He just said ‘Wow, that was good…actually, that was awesome. We’re really lucky to have you here’.”

After that moment it was a waiting game, over a month of waiting, in fact.

On November 5, Ms. Odjig went to work early and, checking her emails, saw one from Canada’s Got Talent.

“I clicked on open and saw the word ‘congratulations’ and that perked me up right there,” she explained, excitement in her voice as she recalled that day. “I was like, ‘oh my gosh, I made it’!”

Not one to lose focus, Ms. Odjig said she shared the news with one of her colleagues, then got back to business, centering on her work.

She had to wait another month before getting another taste of the show, as December 5 was the next audition, this time in front of a live audience. “I got lots of emails from Canada’s Got Talent, explaining that I had to do the exact same performance with the exact same hair, make up, song, dress, everything,” Ms. Odjig explained. “Because that’s the performance that got you there.”

“It is one of the most nerve racking experiences in hoop dancing I’ve ever had, even more so than the world championship,” she continued. “I was excited and nervous at the same time.”

The hoop dancer recalls that audition as though it were yesterday, from listening to the roaring crowd backstage, its cheering, booing and the noise of the ‘X’ as one of three celebrity judges—actor Martin Short, opera singer Measha Brueggergosman and performer Stephan Moccio—gave an act a failing grade (each judge either awards the act with an ‘X’ or a check mark, each with its own sound).

When it was Ms. Odjig’s turn on stage, with all of the positive energy she could muster, she aced it. “It went awesome,” she recalled. “There was thundering applause and a standing ovation. It feels like a roar,” she explained of the audience, “and it’s all coming at you. There’s so much positive energy.”

Ms. Brueggergosman told her how confident she looked from the moment she walked out on stage while Mr. Short asked Ms. Odjig about herself and the dance. Judge Moccio wanted to know about her work. Each judge gave her their stamp of approval. “I’m glad they got to know that I’m a working woman who is helping to keep my culture alive,” she added.

Ms. Odjig was able to score herself another performance before the judges, when in January, in a segment of the show known as the ‘cutdown,’ they picked the hoop dancer as among 36 of the acts from across Canadian cities to carry on. In it, Ms. Odjig did a pre-interview with host Dina Pugliese before walking into the room with the three judges. “They had absolutely no expressions on their faces. They just stood there until Chris finally said, ‘Lisa? We’ve seen a lot of hoop dancers across this country and you’ve got a lot of work to do,’ shaking his head. ‘But you’re going to the semi-finals!’” she recounted him saying. Her next performance is scheduled for Sunday, April 22 at 8 pm on CityTV.

“I like to keep my personal emotions in check, but I was very happy,” Ms. Odjig shared. “I wish now that I had gone up to shake their hands or given them a hug or something. I just walked off.”

“Me making it into the semi-finals saw the 2012 world championship hoop dancer (Dallas Arcand) eliminated,” she explained. “I was very fortunate. I’ve already made a new dress and beaded hair accessories and I’m working out. I got a new bike and I practice after work. The judges say they want to see more.”

The challenge, besides executing the perfect hoop dance, is to do so in 90 seconds, the maximum time allotted for an act. “That’s the shortest hoop dance I’ve ever had to face,” Ms. Odjig said. “I have to figure out what designs flow best in 90 seconds. There’s no time for mistakes, it has to go as smoothly as possible.”

“Oh!” she exclaimed to this reporter from her Blackberry in Toronto. “I just passed a Canada’s Got Talent billboard. There are always reminders, it’s always just in the back of my mind.”

“This is definitely a great experience,” Ms. Odjig continued. “I’m really happy to be a part of this. Every time I dance, it’s never just for me, it’s for everybody, even though the spotlight’s on me. It’s a dance of celebration and celebrating life. Hopefully, for people watching, it will make them feel better. It’s a healing dance.”

“Prayers are always welcome,” she laughed. “Oh my goodness, you don’t know how nervous this can feel at times. Imagine yourself backstage and hearing loud and thundering roars from audience members clapping or booing? The anticipation of not knowing when it’s your turn to go up on stage in front of judges and a live audience all looking at you to judge. But when the outcome turns out even better than you thought, what a relief and a time to celebrate and keep believing in yourself!”

Uncle Gordie Odjig told The Expositor that the community of Wikwemikong is very excited about his niece’s foray into the world of television.

“Lisa just goes ahead and does things and then people find about it,” he laughed. “I told her these hoops would take her all around the world.”

“I taught her the basic moves then told her to just fly on her own,” Mr. Odjig explained of her hoop dancing. “She was the first woman to win a world championship. She’s a good inspiration to students that you can do what you always wanted to do. I feel that she’s representing First Nations people all across Canada through this.”

“She’s put Wiky on the map before and she continues to do so,” the proud uncle added.

On April 22, tune in to CityTV at 8 pm to watch Ms. Odjig in her latest performance, and be sure to vote for her too. Votes can be made through Facebook, Twitter, phone, text (for Rogers customers only) or online at www.canadasgottalent.

com/vote. Watch the screen for Ms. Odjig’s corresponding vote number and vote up to 10 times.