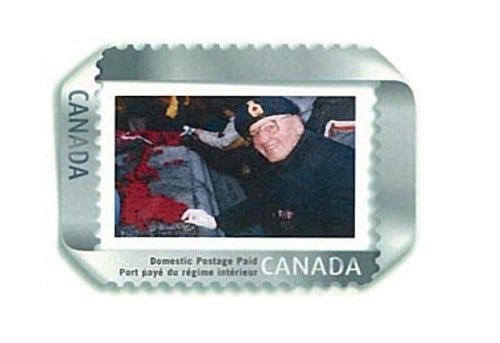 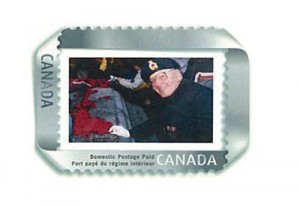 LITTLE CURRENT—Humphrey Beaudin was an 18-year-old when he enlisted in the Canadian army, fresh-faced and ready to see more of the world after spending two-and-a-half years sailing the Great Lakes. He is a lifetime citizen of Little Current and well remembers 1944 when his two elder brothers were already overseas and he was eager join them in service. Neither he nor his family could have ever imagined the changes he would face internally after World War II, having been faced with death and peril over and over again.

It was Christmas Day in 1944 when Mr. Beaudin first set foot on British soil, after completing two months of training in Canada. From there, the young man saw action in Belgium, Holland and Germany as a member of the Scottish Regiment.

“I saw lots of action during the war, lots of killings,” he said softly during an early April interview. “I saw lots of people killed around me, with me.”

Mr. Beaudin has been diagnosed, almost 70 years later, with post traumatic stress disorder (PTSD), a topic that’s been receiving more attention with a dramatic increase in veteran suicide rates across North America, especially among the numbers of Iraq and Afghanistan war vets. In Mr. Beaudin’s time, a soldier was warned to never talk about his experiences, to internalize them and to just “get over it.” And while the horrors faced by the 86-year-old are reduced to two short sentences in these pages, it’s become all-consuming for the vet.

He explained that upon returning home to Canada in 1946 the nightmares began. “They were always different situations,” Mr. Beaudin said. “They would be of different times I saw in action. I would meet people in the Legion, knowing that they shared similar experiences, but nobody would talk about it; they just tried to live normal lives. I know three people from Little Current who died with this on their chests. Their families suffered terribly, but they were also sworn to secrecy.”

“I wish I could have talked to vets my own age about this,” Mr. Beaudin lamented. “I guess I just brought some of the war back, I just didn’t want to.”

Over the years, the nightmares began to fade, never completely, but the veteran was able to live his life, have a family and keep busy with his community.

In 2004, Mr. Beaudin’s late wife Betty suggested the couple make the trek to Ottawa for Remembrance Day ceremonies at the National Cenotaph, which they did. Mr. Beaudin participated in the parade and laid a wreath at the Tomb of the Unknown Soldier. That night at their hotel, the couple had settled into bed. Suddenly, the sound of planes flying overhead sent the veteran flying to the ground. He began screaming for his wife to “get down” and, when she awoke, she found her husband lying curled up under the hotel bed, terrified.

“Betty didn’t know what was happening,” he shared. “I made her promise me that she would never say a word about what had happened. I thought I was nuts.”

One month later, in December, Mr. Beaudin was plagued with a nightmare, later deemed a night terror, that his brother was calling him and needed his help. The Germans had captured him and he was being held prisoner.

“I had left the house and wandered out into the street in my bare feet, the freezing cold,” he shared. “My wife had to come out and get me.”

Mr. Beaudin explained that now, the house is equipped with an alarm system as these sleep walking episodes continued from that day forward, each one as vivid and horrific as the last.

“I kept it from Betty, I thought I was nutty,” he reiterated.

Eventually, overtaken by the dreams, Mr. Beaudin made himself an appointment with his family physician. “I told the doctor I thought I was going crazy,” he explained. “The doctor assured me that I wasn’t.”

After visits to a counsellor, then a mental health nurse, and eventually a psychiatrist and a psychologist, Mr. Beaudin began to have some light shed on his illness.

“She was a real lifesaver,” Mr. Beaudin said of his local mental health nurse. “She was the inspiration to all of this.”

There were some dark days, the veteran shared. So dark that suicide was thought for a time to be his only option, especially when he learned he would probably never stop having the night terrors but instead would have to learn to cope with them.

“It’s a long road ahead when you know that every week or so you’re going to have a night terror,” he said. “I thank the nurse that gave me hope. I’m still here and glad to be.”

Mr. Beaudin receives extensive therapy for his PTSD, a phrase he only learned in the past couple of years, including weekly check-ins with his psychologist and a once-a-month appointment. This, coupled with visits from his mental health nurse, support from wife Eunice and his daughter Susan, plus a monthly visit to a PTSD support group in Sudbury has Mr. Beaudin dealing with his night terrors more effectively than ever.

When asked if his days of boxing during and after the war (Mr. Beaudin won the wartime Allied welterweight division championship for Canada and is a member of the Canadian Boxing Hall of Fame) helped him cope with the stress, Mr. Beaudin nodded.

When a night terror occurs, he must call it in to his psychologist and take medication for the following two days. Ms. Beaudin said she knows when one of these events is underway because it often begins with her husband calling out or groaning. The next step is to turn on the light and softly and gently remind him that he’s safe in his bed in Little Current. This can go on for 15 minutes if he’s deep in its throes, she explained. The couple will then get up and, for an hour or so, sit and chat, drink hot chocolate and make sure Mr. Beaudin is well and truly awake. When he thinks he’s ready, he’ll take his medication and go back to bed. The next day he’s usually “wrung out,” they said.

The WWII vet has nothing but praise for the support group, called Operational Stress Injury Social Support in Sudbury, whose numbers can range as high as 25, and whose ages range from 26 to others, like Mr. Beaudin, in their 80s. “We talk for between two to three hours about how we are doing and how to help one another,” he explained, noting that War Pensioners of Canada president Colin Pick picks him up, along with other Island vets, and drives him over every month. “It’s terrific.”

Since his diagnosis, Mr. Beaudin has been reading up on PTSD every chance he gets.

“I had no idea that there was this kind of help and that I even had a problem,” he said. “It is beginning to show some light, all of my nurse’s work and others who have helped me, it’s beginning to make sense.” The goal, the couple explained, is to one day have more control over the night terrors, not the other way around.

The veteran pointed through his kitchen window to a tree in his front yard. There, lining the trunk, are 10 rocks. Each one, he explained, represents a comrade he watched get killed, each one with its own personal letter written from Mr. Beaudin as part of his PTSD therapy—his own personal war memorial and a step in the healing journey.

Since his journey to recovery, or understanding at the least, Mr. Beaudin has been gifted with a hand-stitched quilt from the group Quilts of Valour, which he proudly showed this reporter. “Handmade with love, respect and gratitude for your sacrifice to Canada,” it reads. “May each stitch be filled with care, comfort, strength and love.”

“That they could do that for me is just unbelievable,” he said. “It’s so kind, and I don’t even know them.”

“I’ve got no complaints in this world,” the retired Little Current postmaster said. “Life has been really, really good.”

Mr. Beaudin said he hopes that his story will help others with similar situations seek help from their doctor, no matter how much time may have passed and to never give up. Help is just around the corner.