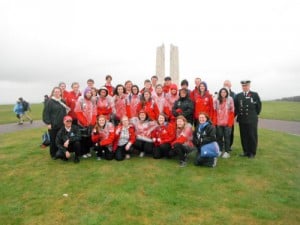 FRANCE—A group of students from Manitoulin Secondary School are spending this week in Europe, with a good portion of the visit dedicated to a celebration of the 95th anniversary of the Canadian capture of Vimy Ridge in 1917 during the First World War.

They, along with thousands of other Canadian students, were to march through a nearby town to the Canadian Vimy Ridge memorial where selected students will place flags on the memorials. During their time overseas, students will also connect with the graves of two fallen Canadians each, paying their respects.

Later this month, one of those students will write for The Expositor, sharing her experience at Vimy Ridge with our readers.

“The journey to Vimy helps Canadians understand the courage and sacrifices of those who fought for a free and peaceful world,” Veterans Affairs Minister Steven Blaney stated in a press release. “The Battle of Vimy Ridge helped define Canada as a nation as we made our mark on the world stage. By teaching youth about the courage and perseverance shown by the young Canadians who fought during the Battle of Vimy Ridge, we are helping to create a new generation that will help shape the future of our great country. The youth here have been witness to the sacrifice of Vimy and will move forward with the same determination as those who fought with pride and conviction 95 years ago.”

He and Canada’s Governor General, David Johnston, were also in attendance at Vimy Ridge for the celebrations. Prime Minister Stephen Harper was unable to attend because France is in the midst of an election.

The battle of Vimy Ridge is considered the first unifying military moment in Canadian history, where Canadian troops fought together as one. Up until this point, the corps had been divided, fighting separate from each other and usually under British command.

Though the battle is not considered as a significant one outside of Canada (it is considered a large battle in the overall Arras offensive), it has been called a ‘defining moment’ in Canadian history by many.

The Germans captured Vimy Ridge, located in the Arras area of France, during what was known as the “Race to the Sea,” where the Belgian-British troops were fighting to beat the Germans to the western front.

The ridge, once fortified, allowed the Germans to fire down on British, French and Belgian troops with impunity, making it difficult for them to move around the Arras district.

Then the Canadians were called in.

Up until this point, the four Canadian corps units had not fought together. They had been the responsibility of British commanders as part of British offensive actions. The battle for Vimy Ridge marked the first time that they would fight side-by-side with each other and under Canadian command.

The plan required the Canadians to lay down more than a week of artillery fire to destroy the extensive trench system created by the Germans on the ridge, damage their weaponry and prevent rations from reaching the troops.

Although a build-up of British and Canadian artillery clearly warned the Germans an attack was imminent, the entire plan could have fallen apart after a Canadian soldier, of German heritage, defected and revealed what he knew of the plan. The heavy fire from the British and Canadian troops prevented a pre-emptive attack from the Germans, as well as keeping their reinforcements several kilometres away and fortifying the German front line.

The Canadians were to advance first to the black line, then the red line, as the areas delineated on maps of the No Man’s land between the British/Canadian trenches and the German trenches. Then, the four Canadian corps would capture the hill, promptly beginning to fortify it so it could be held against the Germans.

The plan was meant to begin on Easter Sunday, April 8, 1917, but the French troops asked the Canadians to reschedule it due to religious reasons. The attack began on April 9, 95-years-ago, at 5:30 am. Within an hour, the black line had been captured, and another two hours had gone by before the red line was also the property of the Canadians.

The only part of the Canadian forces that had not managed to hold to their objective was the fourth corps. One part of the German line had not been shelled extensively and the troops were decimated by enemy gunfire, pinned to their position by the Germans in the bunker, which was nicknamed ‘the pimple.’

By the end of the day, the Germans had managed to recapture a small part of what they had lost, but the British troops moved up behind the Canadians and leapfrogged them to advance to the blue line. By the end of the second day, the only objective not captured was the pimple. That capture happened by the end of April 12, bringing the four-day offensive to an end.

The Canadians captured roughly 4,000 German soldiers, with an unknown number of casualties on their part. The Canadians suffered 10,503 casualties over the four days, with 3,598 killed in the offensive and the remainder injured. Four Canadians, Pte. William Johnstone Milne, Pte. John George Pattison, Lance-Sergeant Ellis Wellwood Sifton and Captain Thain-Wendell MacDowell were each awarded the Victoria Cross by the British Commonwealth.

In 1936, King Edward VIII unveiled the Canadian National Vimy Memoria, one of his few actions involving Canada before his abdication. It had taken 11 years to build and cost, at the time, $1.5 million. The memorial was restored and, in 2007, was rededicated by Queen Elizabeth II. The memorial is now maintained by Veterans Affairs Canada. 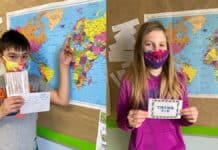 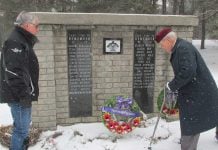 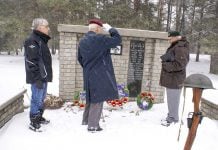 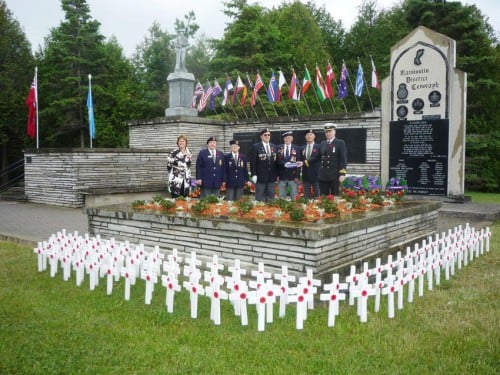 WWI battlefield soil to blend with earth at District Cenotaph 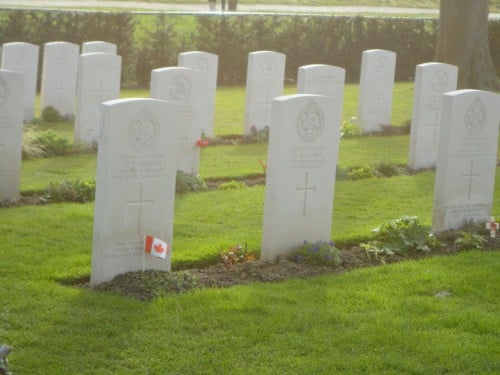