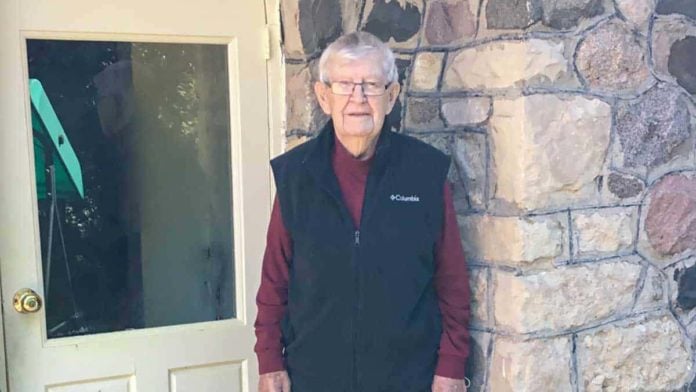 ﻿MANITOWANING—It marks the end of a long era of municipal politics for a current member of Assiginack Township council. Hugh Moggy told The Expositor that he will not be running in the municipal elections being held this fall. He is the longest current member of a municipal council on Manitoulin Island.

“I will definitely not be running in this year’s election,” Mr. Moggy told The Expositor. “I have made up my mind. I have back problems now that make it hard for me to get around and with the pandemic, things have been so different and difficult that I haven’t enjoyed it as much as I have in the past.”

“It seems like a long time that I’ve been in politics, but when I look back, it really wasn’t,” stated Mr. Moggy.

Mr. Moggy, who is 87 years old, pointed out he spent a total of 23 years as reeve of the township and another 23 years as a councillor in Assiginack.”

“Starting in 1962, I spent six years on the Assiginack School Board. That’s how I first got involved in politics,” said Mr. Moggy.

Mr. Moggy began his career on municipal council as reeve of the township, having been first elected in 1969. “I’ve worked with a lot of great people on council, staff and community members over the years.”

“The biggest accomplishment I’ve been part of was the installation of the water and sewer system in Manitowaning,” said Mr. Moggy. “It was 1975 when we first turned the tap on. It took about seven years from the time it started to when the project was finished.”

“I can remember when I first became reeve, the township had plans to carry out the water and sewer installation, but only in the downtown section (of Manitowaning). I said ‘no way, we have to do all areas of the town.’ We had to fight the government to get this done.”

“Another accomplishment was getting artificial ice installed in the Manitowaning arena,” said Mr. Moggy, who was reeve at the time. “I was told by our clerk, John Tilson, ‘son,  we can’t do that.’ He felt we couldn’t afford artificial ice. But with the support of council and the community on that one, we got it done.”

“And I remember when I first started as reeve, the outgoing reeve, Harry Jaggard, tapped me on the shoulder and told me, ‘don’t get involved in the municipal drain.’ This was the second thing we got done while I was reeve.”

Mr. Moggy’s father, Walter, had been reeve of Assiginack for six years, “and was a councillor for quite awhile. My dad being on council is probably where I first got interested in being involved in politics in the community. I followed his lead of listening and talking to people in the community as to what their thoughts were and what they felt we needed in the township.”

“When we were looking at the water-sewer installation, I remember there were seven or eight who would stop in a local store every day, and they were all saying they were going to lose their homes if the project went ahead. I went into the store one day and asked them to attend our council meeting that night and I would explain what was going on and that we could accomplish this.”

“This group of men didn’t attend the council meeting, but they took the issue to the Ontario Municipal Board for a hearing,” said Mr. Moggy. “In the middle of the hearing, the adjudicator said that he would explain everything to them after lunch. No one showed up after lunch.”

“We had to do something, the water and sewers were badly needed, the sewage was bad in town,” stated Mr. Moggy.

“Being involved with the (Manitoulin East) Airport when it opened was another big thing we helped accomplish on council,” explained Mr. Moggy. “We had very good cooperation and worked very well with the Little Current and the old  Howland township (now Town of Northeastern Manitoulin and the Islands.)”

“I was on council when we first had work done on Cardwell Street,” said Mr. Moggy. “The road was blacktopped, and has been redone since.”

“I can remember when I first started, we didn’t have a snowplow in the township,” continued Mr. Moggy. “We had a grader. And our fire truck was a half ton truck with a pumper in the back. I have often thought of those poor guys on the volunteer fire department fighting a fire with that.”

“And we didn’t have a public works garage when I started on council,” said Mr. Moggy. He said the township has plans for a new fire hall to be constructed, but noted that, “a lot of things are going to need to happen before a shovel is put in the ground.”

Being a member of council or as reeve is definitely not the only way Mr. Moggy has been involved in the community over the years. The list of things he has taken part in is extensive. “I started in the 4-H club as a boy then later became a leader in 4-H for five years, and managed a dairy for six years. Then I started to work at the Manitoulin Livestock Co-operative where I worked for 35 years.”

“I did as much as I could to help out in the community,” said Mr. Moggy. For example, he has been on the historical society for a number of years. Marilyn, his wife (of 63 years who passed away in August of 2021), always said that she raised our girls because I was always at a meeting somewhere in the community,” he quipped. “But Marilyn was also quite involved in the community) as well.”

“Jane, our youngest daughter, lives in Parry Sound and comes home a lot,” said Mr. Moggy. “Diane, our oldest daughter is a journalism grad who works for Harlequin Books, and is vice-president for Europe on operations, looking after sales. She has been working with them for 35 years.”

“No, I don’t have any specific plans for retirement at this time,” said Mr. Moggy. “David and Diane have a cottage on Lake Manitou and  they will be here for most of the summer, so I’m sure I will see them a lot. Retiring from politics will be a big change. I’ve enjoyed it, but it is time. I’ve had my share.”