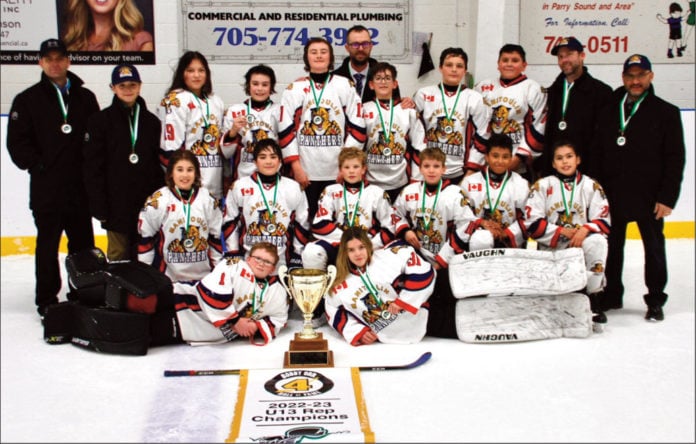 The U13 Manitoulin Panthers team headed south to Parry Sound this past weekend to compete at the Bobby Orr Hall of Fame Tournament and might just have the Midas touch this season winning back-to-back gold medals!

Going into the tournament, they were missing Carter Morrell from their roster, who is known for his speed on the ice, however this team was up for a challenge. Nobody wanted this win more than Bryden Romaniuk whose idol is Bobby Orr and even sports the #4 on his Panther jersey and helped score twice on the Parry Sound Shamrocks to lead to a win throughout the tournament. Lots of encouraging results as Roen Deschenes received his first hat trick while Cohen Rajotte found the back of the net five times in one game. Ryan Carter showed everyone in Parry Sound that size doesn’t matter as he continually battled for the puck gaining possession; Jaxsin Chatwell put his long strides to good use chasing down opponents every shift and scoring. Sean Simon and Kobe Mayers contributed to the scoresheet with a handful of points while solid “D” from Spencer Cortes and Trinity Cheechoo were stellar as a defensive duo keeping the puck out of the Panther end.

Other highlights included: Memphis Shawanda, who had an exciting birthday with a shot from the blue line and received a birthday goal; despite being tripped, Alex Bourcier scored the first goal in the finals; and Lincoln Rancourt was noticed as having a big heart as he was observed giving fist bumps to the refs before each game and scoring the second goal in the finals. Max King, known for his speed and agility took some pressure off when he made it 3-0 in the third period of the final game and Brynn Best and Liam Stephens both had shut outs throughout the tournament!

The U13 Panthers are looking forward to the Silver Stick Tournament in Midland the weekend of December 2-4th to will try and clinch the title again! Congratulations to aforementioned as well as Coaches Scott Stephens, Troy Chatwell, Nelson Deschenes, Clayton Best and manager Dana Rancourt!

Although neither the junior or senior MSS Mustang volleyball teams were able to move on to the all-Ontario OFSAA championships, Coaches Andrew Argall (junior) and Mike Wesno and Derek Debassige (senior) were all pleased with their season overall and the tremendous effort and improvement they showed. Get them next year, guys!

Girls basketball give it their all at NOSSA!

Coach Jon Balfe witnessed his junior B-ball team go from a very young and inexperienced team to fight their way up and make it to NOSSA. At the tourney in North Bay, however they ran up against huge teams with many “club” players and were not able to move on. Great season, girls!

Brooke Gibeault, a well-rounded athlete, has shown that basketball is another sport she excels at! Living in Sudbury for this year, she enrolled in LoEllen, tried out and made the Senior LoEllen Knights. Scouting reports on the youngster are that she plays fast and tenacious defense. The LoEllen team has great depth, however, St. Mary’s from the Sault have been the strongest rivals of the northern teams. LoEllen had lost to them three times but won championship games at a Laurentian Invitational at the start of the season and again in this NOSSA final! They had to get by Korah, the Sault city champions in the semis. Congratulations Brooke, how about volleyball, now?

Trudeau-Paquet shines in another league!

Gregory Trudeau-Paquet, no stranger to this page has taken another path in education and hockey. He is a first-year forward for Sault College where the freshman is studying Early Childhood Education. He was recently named the Player of the Week after recording one goal and two assists in the team’s 7-3 victory over the weekend. Trudeau-Paquet is a strong addition to the men’s hockey program, with nine points in nine games! Keep going, Gregory!

Lisa Odjig, a multi winning World Champion Hoop Dancer remains such an inspirational dancer that she is continually invited to various ceremonies all over. She recently was thankful for the “honour and privilege” to hoop dance for the University of Connecticut Huskies women’s and men’s basketball teams. She was also thankful to be accompanied by friend Christopher Newell of the legendary Mystic River singers drum group.

Celina Cada-Matasawagon has been a star on the fitness and body building circuit for a long time now however she is still at the top of her game. She recently placed second in the Fitness category at the annual event, held in Toronto. Congratulations, Celina!