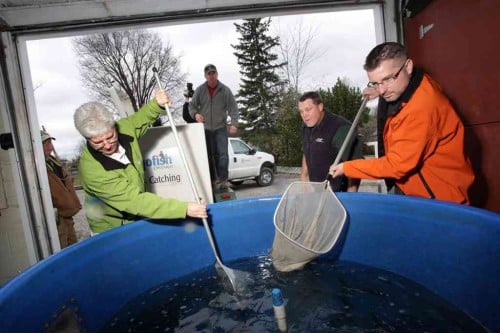 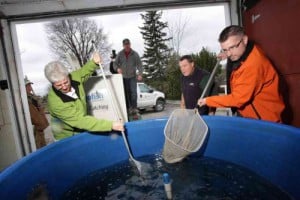 SUDBURY—The recent release of rainbow trout fingerling-length fish into a Greater Sudbury river started with a suggestion from Mike Meeker, owner of Meeker’s Aquaculture in Evansville. The fishy entrepreneur had been working with Vale, formerly Inco, for years on its regreening efforts in Sudbury, and one day recommended the company look at restocking lakes.

That comment led to rainbow trout being raised in Vale’s surface greenhouse in Copper Cliff this past winter. A total of 4,000 healthy rainbow trout were stocked in Onaping River last week, and with the success of this project, Vale plans to raise fish underground at it’s 4,200 foot level greenhouse at Creighton Mine, near Lively.

“When you talk about partnerships you couldn’t get better than this one,” Mr. Meeker stated after the fish were stocked last Thursday, April 19. “Vale is very happy and the MNR (Ministry of Natural Resources) is really happy with the results as well.”

“The fish that were raised in the greenhouse and stocked last week are beautiful fish, about 6-8-inches in length and really healthy,” said Mr. Meeker. “Those fish will weigh between one- to two-pounds by the fall, and next spring will be spawning. In one summer in total they will be catchable by anglers.”

Vale consulted with Mr. Meeker in order to set up the operation and define the operating procedures. Vale also worked with the local office of the MNR to choose an appropriate water body in which to release the rainbow trout.

After five months of feeding and caring, the fish grew to approximately 20 centimetres in length and were transported to the Onaping River for stocking. This location was favoured by Vale due to historical mining impacts on the river system.

“We are very proud of this project and its successful outcome,” said Glen Watson, senior environmental specialist at Vale. “The fish will provide a boost to the river’s fish population and biodiversity, providing a highly valued resource for the community to enjoy.”

“The MNR is pleased to assist Vale with fish stocking expertise from staff in the Sudbury District,” said Lindsay Munroe, acting marketing and communications specialist with the MNR. “Fish stocking and fisheries management is important economically, supporting the sport fishing and tourism industries as well as commercial fishing, providing a source of pleasure to the many people who watch fish and marvel at nature.”

Along with its plans to run a similar operation at its underground greenhouse at Creighton Mine, as an added benefit underground Vale aims to replace chemical fertilizers currently used for tree seedlings with a natural waste fertilizer provided by the fish, thereby creating a unique sustainable fish- and tree-growing operation. Vale will also continue to raise rainbow trout at the surface greenhouse.

Mark Palkovits, land reclamation supervisor with Vale, explained, “we were already using Mike’s (Meeker) (Meeker’s Magic) product for our regreening project. “In our conversations we got talking about fish and I asked him what’s his biggest problem with raising fish, and he told me it is growing them in the winter due to weather conditions. Our underground greenhouse is between 20-24 degrees celsius year-round, every day of the year, which he said is perfect for growing fish. From there, with his help we developed this pilot project.“

“When we do this especially underground, the raising of fish needs to be done with minimal human interaction, maybe checking on the fish once a day or once a week, to make sure everything is running properly,” said Mr. Palkovits. “We are procuring all the things we need to raise fish underground and in the next couple of months we will be rearing more fish.”

“This project has been a huge success story and it has gone global, everyone is calling us about it,” said Mr. Palkovits. “Everyone we worked with is very happy––Mike, the MNR and local fish and game clubs. It has proven to be a very good community project.”

Mr. Watson told the Recorder, “it was a pretty exciting day. Mike felt this would be a great place to grow fish, and we agreed. And we worked with the local MNR to choose a location for the fish to be stocked. They were very supportive.”

“It was a great day,” said Mr. Watson. “And now we have ordered equipment to have fish raised in our underground greenhouse, we’re thinking of raising walleye under ground, and then release in an area lake-river. But we will also continue to raise rainbow trout at the surface greenhouse. I’m impressed with the support our company has given to this project.”

Ms. Munroe told the Recorder, “basically we (MNR) had been approached by Vale about the project, and they were looking for expertise on where the fish should be stocked.”

“It was certainly exciting, for sure to see the fish stocked, we are very interested and supportive of this project,” said Ms. Munroe.

“I love seeing fish going into the water, and it was really, really nice to be involved,” said Mr. Meeker. “Everyone was positive, and this type of program is what we want to see on the island. I would like to see this type of program on the island and that is why the project that we are establishing with walleye through the United Fish and Game Clubs and Gore Bay Fish and Game Club is so important.” 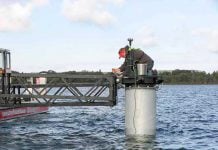 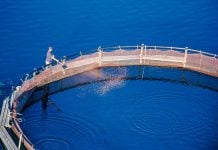 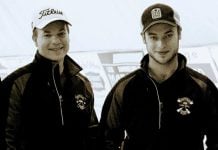