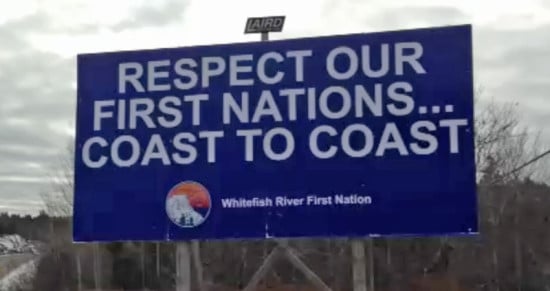 MANITOULIN–Social media and letters circulating among local First Nations communities indicate that plans are play to close Highway 6 and 17 at the Espanola intersection on Saturday morning beginning around 9 am.

Local law enforcement officials indicate that although they have heard the rumours, as of this morning no official communication had informed them of any definite plans. “We have heard some indications that things may be planned, but we have not been contacted yet about definite plans,” said Manitoulin Detachment Commander Kevin Webb. “We have been in discussion with some groups, but I gather that some of their plans have been changed.”

Residents of local communities have, however, reported receiving letters urging them to come out to take part in the Saturday rally as well as a protest rally in Sudbury starting at 10:30 am that will then make its way to the Indian Affairs office.

Local and regional First Nations leaders note that these protests are bubbling up from a grass roots who are frustrated at the lack of progress being made and what are seen by their communities as repeated assaults on Aboriginal and treaty rights.

“It isn’t just about the First Nations,” noted Anishinabek Nation Grand Chief Pat Madahbee. “This Bill C-45 (the Harper government’s omnibus budget bill) is 400 pages and it is so big, hardly anybody knows what is in it. There are a lot of people upset with what is going on in this country right now and they are not going to put up with it.”

Whitefish River First Nation Chief Shining Turtle said that he planned to attend the Friday events in Sudbury and the Saturday protests at the intersection of Highways 6 and 17.

“It is frustrating to all of us,” said Whitefish River First Nation Chief Shining Turtle. “We have been trying to get the federal government to listen, to engage in the consultation they are obliged to do, but it has been like yelling into a giant vacuum. “People are upset, they are upset about this government riding roughshod over our treaty rights and obligations and they are not going to take it anymore,” he said. “All the words have been said, it is time for action.”