LITTLE CURRENT—While he is in favour of leaving the swing bridge in place, a Little Current resident has presented a new type of “immersion tunnel” system option that has been used in other parts of the world at a recent public information session for the swing bridge study.

“My preference is to have the old bridge maintained and continue to be used, I’m a big heritage guy and I love the old bridge,” stated Bill Caesar, last Friday. “But if can’t be made safe for the long term, we have to look at alternatives; keeping in mind the requests from local businesses that the town not be disrupted too much.”

“In some consulting I’ve done with different representatives it appears there is no way a car ferry service could be set up, and basically a fly over bridge would be expensive and take traffic flow away from the town (Little Current),” said Mr. Caesar. “They also say a tunnel way too expensive, but one option they didn’t include at the meeting was immersion tunnel concept, which has been put in about 200 places throughout the world; one is being constructed between Germany and Denmark that is 15 kilometres long. It is well tested system.”
Mr. Caesar explained, a tunnel ‘element’ would be built on land, by a manufacturer that constructs tunnel elements, for example between 200-600 feet long. One in Virginia, the Midtown tunnel, has a total of 11 elements that add up to 350 foot each. “By having these elements built on ground, no drilling would have to take place. A ditch would be built across the channel (east of the current swing bridge) deep enough that the element(s) could be sunk into it so the top is flush with the water bottom of the channel. With this option the swing bridge could remain open-as a heritage site, it is deserving of being given this type of heritage consideration, after all it is 105-years-old.”

Mr. Caesar outlined several advantages of the immersion tunnel, first that it would leave the heritage swing bridge as it is welcoming people to Manitoulin. “There would be no more waiting; with two lanes and a bicycle path, there would be uninterrupted flow of vehicles and vessels of all size,” he said. “Present businesses would be unaffected if present approaches were used,” pointed out Mr. Caesar. As well, the current solution “would be the most cost effective method, particularly for short crossings.” He pointed out there is no snow removal required and would be maintenance free compared to mechanical structures. 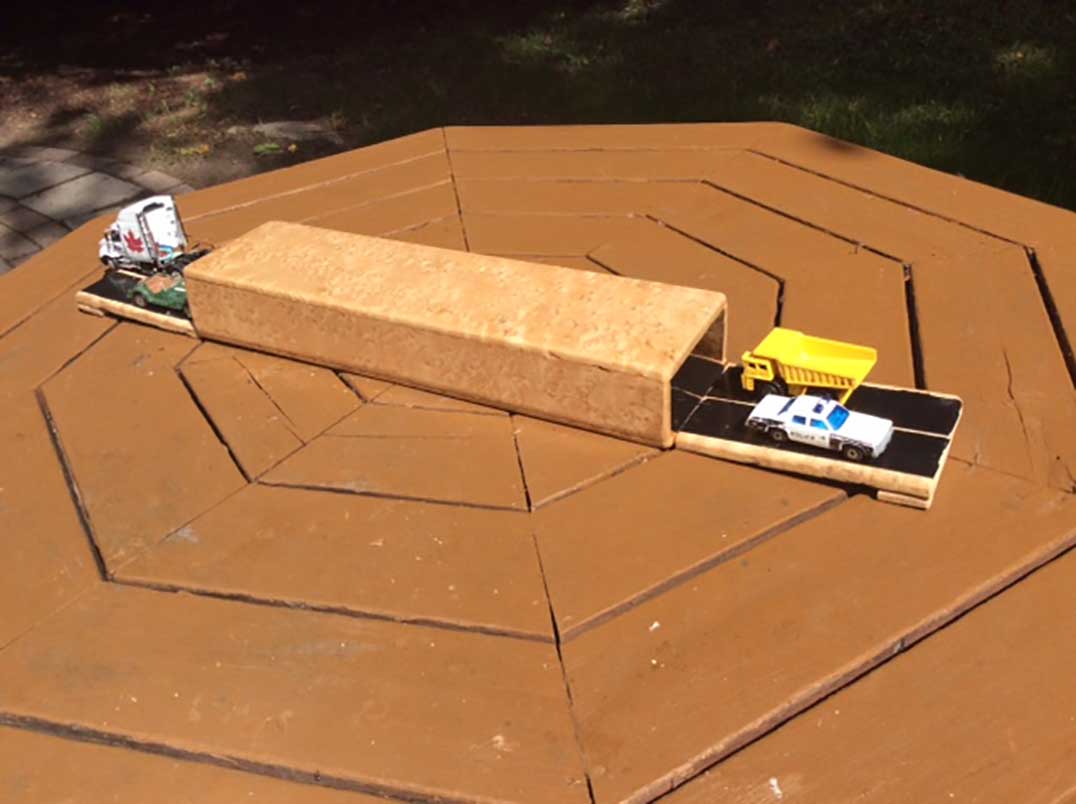 The immersion tunnel concept has been tried and tested. The first one was built in the Detroit River in 1910 and there are over 200 in existence world-wide today, said. Two projects are being carried out currently, the Midtown tunnel in Virginia and the Fehmarn Belt, from Germany to Denmark, that is 15 kilometres long and has multiple elements.

“One element of less than 500 feet would span our channel,” said Mr. Caesar, who noted the present bridge span is 368 feet.

“If it is possible, this amazing type of channel crossing would benefit the Island the most,” said Mr. Caesar. “It seems to be the most practical, and the most cost effective way,” continued Mr. Caesar.

“I wrote out a proposal for the meeting and I hope that it will be considered,” said Mr. Caesar. “My neighbour Jim Strong suggested the name for it, the ‘Little Undercurrent’.” He also noted that with the immersion tunnel, the same exit and entry points would be used, so it would not be a system that would cut out the new hotel or other businesses in Little Current.

After the public information centre meeting Gore Bay councillor Jack Clark, who attended the meeting on behalf of the town said, “five options were presented. One was to do nothing: maintain the current swing bridge; a car ferry, which would require docks on both sides; a tunnel; a moat type bridge and lift type bridge (two lane); and a high spire bridge. I spoke to the representatives on hand and said that in my opinion, the car ferry makes no sense, and do nothing would not alleviate the problems concerns with the bridge being at the end of its service life. And I was concerned that the lift draw type of bridge still would leave us with a mechanical structure that could fail, particularly in an emergency situation. The immersion tunnel option brought forward by Bill Caesar seemed to be the most appealing option.”

The MTO and Stantec Consulting Inc., have indicated that the swing bridge requires extensive and ongoing maintenance, and is nearing the end of its service life. The study is expected to take three years to complete and will be broken into three phases. The first phase involves a transportation needs assessment and will look at the big picture alternatives, with the five options being keeping the current swing bridge, a car ferry, tunnel, movable bridge or a fixed bridge.

Phase two will develop the alternatives in more detail with one final option selected, while phase three will see the development of a plan a, a Transportation Environmental Study Report, which will have a 30-day comment period.