Balancing openness of government with administrative efficiency while coping with ever increasing workloads is an ongoing challenge. Witness the last two council meetings in Billings, for example, though I am sure other smaller councils have similar challenges. A communication from an outside body on the agenda at one meeting was dispensed with nominal due diligence, and an acquiescence sent back to said body. Within days, local media had flagged this “acquiescence” and citizens were up in arms protesting that decision. Citizens research and their due diligence found that in this area, municipalities in Ontario have had their jurisdiction largely removed and elevated to the provincial level so anything they say or do on the matter has no legal standing but it can at least convey “moral suasion” indicating the community’s preferred action, and in this case council misread the prevailing feelings in the community.

All that has been more than adequately covered in local media, and through delegations to council so I won’t belabour the point here. What I will cover is the clear indication to me that this series of events appears to be a consequence of the increasing workload, and different attempts over the last few years to respond to that. Those like me who have attended many council meetings over the last decade have seen progress. Not too long ago, agenda items were discussed/elaborated on and motions were written dynamically (usually pencil and paper–lots of last minute amendments), movers and seconders selected and the full motion was read into the record and voted on. Sometimes there were so many amendments, I suspect the clerk would have some difficulty transcribing what was finally voted on.

Now we appear to have gone to the other extreme. Motions are written prior to the formal meeting, movers and seconders already appointed, and it seems to me, this has rendered the council meeting as a PR exercise, simply rubber stamping what has already been decided in some other place, and that, aside from the questionable openness issue, due diligence may now be suffering. But don’t worry–Darlaston to the rescue!

I noticed the clerk’s adeptness with the microphone system at the public meeting and it got me thinking! Fifteen to 20 years ago, in my I/T consulting practice, I got interested in speech recognition, which promised to herald a new era, and looked to be a burgeoning market for me. Sadly, it turned out the technology needed 15-20 years to mature. But mature it did, and now there are sophisticated moderately priced software applications, some aimed at legal professions (like the drafting of bylaws for example), that come with nifty little Bluetooth headsets, and the clerk and council could capture so much information on debate and decision making in council (and hopefully saturating the public with it) that no-one, not even me, would complain again about lack of transparency and information. Heck, I’d even consider setting it up for council–pro bono! 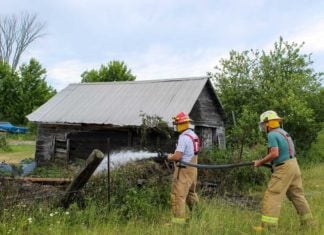 Tom Sasvari - June 23, 2021
GORDON/BARRIE ISLAND - Members of the Gore Bay Fire Department responded to a grass fire in a Gordon/Barrie Island location on Thursday of last...