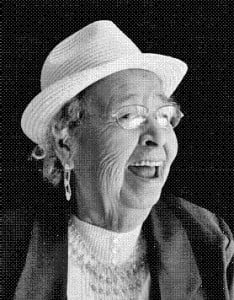 In loving memory of Isabelle “Auntie” McGraw who peacefully began her spirit journey at the Health Sciences North in Sudbury, Ontario lovingly surrounded by family on the eve of Thursday, March 20,2013 at the age of 80 years. Isabelle was the great-great-granddaughter of the late John Assiniwe (Josette Holmes), great-granddaughter of William Assiniwe (Elizabeth Trudeau), granddaughter of Joseph Assiniwe (Agnes Gaiashk) and daughter to the late Matthew Jacob and Evelyn Assiniwe (nee Waindubence). Isabelle is the wife of the late John McGraw. Predeceased by son Maxi Assiniwe, and lovingly survived by son Stephen and daughter Wendy McGraw. Cherished grandmother of Derek (Rita), Adrienne (Tod), late Carleton (ThunderBoy), Chad and Maggie Lesage. Cherished great-grandmother of Cole, Eric, Isabelle and Gabrielle. Dear sister of Raymond, Julius (late Mary), Jeanette (Darcy), Norman (Francis), Thomas, Josephine (Pean) and Henry Shawana. Loving godmother of Mary Pheasant, Kenneth Shawana, Ricky, Bill, Stuart and Ann Assiniwe. Special aunt of many nieces and nephews. Born in Wikwemikong, January 25, 1933, Isabelle grew up in Rabbit Island, satellite Community of Wikwemikong Unceded Indian Reserve. As the eldest of seven children, her parents asked her to work at the age of 14. Isabelle met her husband John when he was playing guitar in a band. Together, they were foster parents to many children. Then, they found the two they wanted to spend the rest of their lives with, “Stephen and Wendy” and their family was complete. Isabelle became a RNA working at the Manitoulin Health Centre and continued her career at the Wikwemikong Nursing Home, where she enjoyed 25 years of caring for the elderly until her retirement. Throughout her life Isabelle was an exceptional fundraiser. She helped with the maintenance of the Rabbit Island Community Centre and assisted in the restoration of the Jennesseaux Hall. Isabelle was generous in sprit and graciously donated many years to Holy Cross Church and Manitoulin Health Centre Auxillary. One of her many joys was visiting her friends Marjorie Spanish, Eleanor Abel, Lillian Webkamigad, Josephine and Rose Pelletier, Stella Osawamik, Nora Miangagowi, Josephine Trudeau and many others. Isabelle enjoyed making birch bark canoes and tipis, taking trips all around town, going to the casino, and playing bingo and pokeno. She enjoyed time with her grandchildren (all of whom brought her much joy), visits with her siblings and her many nieces and nephews. Isabelle had a playful spirit, a great sense of humour and a smile that could light up a room. When she dressed up in costumes everyone had a laugh. She will be remembered for her strong faith, kindness, generosity and joyous laughter. She was an amazing woman, the pillar of her family. She leaves a wonderful legacy of love for her family and friends. She will be lovingly welcomed home (baamaapii kaawaabmin). Isabelle rested at the residence of Julius Assiniwe, 557A Rabbit Island Road on Friday, March 22, 2013 from 5 pm until time of the funeral mass on Monday, March 25, 2013 at the Holy Cross Mission. Interment Wikwemikong Cemetery to forever lay peacefully beside her sister Pean. Online condolences may be left at culginfuneralhome.ca. Culgin Funeral Home, Gore Bay, 705-282-2270.