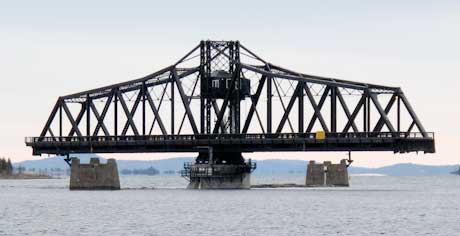 CENTRAL MANITOULIN—Retirement holds no fears for Ruth Frawley despite her 40 years in public service. The Central Manitoulin CAO/clerk already has an eye on expanding her gardens come this spring.

“I started work in January 1982 with the Township of Sandfield,” said Ms. Frawley. She went on to serve that community for 16-and-a-half years before the amalgamation of Sandfield, Carnarvon and Campbell Townships on May 1, 1998 created the Municipality of Central Manitoulin. She would go on to serve Central Manitoulin for the next 24-and-a-half years.

“I served under Sandfield reeves D.O. Cannard, Doug Becks, Jack Hayes and David Spry,” she recalled. Then going on to serve reeves (then mayors) of Central Manitoulin, including Perry Anglin, Mary Nelder, Gerry Strong and Richard Stephens, “and council members too numerous to mention,” she laughed.

Among the projects Ms. Frawley is most proud are those that helped bring the municipality’s communities closer together, including the completion of several bridges: Blue Road Bridge, Monument Road Bridge, Grimesthorpe Road Bridge, Ketchankookem Trail Bridge, Case Road Bridge, Union Road Bridge and soon the Townline Road Bridge in partnership with Tehkummah Township.

The successful completion of the new Mindemoya Fire Hall and a Welcome Centre in the community also rank among her proudest accomplishments.

“The most difficult thing that happened in my career was, of course, the COVID pandemic,” said Ms. Frawley. “It was very stressful, not just for me, but all my staff. Things and rules changed day-to-day and to keep up with it all was difficult. Thank goodness for such helpful municipal staff.”

Ms. Frawley was effusive in her praise for the municipal staff team. “I could not have done my job without the rest of staff’s support and help,” she said. “I have made many good friends throughout my work career.”

Unlike so many senior managers in today’s hyper connected world, Ms. Frawley does not own a cellphone. “I never have,” she said. That doesn’t mean she was ever out of the loop, however. “I have my iPad,” she said. “That is good enough for me.”

Ms. Frawley said that despite the challenges, she looks back on her career fondly. “I have always loved my job,” she said. “There are so many facets to it and every day was different and interesting.”

The retiring CAO said she is looking forward to retirement, “when I will have more time for my flower and vegetable gardens and maybe get back into my pottery studio.”

Just because she is stepping away from the hurly burly of managing the municipal staff, Ms. Frawley assured The Expositor that she has no plans to fade away. “I plan to continue being an active member of the Central Manitoulin Lions Club where I am the current treasurer and the Central Manitoulin Historical Society, where I am also the current treasurer.” Other volunteer opportunities will no doubt come up, she laughed, aware of the fate of other retirees in rural community.

“I feel that the administration of the municipality is being left in good hands with the appointment of Denise Deforge as the new CAO/clerk,” said Ms. Frawley, citing Ms. Deforge’s 20 years of experience working for the municipality.

Looking ahead to what challenges will face her successor, Ms. Frawley didn’t skip a beat. “Landfills,” she said. “Landfills are always some of the most difficult things to deal with.”

As for travel, Ms. Frawley is looking forward to having more leisurely time to spend visiting her son in Calgary.

Kathy McDonald retired after 19 years as CAO for Billings Township

She applied for the vacant CAO/clerk position in Billings and was hired. “I hadn’t worked in a municipal office previously but as a property assessor, we had created the assessment rolls for municipalities on taxes, so I was familiar with this, which was a help.”

“Ninety-nine percent of the time I have enjoyed the work (with the township),” stated Ms. McDonald. ‘’I have really enjoyed working with the current municipal staff. They are all terrific people, and everyone really works together. That is one thing that I am going to miss: the people.”

Ms. McDonald noted that during her time as CAO/clerk, “most of the time I have been here, Austin Hunt was the mayor. I learned so much from him over the years.”

“And Councillor Sharon Alkenbrack had a lot of great ideas that she came up with for downtown Kagawong,” said Ms. McDonald. “She is responsible for many things like the cedar maze and the stone labyrinth, the huge checkerboard game set in the downtown area that locals and areas can play, and many other ideas that she or the economic development committee came up with. She will be greatly missed, not only for her many great ideas but for all kinds of events that she helped spearhead or participated in.”

As for highlights or projects that she is most proud of helping to participate in or developing while working for the township, Ms. McDonald said, “I think the easiest project was the replacement of the equipment in the water treatment plant. OCWA (Ontario Clean Water Agency) did the engineering and project management on the project, on budget, and with no issues.”

“The project that 4elements Living Arts and the connection trail was the most difficult and hardest to work on, and stressful for all committee members who participated. But it was a huge, beneficial project for the township.”

Helping to establish the Old Mill Heritage Centre was another highlight, said Ms. McDonald. “There are just too many projects to name them all: like rebuilding the Maple Point Road around 2006-2007, the rebuilding of the Main Street Hill and the Small Craft Basin project, the many upgrades at the waterfront, and the township has worked very well with Manitoulin Streams Improvement Association (MSIA) on river restoration projects.”

“The projects that were accomplished in the township were with the staff and council working well together to achieve these objectives,” said Ms. McDonald.

The duties of being a CAO/clerk have changed substantially over the years, she said. “There has been a huge increase in the workload, some of it being as simple as increased emails; when I started, we were using dialup. And the number of projects and the amount of work involved with them has increased.”

She noted the government grant application process has increased in work over the years, as have requests for proposals and project management. “We now have a project manager that takes over on those responsibilities.”

“There are increased financial pressures as demand for service increases and council tries to keep the tax rates low,” continued Ms. McDonald.

“I’m not actually retiring, I’m just tired,” quipped Ms. McDonald. “I’m not sure at this time what I’m going to do after I leave, but one thing it will include is spending more time with family, especially my grandson.”