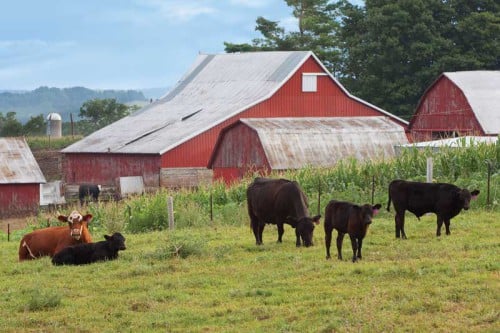 SPRING BAY—There was a great deal of information to be had at the joint Annual General Meeting (AGM) of the Manitoulin Cattleman’s Association (MCA) and the Manitoulin Soil and Crop Improvement Association (MSCIA) at the Spring Bay hall on January 23. Perhaps the most startling information for members came near the end of the meeting when Jim Martin expressed his amazement upon hearing Tony Clement, MP for Parry Sound-Muskoka, while on a radio show, talk about eliminating beef from Canada’s Food Guide.

However, Hasan Hutchinson, director general of nutritional policy and programs at Health Canada which supplies the Guide, said, “We’re not talking necessarily eliminating animal foods altogether, but it is going towards more plant-based; words that are not sitting well with cattlemen who have already seen a drop in beef prices since 2016.

Secretary/Treasurer Brent Best presented his report to members on the 2017 BFO AGM held in Toronto which he attended along with Mr. McNaughton and Mr. Miller.

The business portion of this meeting started with an address from Matt Bowman of the Temiskaming District who is the newly elected president of the BFO. As Mr. Best said, Mr. Bowman fully acknowledged the current challenges to producers including the fact that beef prices plummeted in 2016 and have stayed low. Mr. Bowman also announced the opening of a new cow-calf research station in Elora, slated for this summer, to which the commitment from the BFO will be $1 million in funding over the next several years. He also stated that the national portion of the mandatory checkoff fee is expected to increase although studies have shown that for every $1 contributed by checkoff, the producer receives $14 in returned benefits. Also of note, the checkoff is now applied to imported beef. This started last year and now accounts for 12 percent of that revenue.

The next person to address the members was the Hon. Jeff Leal, the Ontario Minister of Agriculture. His goal is to have at least five other provinces collaborating to develop the next phase of the Risk Management Plan and Growing Forward 3. The provincial government will negotiate with the individual States to facilitate cross border trade in the absence of a cooperative Trump administration. Former BFO President at that time thanked the minister for the additional $75 million in funding secured for the Risk Management Program (RMP) for Ontario farmers.

The next item on the agenda for this 2017 meeting was an update on the Ontario Corn Fed Beef Program which showed new partnerships with restaurant chains and food service distributors and now the exporting of this type of fresh and frozen beef, targeting USA, China, Japan and the Middle East. Corn-fed beef now represents half of all feedlot cattle processed through federally inspected facilities. More head are anticipated in the future to keep up with demand.

Mr. Best then spoke of the remarks by Dan Darling, who is president of the Canadian Cattlemen’s Association and who had just returned from Washington. Mr. Darling stated that there is acute uncertainty with the new administration in the US on what their next steps will be and no clarification at all on previous statements on the future status or renegotiation of NAFTA. Also, under the pending Trans-Pacific Partnership (TPP), import duties of imported beef into Japan would be slashed which would put Canada’s corn-fed beef more on a level playing field with Australia. But, as time told, the TTP has not been ratified by the Trump administration. Mr. Darling believes that the remaining nations will re-convene to negotiate an agreement.

Indeed, on January 24, Prime Minister Justin Trudeau announced that exactly on the anniversary of the United States withdrawal from the TPP a trade agreement was reached between the other 11 countries and had been signed in Tokyo. It is expected that the agreement will be ratified by March.

Anne Wasko, market analyst for Gateway Livestock in Saskatchewan, was a guest speaker at the conference and talked of the downward spiral of both the price of beef and also of the dollar in 2016 and stated that a falloff in the retail and wholesale price of beef is expected as well as an uptick in volume as it becomes more competitive with pork and poultry. Exports account for half of production with sales to China down, but up to Japan by 40 percent. Ms. Wasko went on to explain that the Canada-Europe trade agreement will be ratified and that even though its effects on the market will be slow, it sets a free-trade commitment in an era of American isolationist policy. She added that globally, the trade situation and the weather factor are currently unpredictable.

It should be noted that the Comprehensive Economic and Trade Agreement (CETA) was, indeed, signed by Europe and Canada with this country seeing a 98 percent elimination of tariffs with the European Union (EU). NAFTA members Japan and Mexico have also joined CETA.

Also speaking was Professor Sylvain Charlebois of Dalhousie University who spoke on consumer buying trends. To him, the ultimate CEO of the food supply chain is the end consumer, confronted with a myriad of choices in the restaurants and grocery store aisles with Ontario being the tightest market for food bargain hunters whose decision are mostly influenced by price. To this end, “retail giants are squeezing the suppliers and wholesalers by demanding discounts,” Mr. Charlebois said. He next talked of food fraud and explained that 40 percent of Canadians surveyed believe they were victims of deception in their food purchases and that public regulators are needed to enforce transparency and distrust a self-policing food industry. Food fraud, as Mr. Charlebois said, undermines consumer confidence and hurts other producers. Most recently, Loblaws Companies Limited admitted participation in an industry-wide bread price fixing plan. Loblaws is offering a $25 gift card to Canadian consumers in light of this action. “This conduct should never have happened,” said Loblaws CEO Galen Weston, the third richest man in Canada.

Mr. Charlebois noted that some countries in Asia have the technology to empower consumers with tools for in-store testing.

Mr. Best also spoke of the resolutions from the county associations to the Board of Directors and voted on by the BFO delegates to this meeting.

“They were mostly congenial votes to set the future direction and priorities of the association such as lobbying for greater predation and compensation and relaxing of possible future changes to livestock transport regulations,” Mr. Best said, and went on to add that the lengthiest debate, and a divisive issue in some counties, is the resolution to encourage the local organizations to drop the Cattlemen’s name in favour of Beef Farmers to align with the provincial group. “Only a few have already done this,” Mr. Best noted, “nevertheless the resolution passed at a rate of 56 percent.”

EDITOR’S NOTE: Please see next week’s Recorder for part two of this story.