AMSTERDAM – It was always going to be an exciting year for 26-year-old Courtney Recollet of Wiikemkoong who is following a career in operational planning for sports events, she just didn’t anticipate just how the year was going to unfold when she set out for Europe in mid-February and a new job working on the EURO2020 (European Football Championships). The sudden onset of the COVID-19 pandemic swept her job away, along with the hordes of tourists that normally would have crowded the streets.

“I did not see this coming,” said Ms. Recollet, who had booked a month in an Amsterdam hostel while she sought an apartment for the coming year. “I wound up quarantined in the hostel.”

The changes in her circumstances came on like an avalanche.

“One morning, everything was normal, everything was fine,” she recalled. “Then around halfway through the day, people were watching the news on their phones, on their tablets, on computers. Everyone stopped for like an hour or so glued to their devices and watching the prime minister,” she said.

It was March 16 and the prime minister was announcing that all events for 2020 were cancelled. Bye-bye job—hello four walls in a room by yourself in a hostel. On the bright side, she currently has a job in that hostel.

There were nine staff members remaining at the hostel and each now had their own private rooms but none of them could leave the building except to go for groceries or the pharmacy. All of the tourists in the hostel left to return home.

“It was very quiet here, Amsterdam was completely empty,” she said. But on the bright side of that, as restrictions began to lift and the streets still remained largely deserted, the Anishinaabe-kwe got to see the city in ways that would have been impossible just a few weeks earlier.

Ms. Recollet admits to a tinge of homesickness, but she was prepared for that when she set out to spend the year in Europe. As for racing home, she said she felt there was little reason to buy a panic ticket.

“I was talking with family back home and realized that really, there wouldn’t be that much difference,” she said. Thanks to technology, she really isn’t any more isolated from family and friends than she would be under lockdown in Wiikemkoong. “I talk to my family just about every day and keep in touch,” she said. “There are some really good people here at the hostel.”

Ms. Recollet is using the downtime to learn Dutch and whenever she has a chance she takes in her uncle Isadore Toulouse’s Anshinaabemowin classes online, along with some professional development seminars. “There’s a six hour time difference,” she said, “but I log into my uncle’s classes whenever I can. This is the perfect time to learn a new language and improve by own.”

That time is well spent, but has its own challenges. “It can be very frustrating,” she admits of learning Dutch. “It is very different.”

She describes the journey into her current career as almost accidental. “I was actually planning to become a police officer, but I got a job working for the Pan Am Games in Toronto in 2015.” Turns out she had a knack for it. “It was a great opportunity and I did a lot of networking. I kind of just fell into it.”

Other opportunities just kept coming, including working for the Invictus Games in Toronto in 2017 and the 2018 Commonwealth and Arafura Games in Australai—and yes, she did get to meet royalty on that gig. (Britain’s Prince Henry, Duke of Sussex founded the Invictus Games). “I was working as a venue transport supervisor,” she said.

As to why she has continued working in international sports events, Ms. Recollet didn’t hesitate. “I love it,” she said. “I never saw this for myself, never thought I would now be in my third country doing this kind of work.”

Although Ms. Recollet said that she doubted she could stay in Amsterdam until the games return in 2021, she was not giving up her stay in Europe just yet. “I will see if I can get my visa extended,” she said, turning her eye to events that are shaping up in nearby Germany.

As to what advice might Ms. Recollet have for other young Anishinaabe looking toward the future and potential careers, Ms. Recollet drew on her own experiences. “Always seek opportunities to learn and grow,” she said, “and don’t forget to network and make professional connections.” 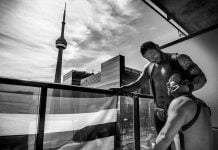