GORE BAY—Norm Morrell has been an auctioneer for 44 years, bringing his gavel down on successful bids for everything from farm equipment to entire estates, cars, boats, and all manner of antiques and collectables since 1978 yet he’s particularly thrilled about the next one, this Saturday, July 23, in Gore Bay.

The Jack Whyte Art Auction marks the first time Mr. Morrell has done “an auction of just art,” he says. “Ninety-six pieces made by the prominent and beloved artist Jack Whyte, who lived and worked for many years out of the studio that was his home in Gore Bay. Very exciting!”

To art lovers, artists and creative types of all stripes, Manitoulin Island is an overflowing cornucopia of artistic delights. “There are more world-renowned artists per capita on the Island than anywhere else in the world,” notes Mr. Morrell. To the artist Jack Whyte (1939-2018), Manitoulin was a rich, unending wellspring of inspiration during the entire span of his prolific career.

Mr. Whyte loved summers spent at his parents’ cottage in Gore Bay in the 1940s. The budding artist was marked by his first trip to Manitoulin. “I had never experienced such a landscape with its pock-marked limestone pavements, glacial boulders and clear skies …. There was no electricity and the nights were black.” He built his home studio in 1970, across the driveway from his parents’ place, tucked into a cedar grove inside the town’s limits.

This is where he began developing his singular approach to artistic invention, pursuing new outlets in all media with his wide-ranging imagination. Best-loved for his line sketches, drawings, paintings and painstakingly precise collages of Manitoulin town and country scenes, powwow dancers and disappearing landscapes and ways of life, his popularity as an Island artist swelled through the decades; his annual solo exhibition at the Gore Bay Museum became a highlight of the Island’s cultural calendar.

But Jack never just stopped there: he was a passionate experimenter who produced graphite drawings, photographs, birch bark mobiles, stained glass panoramas, graphic magazines, all made in studio and displayed in the windows, affixed on the walls, floors and ceilings and stacked on every surface of every room. Embedded in the furniture and crockery were examples of Jack’s virtuosity; all manner of found objects found their way into his quirky ‘Assemblages;’ no square inch of his home studio was left without his ingenious touch.

Mr. Whyte’s son Dylon Whyte and partner Ashley Whyte, freelance artists with backgrounds in graphic design and independent publishing, have organized some of Jack Whyte’s art into 96 lots that will go under Norm Morrell’s hammer this Saturday. Widely known for their Manitoulin Colouring Book series, the two are also the managers of Jack Whyte’s collected works

“Jack’s life was bigger than any space could contain,” says Dylon Whyte. “He always worked with what he had – a colander, razors, caps, pens, broken objects – everything became part of a story.”

The family “had no resources,” Dylon continues. “There was not a lot of paint in the studio, so Dad cut up magazines to make his collages – he loved the LCBO magazines because they used really good quality paper.” Taking apart a magazine, Jack first arranged the subtle colour gradations into a palette on a light table, then sliced the paper with the razor-like blade of an exacto knife, each fine cutting laid out to form what would look uncannily just like brushstrokes in a painting once he was finished.

“Many of the ideas Jack Whyte explored were political,” says his son, whose home was his father’s studio. “He communicated his feelings on the threat of development in Carter Bay, for example; he commented through his art on the destruction of the environment, on poverty and the North, and on the horror of Indigenous children taken from their families; he painted the blank, lifeless faces of people stripped of their identity in urban settings.

“Jack felt that the identity of ‘artist’ was discriminated against, there was no status accorded to the profession of artist, so he could identify with the dispossessed; he considered himself different, displaced, a rebel. His more challenging works were not as readily accepted, but he was committed to making art that was not just beautiful but communicated the depth of his thinking and feeling.”

Amongst the varied art works of paintings, sketches and painted furniture at auction are the only two watercolours he ever made, his first collage – half-finished, on cardboard – looking down at Honora Bay, and some of the ‘Assemblages’ made during the last two years of the artist’s life. “And there are Renaissance-style portraits in oil that could be forgeries of the great masters, such was his skill!” exclaims Dylon.

“Norm Morrell has been receiving reserve bids. There are no minimum prices set in the auction,” adds Ashley. “Anyone can afford a piece of Jack Whyte’s art!”

“The auction is all Island art,” say the Whytes. “It’s a testament to the fact that Jack could do anything. He was always practicing art; he lived his life in art. He regarded himself as his own art experiment and he always wanted to be surrounded by art.”

The Jack Whyte Art Auction takes place on Saturday, July 23 at the Gore Bay United Church, 19 Meredith Street, Gore Bay. Viewing of the art begins at 9 a.m. and the auction starts at 11 am.

To view all the art pieces online visit www.theauctionadvertiser.com.

Payments on successful bids may be made by e-transfer. 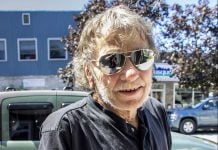 Jack Whyte: A celebration of life