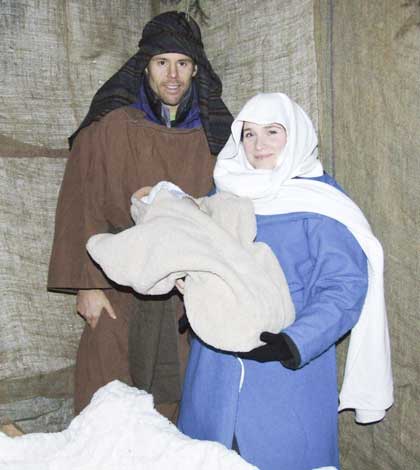 MINDEMOYA—The marvel that is the Christmas Story is retold through the auspices of yet another marvel, as churches and community members—even livestock—come together from across Central Manitoulin to perform the ecumenical wonder that is ‘The Journey to Bethlehem.’

Every year, a massive cast drawn from the community and dressed in period costumes of robes, armour and feathers brave the cold bitter winds of early December for hours on end to reenact the story of the birth of the Christ Child from the journey of the pregnant Mary and her husband Joseph as they make their way to report at their city of birth (Bethlehem) to be recorded in the grand census ordered by Augustus Caesar, the Roman Emperor of the day.

To facilitate parking, visitors to the grand Christmas pageant first arrived at the Mindemoya Missionary Church, whose copious lots combined with that of the public school ensure plenty of room for the safe assembly of the audience.

Buses shuttle the pilgrims up the highway to Our Lady of Canada Roman Catholic Church where they were ushered into the warm embrace of the church hall and entertained by a mini-play featuring a bellicose King Herod (Glenn Black), some hapless Roman guards and quivering servants, and the bemused Three Kings whose arrival following the Christmas Star heralds the birth of the Christ Child.

Groups of ‘families’ of about 12 in number were placed under the watchful eye of robed and lantern bearing guides who brought the pilgrims down a lamp lit pathway, stopping at several stations along the way to converse with shepherds guarding their flocks by night, beggers who sought to steal the pilgrims’ small sack of tax coins, aggressive Roman soldiers in no mood to brook reluctance or sass, the pregnant Mary with her husband Joseph, a bustling market filled with pickpockets after the same coin sack, sheep, horses and a choir of angels before arriving at the inn and the newborn baby Jesus (played with some stellar authenticity by a real newborn) cradled in the arms of Mary and Joseph.

The Journey to Bethlehem community pageant takes place over the course of a Friday and Saturday and draws hundreds of visitors from as far away as Sudbury, the North Shore communities and Sault Ste Marie each year. “We even had people from Parry Sound and Vaughn come up just to see it,” said Monique Shaw, who noted that there were over 350 people going through the pageant this year alone. “We have a lot of people who help out too,” she said. “There were over 60 people in costume alone this year.”

In a time where sectarian violence seems to grip the globe at every turn, the ecumenical embrace of the churches of the Manitoulin community set a standard for tolerance most befitting of the story of the birth of the one who was heralded as the Prince of Peace.